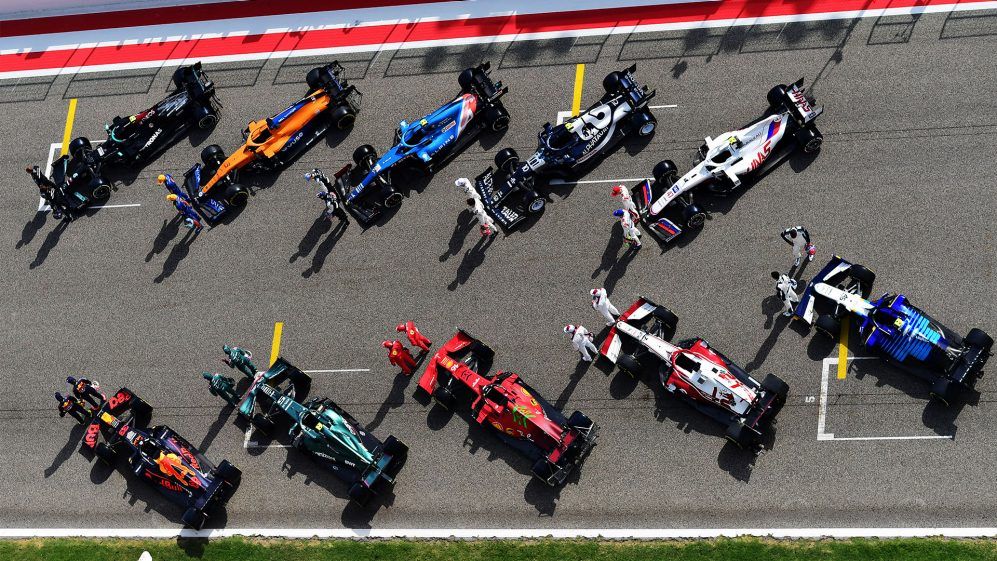 With the 2021 F1 season done and dusted, FormulaRapida.net decided to draw out a ranking system in a new ‘Tier’ system, moving away from a traditional, individual ranked order.

The long 2021 F1 season had its share of strong performances from everyone on the grid, whether at the front of the field or at the back. For this reason, we decided to do away with the traditional system of an individual, ranked system of categorisation.

We – Darshan Chokhani (DC), Ollie Pattas (OP) and Neil Farell (NF) – decided on the Tier system where we have eight F1 teams divided in four tiers, with the remaining two’s performances noted separately.

Here’s how the line-up stacked up:

As we saw with the drivers’ list, the Tier 1 for the 2021 F1 season solely belonged to the Top 2 teams who went toe-to-toe against each other for all season long. It almost came down to the last race but for the retirement for Sergio Perez in Saudi Arabia which pretty much sealed the constructors’ championship in favour of Mercedes. It was their eighth on the bounce – still to be beaten in the hybrid era. They didn’t celebrate it outright in Abu Dhabi due to the disappointment for the way they lost the drivers’ title.

But the constructors’ win was deserving after the way they fought from a low-key pre-season testing and how they fought back despite the regulation changes which did hurt them. There were some reliability concerns on the engine side but seemingly they had it under control by the end of the year to push through. The raw power and pace did come handy and despite the attempts from Red Bull, it wasn’t to be. The team recorded 28 podiums which included nine wins, with eight poles and nine fastest laps.

It was so close but yet so far as Red Bull-Honda lost the constructors’ title to Mercedes by 28 points as the retirement for Perez in Saudi Arabia pretty much sealed its fate by Abu Dhabi where the focus turned for Max Verstappen to win the drivers’ championship. Overall, the team did have the car that could have won the title in 2021 – that would have been their first since 2013. Throughout the season, there were some moments where they lost their way it coupled with unfortunate retirements on Verstappen’s side and also for Perez, with the latter also taking some time to settle down in a new car.

Mercedes did gave them chances to fight back or retake the lead, but Red Bull had its own misery to handle at times. The regulation changes did help them in a way as they registered 23 podiums which included 11 wins, with 10 poles and eight fastest laps. Their letdown was mostly the points lost on Perez’s side where a couple were done to aide Verstappen in the races. Overall, Red Bull did give Mercedes a hard time, whether on the track or off it as the two did have some heavy moments in FIA offices.

There was large air of optimism before 2021 surrounding McLaren. Since 2017, the team had only improved, and momentum was on their side. The acquisition of Daniel Ricciardo was a major boost and had everyone in the paddock talking, that given their strong driver lineup with Lando Norris too, could the Woking based outfit gatecrash the RedBull and Mercedes party? The answer was unfortunately no, but they gave it a good go and for the majority of the season sat a comfortable third in the constructors thanks to blistering pace from Norris picking up podiums and plenty of points along the way.

They finally clinched their first win since 2012, it was a long time coming. Ricciardo led home a McLaren 1-2 in Italy as the first and only team to achieve this in 2021. In the later stages on the season however, it borderline imploded, bad luck and Ferrari resurgence saw them emphatically beaten to third in the constructors in the end when they had it under control for so long. Nevertheless 2021 was another improvement for McLaren and a campaign they can be proud of, with five podiums along with a win and a pole.

The 2020 F1 season was Ferrari’s worst campaign for 40 years. So, whatever happened in 2021, they had to improve, F1’s most prestigious team does not belong in sixth in the standings. And sure enough they did improve, probably more than they and most expected. They were never going to challenge for the title, you can’t improve that much with such little change in the cars over the winter but they did a great job. For the majority of the season they sat in a comfortable and competitive fourth which I’m sure they would have taken at the start of the year but the fact they ended the season so strongly after the power unit upgrade to ultimately crush McLaren to third, is an ominous state of intent for 2022.

The highlight for sure will be the few pole positions that Charles Leclerc picked up in Monaco and Baku as well as Leclerc’s brush with victory in Silverstone. New boy Carlos Sainz did a fantastic job to help Ferrari on their way but he’ll have to iron out his mistakes if the team are going to challenge for silverware next season. All this while focusing mostly on 2022, a great year from Ferrari. All in all, they took five podiums and their five non-scoring races to McLaren’s 10, more or less sealed the deal in their favour.

Having lost Daniel Ricciardo from 2020 to 2021 F1 season, Alpine gained the experience of Fernando Alonso alongside growing Esteban Ocon. The Spaniard did have a slow start but once in form, he was unstoppable as he was consistently in points. His mega defense in Hungary aided the Frenchman and the team to register a fine victory, while the two-time world champion got his podium chance in Qatar. The duo complimented each other well to leapfrog AlphaTauri in the standings. It was the consistent run of points from both the drivers which helped them to beat them. The results for the team came at a time when their performance dipped as they held back their new engine for 2022 and didn’t bring much development on their 2021 car either, making the most of their current machine.

The team actually were in the league of McLaren and Ferrari for pretty much whole of the 2021 F1 season especially on the side of Pierre Gasly. The Frenchman was consistent all-through the year and scored pretty much at all events which included a podium in Baku. He was a consistent Top 6 runner but with Yuki Tsunoda struggling to match him, it held the team back a bit which is why they lost out to Alpine. The Japanese did get some decent points, but it was not consistent enough as the step from F2 turned out to be harder than expected where coaching from Alexander Albon was also required. Operationally, the also had some off moments which hurt their chances whereas Alpine were pretty spot on all-through the season. The team didn’t achieve Top 5 which they wanted but they registered their best points haul since their entry as Toro Rosso.

Aston Martin endured a mixed season of F1 in 2021. The relatively experienced Lance Stroll was paired with the vastly experienced and very successful Sebastian Vettel. Their season started somewhat rather slowly although Stroll scored points in some of the early Grands Prix while Vettel  struggled to adjust to the car. During the season they had three double points finishes and the highlight was undoubtedly Vettel finishing second at Baku, he was of course unluckily disqualified at Hungary. He outscored Stroll 43 points to 34 although Stroll had more points scoring finishes, 9 to 7. They were Significantly ahead of Williams but also notably behind Alpine as they took seventh in the constructors’ championship. It was quite the fall from 2020 but the regulation changes hurt them the most in the tight midfield, where the 2022 focus hampered the progress they would have hoped for.

With the kind of 2021 F1 season they had, Williams were good enough to be in Tier 3 as they undertook their best season for a number of years. After a slow and sluggish enough start they began to make slow progress, particularly in qualifying where George Russell narrowly missed getting into Q3 at the Styrian GP but did so a week later in its Austrian guise and lost out on a championship point at the very end of the race. The team were steadily improving and they scored a double points finish at the Hungaroring and of course Russell took second in the (so called) Belgian GP with Nicholas Latifi also scoring which helped the team achieve eighth in the constructors’ title race. After the Russian Grand Prix, their season slowed up a little, disappointingly perhaps but it was pleasing to see their overall improvement. They eventually did beat Alfa Romeo, who had a better and a fairly quicker car than the British outfit.

Alfa Romeo are one team that should not be proud of 2021. There seemed to be an optimism prior to Bahrain but they picked up in 2021 where they left off in 2020, as backmarkers. A shame for such a pretty car. It did Kimi Raikkonen’s last season in F1 no justice but in their defence as with everyone, development into 2021 was limited. Nonetheless bizarre strategy calls cost the team a lot of points especially with Antonio Giovanazzi and the Italian outfit dropped from eighth in 2020 to ninth this year as Williams overtook them, having done a better job. 2022 will be a new dawn for the team with an all new driver lineup and hopefully for them, an all new set of results.

With no development planned for 2021 F1 season, using pretty much the same chassis as 2020 and having two rookies – not much was anyhow expected from Haas this year. It was a lot about Mick Schumacher and Nikita Mazepin learning the tricks of the sport. While the German did sprung in some decent performances, the Russian did have to endure low moments in the first half and got a bit better in the second half with a new chassis. Both of them had heavy moments in crashes which increased the bills and left them slightly off by Abu Dhabi, but on the whole couple of Q2 runs and fairly decent with reliability, the team got through the year with smiles especially with their behind the scenes work for 2022.