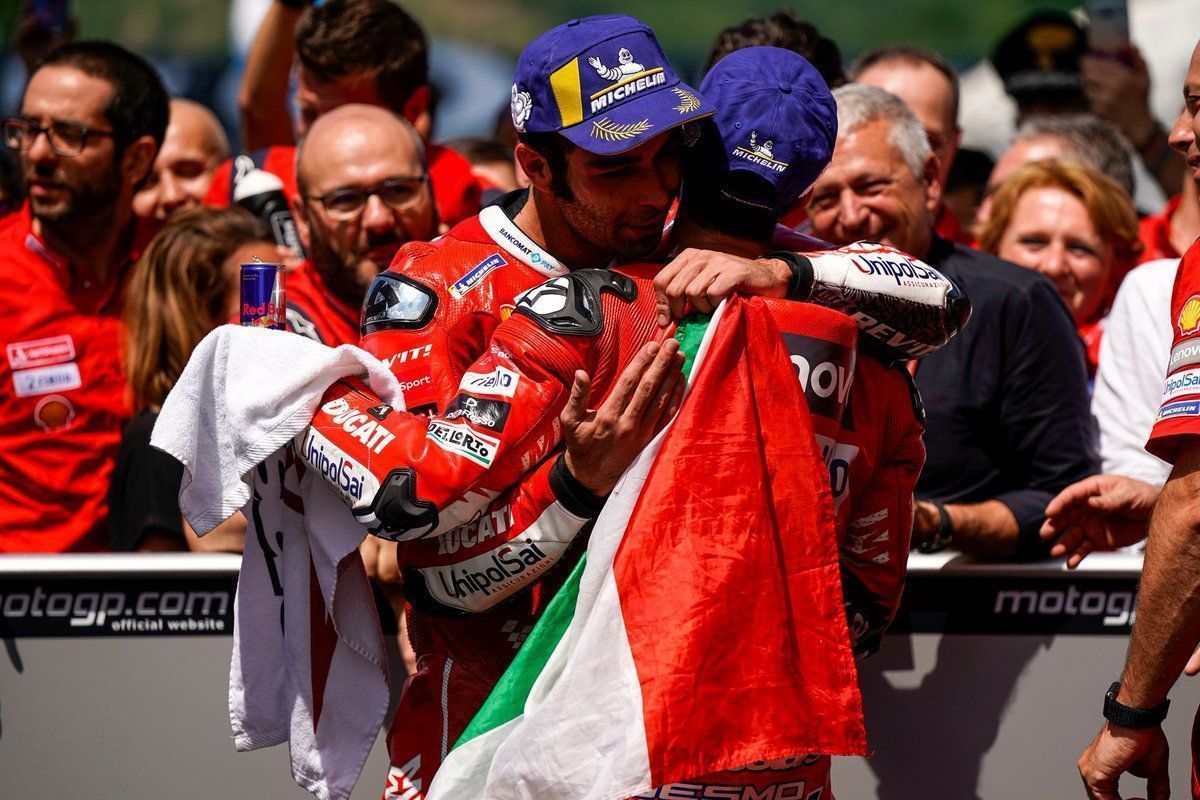 An emotional Danilo Petrucci had good words for Ducati’s teammate Andrea Dovizioso as he dedicated his first MotoGP win in Italian GP to him.

An under-weather Petrucci headed into his home Italian GP at Mugello under pressure as contract talks over-shadowed the weekend, with Ducati set to confirm its line-up for the 2020 MotoGP season around the Spanish GP at Barcelona.

Petrucci was awarded a one-year contract with factory Ducati and is in direct competition with Pramac Ducati’s Jack Miller for a seat alongside Dovizioso. His chances though gets boosted after a podium and now a win, whereas Miller crashed out from the race.

The Italian saw-through an epic duel which involved Miller, Dovizioso, Honda’s Marc Marquez and Suzuki’s Alex Rins as the five riders went back and forth for the lead throughout the grand prix. Towards the end, it came down to only three.

Petrucci led Dovizioso and Marquez in the end laps but the Spaniard sprung into the lead as he started the final lap but he ran wide along with Dovizioso when they touched. A small gap on the inside at Turn 1 was enough for Petrucci to sneak through.

It was then for the Italian to complete the lap and score his first premier class win by just the 0.043s from Marquez with Dovizioso in third. Joy filled the Ducati camp as Petrucci’s emotions ran high, even in the press conference where he was all soaked up.

While apologising Dovizioso for overtaking and costing him some championship points, Petrucci also dedicated the win to his teammate. He revealed the kind of relationship they have had since winter and how he has helped him to overcome misfortunes.

“It’s really great, I still haven’t realised that I won my first race here,” said Petrucci. “I woke up in a good condition but it felt very, very hot. During the past days in practice, after four of five laps I started to feel very, very tired.

“But as the race started, there were a lot of people trying to stay in the front, which I did as well but kept out of any risk. And after few laps, I was able to take the lead. I tried to save my energy and the tyres for the final five laps.

“I had a feeling that someone will try to pass me on the final lap. I braked hard and I knew that Marc and Andrea will try to pass me in the first corner using the slipstream. When I saw Marc and Dovi pass me, I thought ‘no, another time, leading all the race and I will finish third, maybe fourth’.

“But I put fourth gear, fifth gear, I wait for Marc and Dovi, and then I put the sixth, and in that moment I crossed the finish line. I really want to dedicate this victory to Andrea, who adopt me like a child, well brother – a very, very big child.

“But this was unbelievable for a new teammate. We have two different targets this year. I’m so sorry that he lost some points, but I wanted to win the race. Now we need to reach the target of Andrea and I will do everything to get this target of him.

“I’m so sorry for sure, I think both Marc and Andrea could have won here, but racing is always on the limit and this time was my time. I think I had a big opportunity. Next time I will think about the championship. I’m really happy for sure.”

Petrucci further revealed the mindset he was in years back and also at the start of the season which resulted in slower pace, but it was Dovizioso who guided him to remain calm and enjoy the moment and leave the rest at fate.

“I thought many times in the past to quit my career because I said ‘this [MotoGP] is not my world’,” he said. “Also, at the beginning of this year, because I have no contract for next season I put pressure on myself and the first three races were not so good.

“Once again it was Andrea that helped me, telling me not to think about the future. Think about now. Try to enjoy what you are doing. Focus on your strong points, work hard. From Jerez, I just think, ‘I will do my best. If it’s enough, okay.

“If not, and if I cannot win with this bike, then I’m not able to win with any other bike, so [MotoGP] is not my world’. But I won, so maybe I will change my mind about the future!” Petrucci now is fourth with 82 points with Dovizioso and Marquez 12 apart.

Dovizioso was disappointed to miss out on the win but was equally happy for Petrucci. “Danilo was fast, he was able to stay at the front and do the same lap times as me and Marc,” he said. “I didn’t put myself in a bad position.

“I was managing the tyre, I didn’t push too hard and I did the right overtakes in the right moment. But, unfortunately, Turn 1 happened. I had to pick up the bike very quick and that’s the reason I also lost a position to Marc, so that is the negative part of the race.

“I’m so disappointed to lose the points here, but I decide to work with Danilo because I saw some potential. He had to change just a few things and he’s done it, that’s why he won today. He needed that result for the future, so I’m happy for him.

“We have to be really happy with the race we put together because the conditions were really difficult. The reason why Marc was able to stay with us at our good track is the speed in the middle of the corner. We accelerate better, we brake better but in the middle of corner we are too slow.”