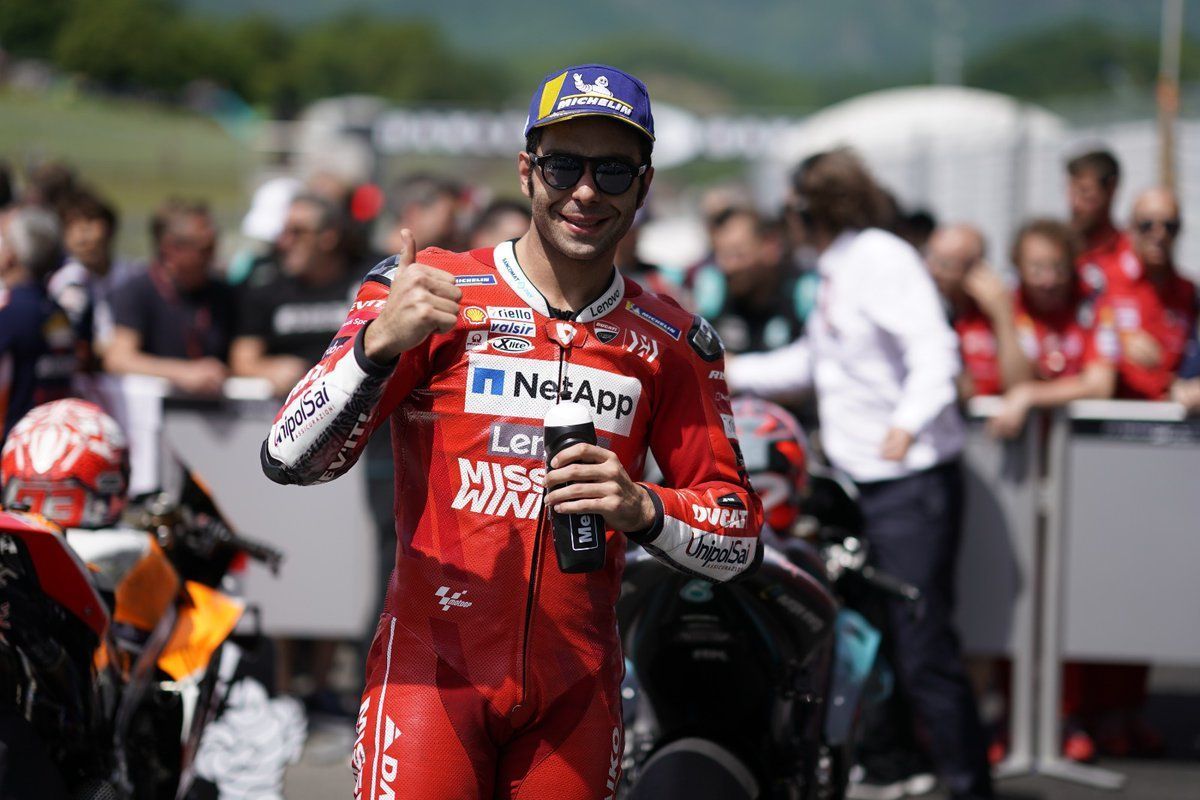 Pole-sitter and Honda’s Marc Marquez led the way to start the Italian MotoGP race at Mugello as LCR Honda’s Cal Crutchlow slotted into second with Ducati’s Andrea Dovizioso shooting into third from ninth ahead of Danilo Petrucci.

By the end of the lap, Marquez had Dovizioso behind him with Pramac Ducati’s Jack Miller getting up to third from Petrucci while Suzuki’s Alex Rins climbed up to seventh in the lead group. At the same time, it was disaster for the Yamaha riders.

The fight at the front got intensified as the lead started to change lap after lap like a Moto3 race with Marquez, Dovizioso, Petrucci and Rins all having their chance at the top spot, while Miller added his bit in the podium fight – to make Ducati 1-2-3 at one point.

Even though Crutchlow lost touch with the leading group, he had the fight with Pramac Ducati’s Francesco Bagnaia and LCR Honda’s Takaaki Nakagami with Petronas Yamaha’s Quartararo and Vinales behind them after crashes for Franco Morbidelli and Rossi.

The senior Italian’s home grand prix ended in a disaster as there was more trouble for the VR46-backed riders as Bagnaia crashed out as well after Morbidelli. For Pramac as well, it ended early after Miller crashed out too from fifth, especially after setting the fastest lap.

At the front though, Petrucci found his way through to lead from Marquez with Dovizioso in third ahead of Rins after Miller’s crash. The second group had Nakagami in the lead in fifth ahead of a recovering Vinales, who passed both Quartararo and Crutchlow.

The Top 10 had Ducati wildcard Michele Pirro in ninth from KTM’s Pol Esparagaro with Honda’s Jorge Lorenzo in 11th ahead of Aprilia’s Aleix Espargaro. The last few laps was all about the four riders at the front with rivalry hot between the Ducati duo.

It was close in the final few corners but Petrucci held on eventually to beat Marquez by 0.043s to score his first MotoGP win at his home Italian GP at Mugello – his first win since 2011 Superstock 1000 Cup – with Dovizioso completing the podium and Rins taking fourth.

It was a best result for Nakagami too in fifth with the Japanese eking out his first Top 5 performance on a year old Honda. He managed to fend off a recovering Vinales, who was sixth ahead of Pirro after the Italian also cleared Crutchlow.

The British rider dropped to eighth with Espargaro taking ninth in the end from Quartararo as Aprilia’s Espargaro cleared Lorenzo to take 11th with Mir also sneaking through to drop the Honda rider to 13th eventually, in another disappointing result.

After his teammate Tito Rabat’s troubles, who eventually retired, Avintia Ducati’s Karel Abraham scored his first points in 2019 MotoGP season in 14th as Aprilia’s Andrea Iannonen fought through himself to take the final point in 15th.

The 17 race finishers saw Tech 3 KTM’s Miguel Oliveira in 16th from factory KTM of Johann Zarco after Oliveira’s teammate Hafizh Syahrin retired due to a mechanical issue. The Malaysian joined Rossi, Morbidelli, Rabat, Miller and Bagnaia in the DNF list.