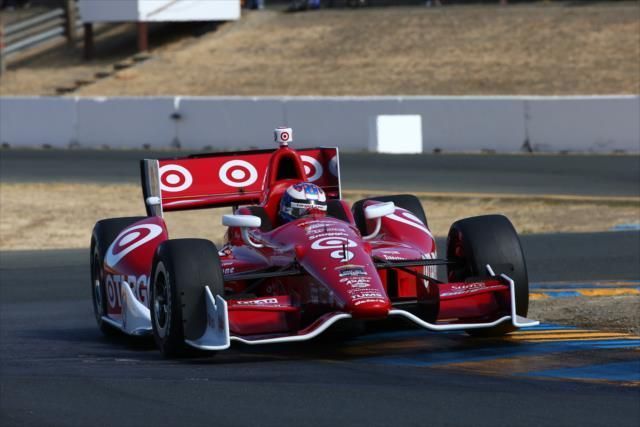 Share
Facebook
Twitter
WhatsApp
Linkedin
ReddIt
Telegram
Scott Dixon has achieved his second victory of the season in Sonoma circuit. The New Zealander has led only the last 3 laps of an absolutely crazy race with Hunter-Reay in the second place and Pagenaud third after beating Conway who ran out of gas before crossing the finish line.
This morning the drivers have been violently awakened by the earthquake of 6.0 that has been in the area of California. A very strong earthquake that had its epicenter near the Sonoma circuit which fortunately, has not been affected either on site or on the track.
The penultimate Grand Prix of the season began with Will Power from Pole Postion, joined on the front row by Newgarden. Power quickly kept the top spot but there was an accident on the hill climb that affected the championship runner, Hélio Castroneves, damaging his front wing on an impact with Hinchcliffe, Briscoe spun due to a touch by Bourdais, suffering off the track, this caused the first caution of the race. Castroneves, Briscoe, Montoya, Wilson, Hinchcliffe and Sato took the opportunity to stop a box to repair the damage to the cars.
Power was leading the race followed by Newgarden, Dixon, Hunter-Reay (started thirteenth) and Kanaan in fifth.
The race began again on lap 4, Kanaan took advantage to beat Hunter-Reay on the outside in Turn 2 and stood in fourth place. Castroneves 5 ??laps later stopped to remove a piece of his car that was damaged and did not allow him to improve positions, so he stood as the last in the race, far from Power who was still leading the race with a 5 second advantage over Newgarden, distance that would increase with each passing lap.
Pagenaud was the first stop on lap 14 and two laps later did Hunter-Reay, Kimball, Andretti, Conway and Briscoe. Power and Dixon and Kanaan did the same leaving the race lead for Newgarden who also stopped immediately. Muñoz and Montoya also took the lead and then stopped. This meant that after the first stop by all drivers, Power was leading the race followed by Dixon, Newgarden (rolling on the hard tyres), Rahal (with different strategy) and Hunter-Reay. Castroneves was making the fourth stop on lap 22 of the race.
On lap 29 the second “Caution” of the race appeared and the first drop, Huertas had to park his car after suffering mechanical problems. This kind of hurt Power who had a distance of more than 10 seconds with Dixon. The pit stop two laps later were open again with Rahal, Kanaan, Sato and Conway. Silently, the third in the championship, Simon Pagenaud had already traced to ninth place while Castroneves was sixteenth. After 6 laps under a yellow flag, the green flag came again on lap 35.
Hunter-Reay got to overtake Newgarden and went up to third place, but Castroneves in the attempt to advance Bourdais and Saavedra made the latter car stop, causing another caution that surprised Wilson and Pagenaud who were already entering in the pit lane. Once the pit lane opened, all drivers entered except Kanaan, Conway, Briscoe, Rahal, Sato and Bourdais which stood at the top of the standings. The pit lane was between tyre changes of each drivers and Dixon managed to beat Power in pit lane exit.
After all the last stops on lap 64, Conway was leading the race but managed to overtake the British Rahal at Turn 7 and took the lead, Kanaan was third followed by his teammate at Target Chip Ganassi, Scott Dixon; Hunter-Reay was fifth and sixth Pagenaud getting many points from Power who was 15.
Tony Kanaan with the absence of 12 laps had to pit stop for a fourth time that made him lose his podium position in favor of Dixon. Opposite Rahal had gotten away with Conway, lost all this, plus Dixon and Hunter-Reay also entered to the fight for victory. The American with the car No.15 masterfully managed to handle the tyres, ensuring victory. Instead the fight for second place between Conway, Dixon and Hunter-Reay was not very clear. However with 3 laps to go he went into boxes and Dixon took advantage to beat Conway who was suffering a lot with the tyres and on the same lap will also bring forward Hunter-Reay.
On the last lap, Andretti surpassed Wilson for eighth place, also Power ahead at the final corner coming together with Bourdais both drivers in parallel. But the stroke was Mike Conway losing the podium after running out of fuel, finishing the race in fourteenth place. You have to say that the maneuver Power seemed to have done under caution, a move that is under investigation this afternoon.
Results: