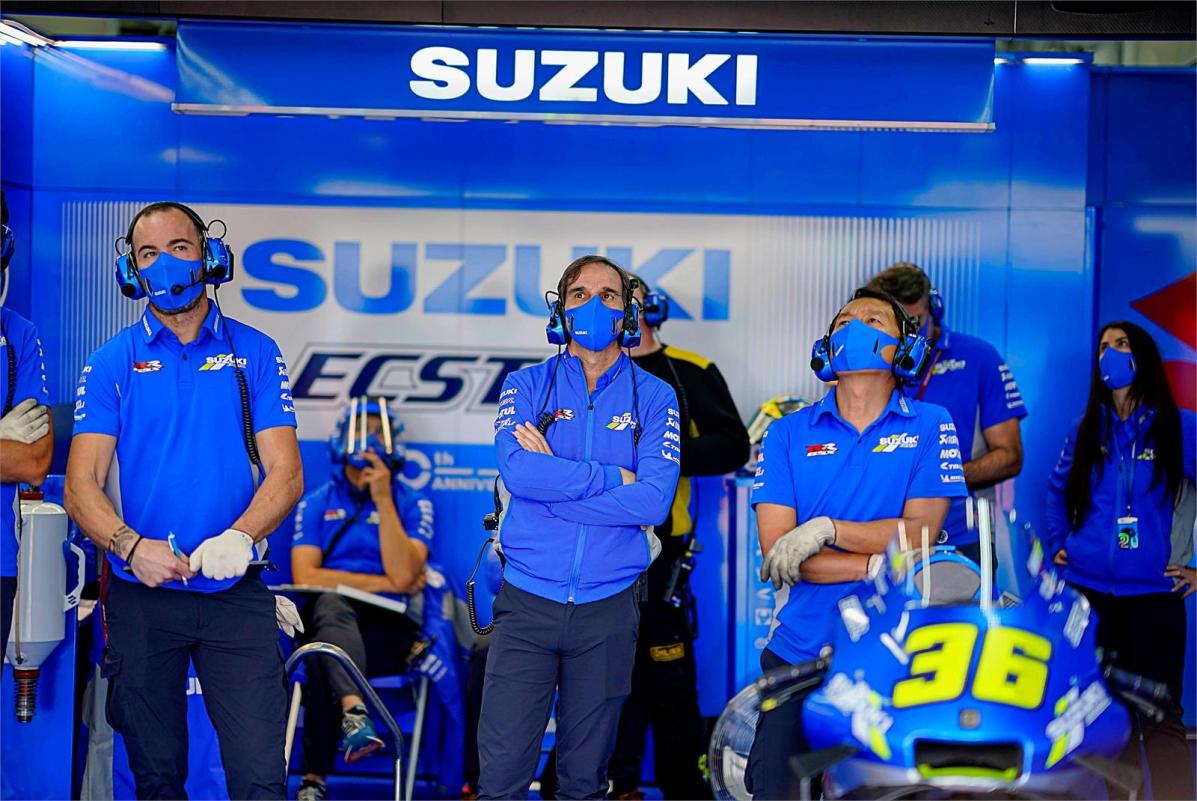 Davide Brivio has spilled the beans on how Suzuki contacted him at the start of the project, as then revealed how he came into contact with nine MotoGP riders.

The outgoing MotoGP team boss, Brivio, revealed that Suzuki connected with him over Facebook back in 2013 to enquire about Valentino Rossi’s plans and if will be interested to ride the Japanese manufacturer’s bike, for their planned move to the series in 2014.

With Rossi saying no, Suzuki turned towards Brivio for a team role, which he accepted. They started with the test programme with Randy de Puniet but the Japanese manufacturer decided to defer their planned return to 2015 with Aleix Espargaro and Maverick Vinales.

“I worked for Valentino Rossi, he had left Yamaha and I was working for him on his personal things, his contracts, etc,” Brivio said in a video interview to MotoGP. “Sahara reached out to me via Facebook. It’s weird because I don’t use Facebook. I have a Facebook profile, but I don’t use it.

“I don’t know how to use it even now. But I started looking at the messages that came in, I saw Sahara’s name and he wanted to know what Valentino Rossi’s intentions were for the future. He told me that they [Suzuki] wanted to return to MotoGP in 2014 and he asked if Valentino Rossi would be available to race for the team.

“I spoke with Valentino, but he said riding for Suzuki didn’t interest him. Valentino wanted to go back to Yamaha. And so I graciously replied to Sahara to let him know that Valentino was not interested. And then we started to talk a bit and Sahara asked me in the case he started a team in Italy, would I be interested?

“And I said yes that I might be interested. So, I started with them on 1 April 2013,” summed up Brivio, as he then switched to how Suzuki then went ahead with their rider selection, where they wanted to have youngsters and work with them for longterm.

As mentioned above, they opted for Espargaro and youngster Vinales for their first MotoGP season, which worked well for them. They did have an option to take in Andrea Dovizioso but the Italian decided to stick with Ducati than switch to Suzuki.

“We chose Aleix Espargaro because he was already an expert ride, fast, and could help with the set-up of the bike,” said Brivio. “For Maverick Vinales, I went to Qatar and saw his first Moto2 race. I noticed that in the last 10-12 laps he was the fastest. And then in the second race, in Austin, he won. And with that we recognised he was someone special.

“We also tried to get Dovizioso [for 2015] but at the last minute he decided to say with Ducati,” summed up Brivio. The duo did well in 2016 where Vinales got a win and podiums for Suzuki but the Spaniard decided to switch to Yamaha instead for 2017.

Suzuki decided to keep experience and youth pairing for 2017 MotoGP season as Brivio stated that they sacrificed Espargaro for Andrea Iannone. As for the second seat, they took in Alex Rins over Johann Zarco, who went to Tech 3 Yamaha and outshone the Spaniard.

At that moment, they felt the heat but Brivio was looking at longterm. “Vinales left Suzuki to go to Yamaha,” he said. “We decided to sign Andrea Iannone as we thought it would be good to repeat the Vinales project. But we did not have an engine that Iannone could get the most out of. In 2018, with a better engine, Iannone and Rins got nine podiums between them and it was a good season.

“Actually, looking back, we agreed a contract with Zarco while he was racing in Moto2. So during his last season in Moto2 he was under a Suzuki contract. We had to choose between Zarco and Rins, who was also emerging as a talent. It was a very difficult choice but in the end we settled on Rins. This caused a lot of criticism during 2017 because Zarco went to Yamaha with Tech3 and was very strong.

“He was getting podiums while Rins, who was unlucky [with injuries], was in trouble. The results in 2017 were very disappointing [but in 2018] the Rins project was working well, the talented young man was growing,” summed up Brivio, when he then switched to the current time of taking Joan Mir in the team, where they even though of Jorge Lorenzo.

“The idea of trying another young man like Rins was conceived,” said Brivio. “Vinales, Rins, let’s try another we thought. We began to think of Joan Mir, because winning the Moto3 championship with ten victories caught my attention. During that time we also had the option to sign Jorge Lorenzo. So in the end we had to chose between Lorenzo and Mir. But it was not a choice between two riders, but not a choice in philosophy and the direction we wanted to take, going with a veteran rider like Lorenzo, or developing a young talent.

“The more we got to know about Joan, the more he seemed like someone special. He liked Suzuki but his manager told me there was a problem because he had an option with Honda. So then I asked him directly, ‘Are you interested in Suzuki regardless of the Honda option? If you had to choose between Suzuki and Honda where would you go?’

“And he told me: ‘I want to go to Suzuki, because for me the Suzuki is a motorcycle that adapts to my style’. And when he told me that, my eyes lit up and I thought, ‘he’s the right man,” summed up Brivio.