The FIM and Dorna cancelled MotoGP’s British Grand Prix after hours of waiting due to persistent rain falling at Silverstone.

The British MotoGP race along with Moto2 and Moto3 races were already pre-poned on Saturday as the forecast for the day was rain all day long at Silverstone. The Warm-Ups for all the three categories was completed with much trouble.

However, the rain started to fall after that and continued on until late in the day which eventually forced them to take the decision to cancel MotoGP, Moto2 and Moto3 races after a mutual consent between IRTA Officials, FIM, Dorna, the teams and the riders.

The scheduled time for the race to take place was at 11:30 local time with Ducati’s Jorge Lorenzo to start on pole from Andre Dovizioso and Tech 3 Yamaha’s Johann Zarco. But the race never got going with the wait on for the improvement of track conditions.

After 14:00 local time, the race direction confirmed that the race cannot take place on Monday as some teams and riders did not agree especially Yamaha who are scheduled to test in Aragon later this week.
There were several delays then as the rain continued to fall which eventually forced them into the decision. The officials lamented the condition of the circuit which made it impossible for the water to drain quick enough for the race to start. 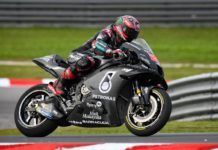 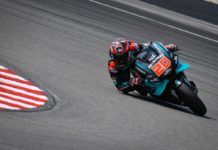