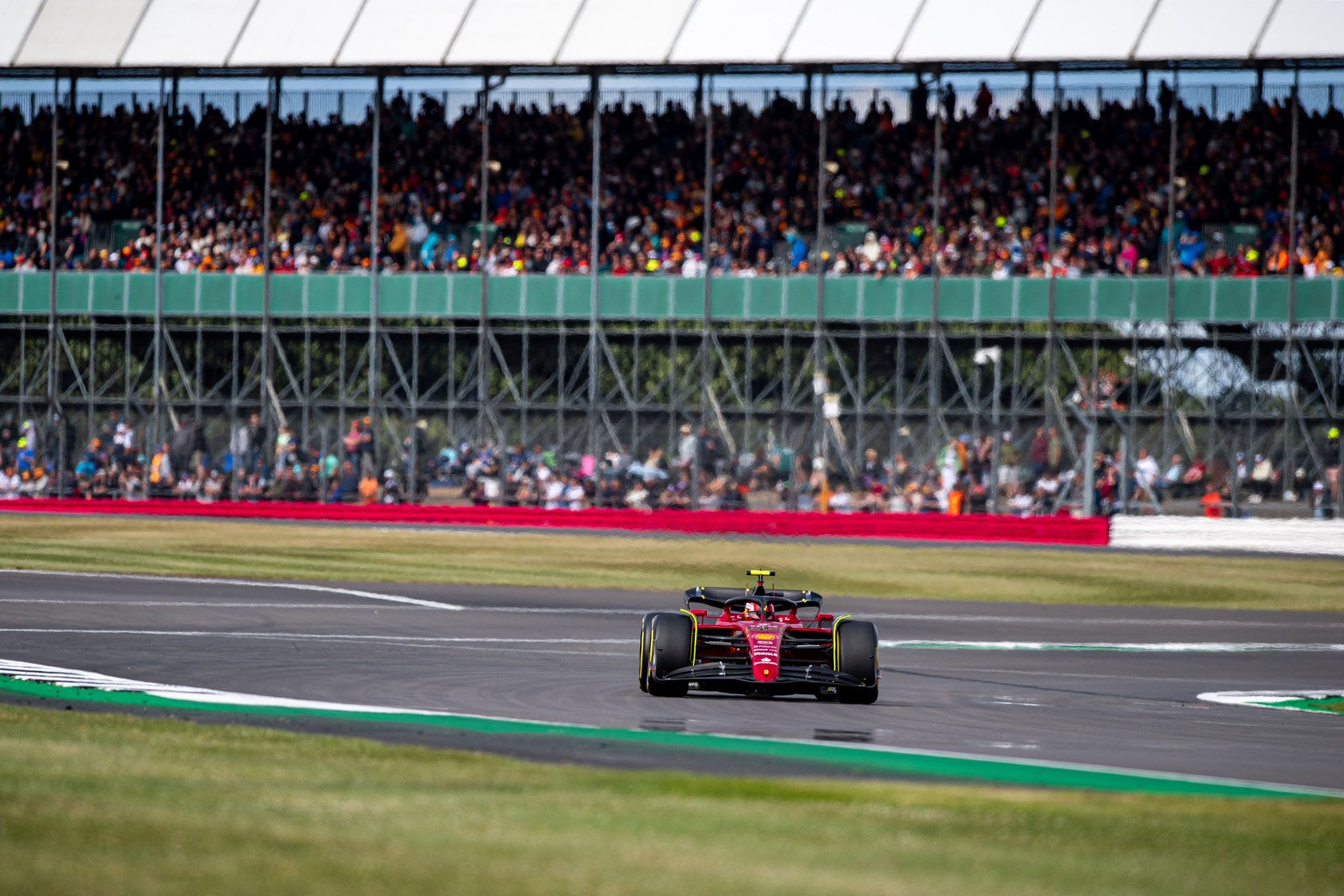 It was dry weather to start the F1 British GP at Silverstone which was red-flagged after a major incident involving multiple cars. At the front, Red Bull’s Max Verstappen took the lead on the soft compound from Ferrari’s Carlos Sainz who was on the mediums.

Mercedes’ Lewis Hamilton jumped Ferrari’s Charles Leclerc for third, with Alpine’s Fernando Alonso jumping Red Bull’s Sergio Perez and McLaren’s Lando Norris to be fifth. The Mexican had anti-stall which affected his start and he dropped a position.

Williams’ Nicholas Latifi – also on the soft tyres – was eighth from Alfa Romeo’s Valtteri Bottas and McLaren’s Daniel Ricciardo in the Top 10. There were little replays of the start after information came through of Alfa Romeo’s Zhou Guanyu went upside down.

Guanyu was confirmed to be fine during the extraction with the car seemingly stuck in the barriers. After he was sent to the medical center, F1 showed replays which showed how the incident took place where AlphaTauri’s Pierre Gasly touched wheels with Russell.

The Brit moved slightly to the left and touched wheels with Gasly which resulted in Russell swerving to make contact with Guanyu who flipped over from Turn 1 onto the gravel as his car jumped over the barrier onto the catch fence before coming to a halt.

It took some time to get Guanyu out and also the car out. While this was happening, a slow start from AlphaTauri’s Yuki Tsunoda allowed Alpine’s Esteban Ocon to jump him. At the same time, Aston Martin’s Lance Stroll rammed onto Williams’ Alexander Albon.

The Thai racer went onto the wall and then hit both Tsunoda and Ocon in the process. The cars of the latter two made it into the pitlane as mechanics were able to fix it. For Russell and Albon, despite the car being brought back, there was little chance of a start.

While all this was happening, the news came through of certain number of protesters jumping over the fence at around Turn 7 to make it onto the track. The police warned of such action ahead of the weekend but fortunately the red flag came for the crash.

Despite the order changing in that brief running, the FIA decided to re-start the F1 British GP as per the original order with Sainz leading Verstappen, Leclerc, Perez, Hamilton, Norris, Alonso, Latifi, Gasly and Bottas in the Top 10.

It was a strong re-start from Sainz while on the same tyre as Verstappen. The Spaniard just did not allow the Dutchman to pass which brought Perez and Leclerc into the action. The two touched into the left-hander, which slightly damaged the Mexican’s car.

Leclerc then had a small contact with Verstappen which the stewards noted but stated no further action. Perez was fourth from Norris with Hamilton behind him in fifth, Gasly up to seventh from Alonso, Tsunoda and Ocon in the Top 10 points position.

Replays showed the close fight between Leclerc and Perez along with Leclerc and Verstappen, which did hurt Hamilton when Norris got through. The McLaren driver eventually lost fifth to the Mercedes driver which became fourth.

Perez was forced to pit to change the damaged front wing as Norris was fifth from Alonso who cleared Gasly. Tsunoda was eighth from Ocon with Latifi in the Top 10. Before the race started to settle, a wide moment from Sainz allowed Verstappen to lead F1 British GP.

And no sooner, Leclerc started to hustle Sainz for second. But it didn’t matter as a seemingly slow puncture forced Verstappen to stop. Despite pitting, the Dutchman still complained of a problem which the team stated that it was not critical.

It was a performance drop on the rear which he may have done by running over the kerb. He dropped to sixth as Hamilton was up to third. He set his charge against Sainz and Leclerc, who were not blazing the track due to damage to the Monegasque.

Norris steadied himself in fourth from Alonso and Verstappen, with Ocon in seventh from Latifi, Bottas and Ricciardo in the Top 10. Amid all this chaos, there was an odd moment between the two AlphaTauri drivers going into Turn 1.

Tsunoda in the inside tried a move but both he and Gasly slid onto the run-off in the same manner to drop outside of the Top 10. The Japanese was handed 5s time penalty for forcing another driver off the track as it ruined both their races.

With Sainz and Leclerc pitting around the pit stop time, Hamilton took the lead of F1 British GP with the Brit in the mix of the race win. He extended his stint, with Norris in fourth from Alonso, Perez and Aston Martin’s Sebastian Vettel in the Top 7.

Verstappen who pitted for the hard compound lost to Vettel and was struggling for grip as Ocon passed Latifi for ninth. The Canadian had Haas pair of Mick Schumacher & Kevin Magnussen on his tail in the fight for the final point in the Top 10.

It was a bad day for Alfa Romeo where Bottas was forced to retire, while Gasly’s damage saw him retire from the F1 British GP too. Ferrari, meanwhile, allowed its drivers to fight but not for long as Leclerc eventually was allowed to pass Sainz for track position.

After Hamilton pitted, Leclerc led F1 British GP from Sainz, with the Brit in third. Perez was fourth after his early stop as Norris was fifth from Alonso and Vettel. Behind him, Verstappen had to fend off from Ocon, who caught him up well.

In fact, Ocon passed Verstappen for eighth as Schumacher started his chase after he cleared Latifi. The Dutchman fought back but the Frenchman had troubles to come to a halt which brought out the full safety car and whole lot of soft tyres.

Leclerc missed the cue to remain on the hard tyres, with Sainz and Hamilton behind him on the soft tyres. Perez got a free stop to be fourth as Alonso was fifth after a late stop Norris which dropped him to sixth as Vettel stayed seventh after a free stop.

Magnussen was up to eighth from Verstappen and Schumacher in the Top 10. The re-start almost worked well for Leclerc against Sainz but not for long as the Spaniard eventually passed his teammate to lead F1 British GP as Perez passed Hamilton for third.

The Brit was slow off the final corner which allowed him to pass Hamilton. With Sainz far into the distance, Leclerc had Perez and Hamilton on his tail in the. It was feisty battle among them where Hamilton got both of them in the final corner to second.

While Perez and Leclerc tussled, Hamilton made the most but not for long as Perez came back on him at Turn 1 to move to second with Leclerc passing the Brit too. The Mexican stretched out of this leaving Leclerc and Hamilton to fight for third.

The two tussled for couple of laps and went back and forth but Hamilton finally made the move to third as Leclerc then had to fend off from Alonso and Norris. Behind them, Verstappen had to fight Schumacher with a floor damage.

Vettel was ninth from Magnussen in the Top 10. At the front, Sainz got through to score his first-ever F1 win in British GP after a tough 2022 with Perez in second from Hamilton. Leclerc was fourth as he fended off both Alonso and Norris.

Behind them, Verstappen fought until the final corner against Schumacher for eighth to register his first points in F1 as Vettel and Magnussen rounded out the Top 10. Finishing outside of points was Aston Martin’s Lance Stroll in 11th.

He made a late pass on Williams’ Latifi who beat McLaren’s Ricciardo where the Australian suffered from DRS issue, while AlphaTauri’s Tsunoda was 14th. DNF: Ocon, Gasly, Bottas, Russell, Zhou, Albon.

Confirmation of the final placings at Silverstone 🇬🇧#BritishGP #F1 pic.twitter.com/nHFsZKcHUZ