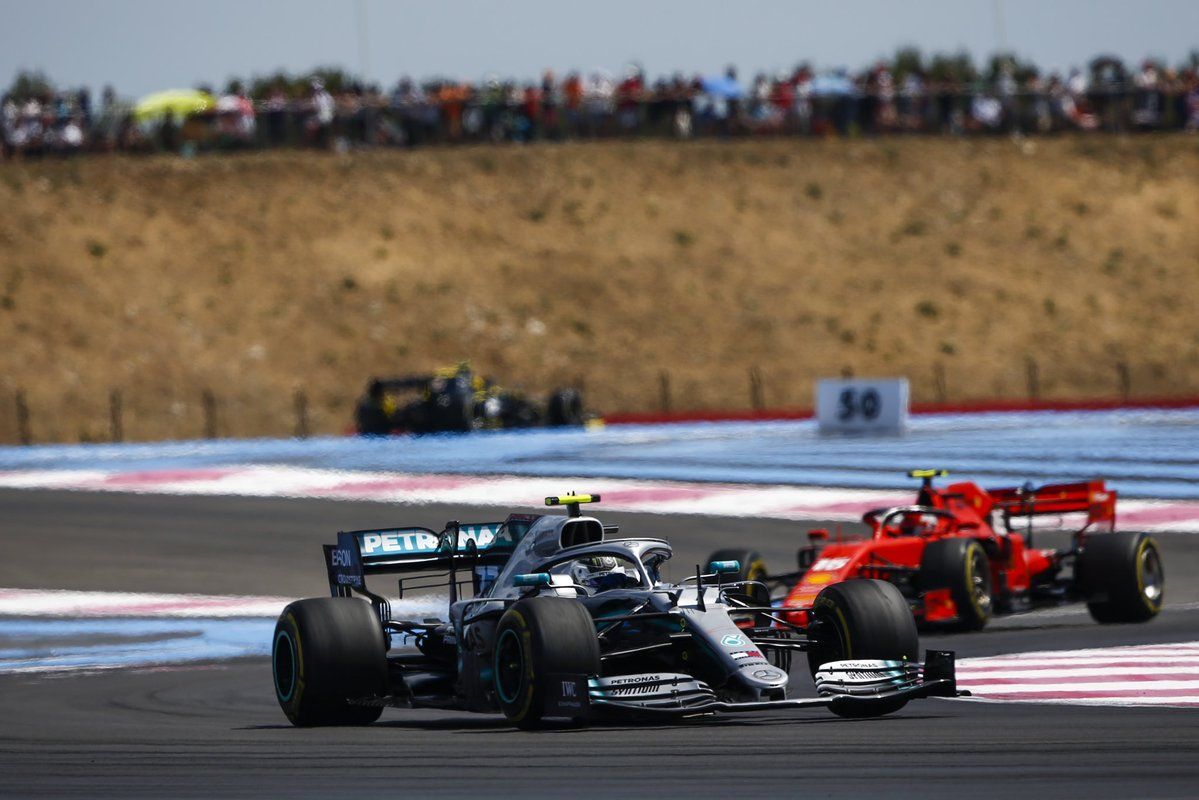 Mercedes’ Valtteri Bottas reveals the issue he had with tyre temparature post-VSC period which allowed Ferrari’s Charles Leclerc to catch up in F1 French GP.

It was an uneventful F1 French GP at Circuit Paul Ricard for Bottas as after losing out to Mercedes teammate and pole-sitter Lewis Hamilton at the start, the Finn was running at his own pace while the British driver started to pull away and create a solid gap.

Bottas, himself, created a decent gap to Leclerc and looked a safe second until the final few laps of the grand prix. A bollard rolled on track when Toro Rosso’s Alexander Albon hit it, which forced the FIA race director to deploy the VSC for a brief period of time.

It was enough to hamper Bottas though as the Finn’s tyres did not come back upto speed quick enough which allowed Leclerc to close in on him and eventually finish just under a second as the Monegasque came dangerously close to taking second away.

“I lost a little bit of time in the VSC but I don’t think I was the only one because it was, like super quick, so first you slow down a lot to be positive on the delta, you’re changing the engine modes, then suddenly it was saying VSC ending,” said Bottas.

“So, put in the right mode. I started to go flat-out because I was a lot positive, so I think I got down to maybe +3 on the delta which is bigger than usual. So, lost a bit of time there – but the main issue was the blistering, a lot of front tyre wear.

“Once you lost a bit of temperature under the VSC, you struggle to get gain it back when you don’t have the surface of the rubber any more there. So, that was the bigger difference, so couldn’t really restart the tyres.

“We were suffering with some front tyres blistering in the last stint, so we were a little bit concerned and just wanted to be on the safe side so we would definitely make it to the end without any failure on the front tyre.

“So had take care a lot of the fronts in many of the corners and maybe being a lot on the conservative side, losing some big chunks of time, just by managing and being on the safe side. And in the end, that’s why it became a bit close with Charles, closer than we wanted.”

Bottas conceded that Hamilton had a better start and also better pace as the gap between the two increased to 36 points now after eight F1 races. Meanwhile, for Leclerc, it was a great opportunity to try and get Bottas, but the Finn had it under control eventually.

The Monegasque earned his second consecutive podium finish as apart from the one DNF, Leclerc is yet to finish outside the Top 5 position with only third and fifth place finishes to his name. Leclerc also talked about a changed approach in the grand prix.

“It’s always quite difficult to know [if one more lap would have done it],” he said. “One thing for sure is that I was catching quite quickly at the end. The car felt pretty good. I had paid quite a lot of attention to both axles of tyres before.

“And I was just focusing on the end of the race, to have the tyres in quite a good shape and I think on that we did quite a good job. To be honest though I did not expect to catch Valtteri. As he mentioned he had some issues with the front tyres.

“That’s why I caught him quite dramatically towards the end. It was a good surprise. And when I saw that I pushed even more. At the end we finished very, very close. I tried to show myself in the inside of the last corner, but obviously I was too far to try something.

“Anyways, I’m very happy because I’ve had a few difficult weekends, the last ones, especially in qualifying. I changed the approach for here. I changed also a little bit my approach on the car set-up and I think it went in the right direction.

“So on that I’m very, very happy that it paid off and we could see it on the result this weekend. Then on the car improvement we have brought some new parts this weekend, some were good, some other were not, but clearly Mercedes are quite better for now.”