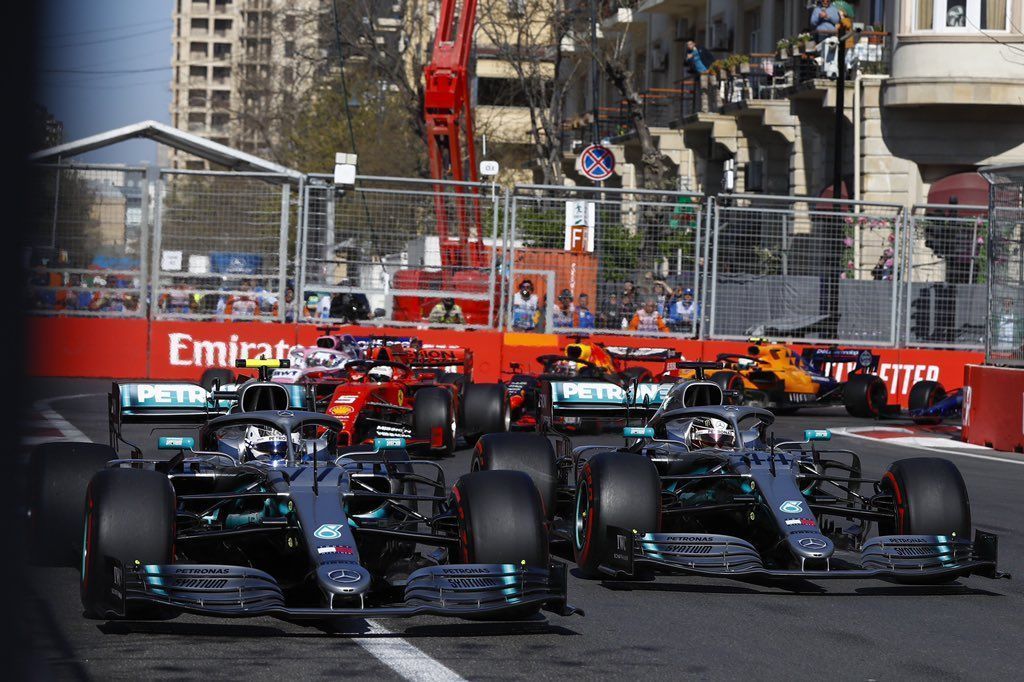 A fourth Mercedes 1-2 in 2019 season as Valtteri Bottas took the win in F1 Azerbaijan GP from Lewis Hamilton and Ferrari’s Sebastian Vettel.

It was a clean start to the F1 Azerbaijan GP at Baku City Circuit with no first lap dramas as pole-sitter and Mercedes’ Valtteri Bottas led the way from Lewis Hamilton after a small wheel-to-wheel fight between the two in the first few corners.

Ferrari’s Sebastian Vettel held on to third but Racing Point’s Sergio Perez went around the outside of Red Bull Racing’s Max Verstappen to take fourth with McLaren Lando Norris also gaining to be sixth from Toro Rosso’s Daniil Kvyat.

McLaren’s Carlos Sainz and Renault’s Daniel Ricciardo were the other gainers to be eighth and ninth with Ferrari’s Charles Leclerc dropping to 10th. Further behind, Toro Rosso’s Alexander Albon brushed with the tyre barrier in Turn 1 but came unscathed.

Meanwhile, Williams’ Robert Kubica was handed a drive-through penalty as the mechanics brought the car too early in the pits for his pitlane start. On track, Leclerc started to claw into the field as he got himself up to fifth after passing Verstappen.

The Dutchman lost to the Monegasque after re-taking track position from Perez. At the same time, his Red Bull teammate Pierre Gasly made his way into the Top 10 after starting from the pitlane. In an interesting move, the pit stop sequence started on Lap 7 itself.

From among the leaders, Vettel started it first on Lap 12 as Bottas and Hamilton followed but the two Mercedes drivers kept track position with Leclerc leading the Azerbaijan GP. The Monegasque went deep in the race as both Mercedes passed him on track.

While the passes were taking place, Kvyat and Ricciardo went straight on in Turn 3. The Australian attempted a move on the Russian on the inside but out-braked himself to go off with the Russian having nowhere to go. In more dramas, Ricciardo reversed into Kvyat.

The two touched with both Ricciardo and Kvyat then retiring in the pits as they were put under investigation by the stewards. With Bottas now leading the Azerbaijan GP, Leclerc finally pitted on Lap 34 but to his unfortunate luck, he came out behind Gasly.

It took him a lap to clear but he managed to eventually as he then set out on the charge for the Top 3 positions. As Leclerc was set off, Gasly stopped on track with a power issue as the Virtual Safety Car deployed to clear the car.

At the same time, Haas’ Romain Grosjean also pitted to retire while few others pitted to change tyres for the final run. The re-start went smoothly as Bottas continued to lead Hamilton, Vettel, Verstappen and Leclerc in the Top 5.

It was close in the end but Bottas managed to hold on the threat from Hamilton to take his second win in the 2019 F1 season with the Finn getting retribution from last year’s Azerbaijan GP loss to register a fourth consecutive Mercedes 1-2 of 2019.

After all the hype early in the weekend, Vettel was only third with Verstappen fourth again from Leclerc, who took the option of registering a fastest lap with a brand new set of a soft compound and did it on the final lap of Azerbaijan GP – setting the lap record as well.

The best of the rest mantle went to Perez eventually despite the threat from both the McLaren drivers where Norris was in front of Sainz but a VSC pit stop put the Spaniard ahead as he finished seventh to register double points for McLaren.

It was double points for Racing Point too as Lance Stroll fought his way from back of the grid to ninth with Alfa Romeo Racing’s Kimi Raikkonen taking the final point after starting from the pitlane – the Finn was the first driver to be lapped though.

Just outside the Top 10 was Albon, who couldn’t secure his third consecutive points finish, with Alfa Romeo Racing’s Antonio Giovinazzi in 13th. Even though Haas’ Kevin Magnussen finished 14th, he was quite way off from Giovinazzi.

Behind him was Renault’s Nico Hulkenberg in 15th with the Williams duo of George Russell and Robert Kubica finishing 16th and 17th respectively – both two laps down on the leader. DNF: Gasly, Grosjean, Kvyat and Ricciardo.