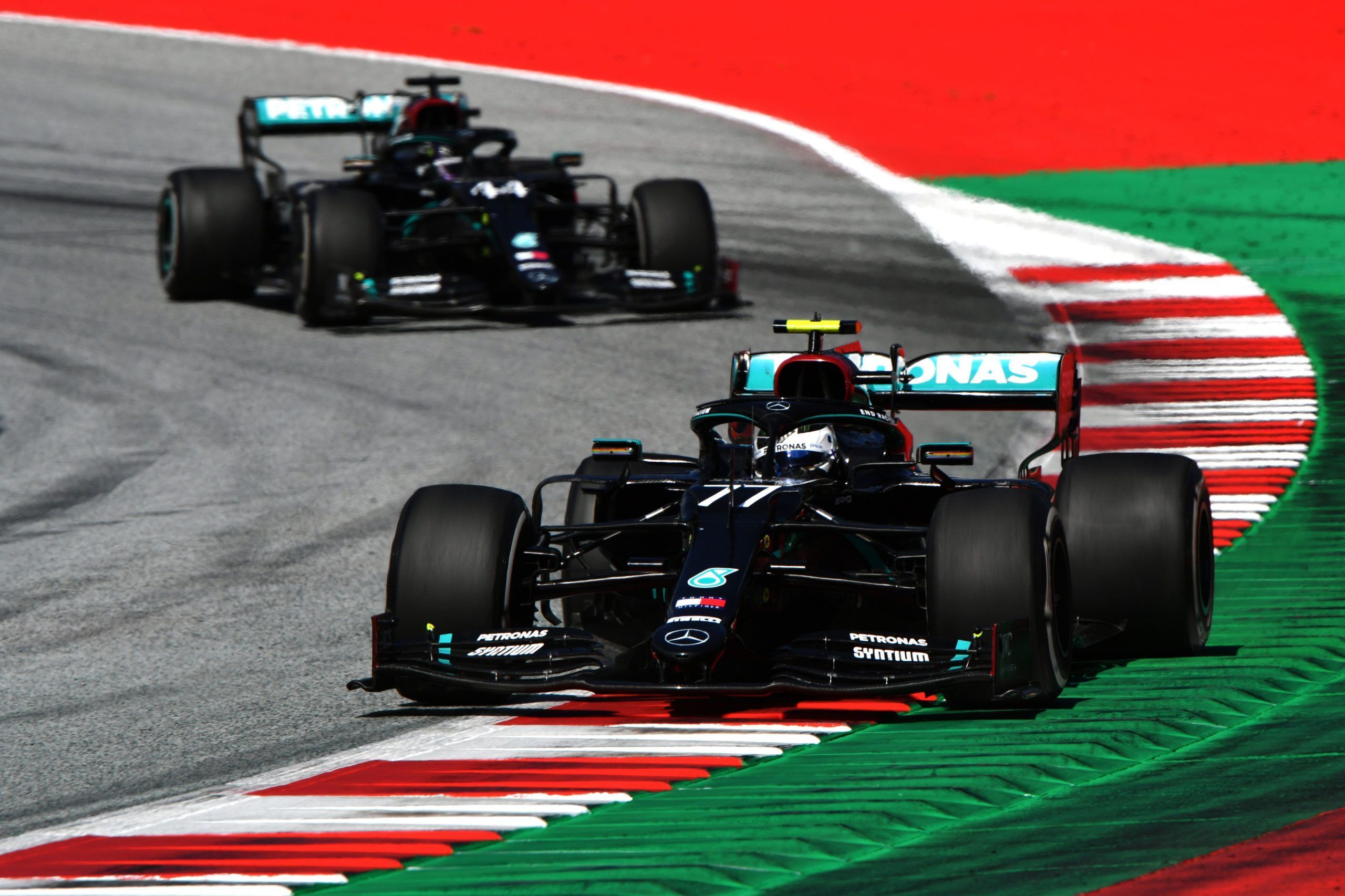 Mercedes’ Toto Wolff and Valtteri Bottas explains the troubles they had in F1 Austrian GP as they also put down any team order call.

In the F1 Austrian GP on Sunday, it became readily apparent that reliability issues would claim many victims, and at a point in the race, it looked as if at least one of these victims would be a Mercedes driver, with the chain starting with Racing Point’s Lance Stroll.

The harsh kerbs of the Red Bull Ring proved to test the F1 cars on the grid, and few felt this more so than those utilising Mercedes powertrains. Stroll failed to make it to the end of the race due to mechanical issues, and so too did Williams’ George Russell.

The issues for the Mercedes factory team flared up at roughly the mid-point of the race, at which point both drivers were instructed to stay off of the kerbs by their engineers. The F1 team’s problems escalated lap after lap, and soon warnings from the pitwall turned to critical alerts.

A slew of safety cars, in tandem with cautious driving under green flag conditions helped the teams cause, though, and the mysterious issue – pegged to be related to gearbox sensors – did not cost them. However, there remains concern that they may not be so fortunate next time around if they fail to rectify the issue before the Styrian GP this weekend. This concern, however, is not shared by Mercedes F1 boss Wolff.

The Austrian did not downplay the severity of the issue, but stated that he has a team within Mercedes that can handle the technical challenges of F1 such as this. “The situation was pretty serious, right away from the start,” said Wolff. “We saw it started with issues on Valtteri’s car, but it was something that can be an instant kill.

“Then it started on Lewis’s car. We didn’t really know what it was. We know that it was somehow linked to vibration and agitation of the car. That is why we advised them very early on to keep off the kerbs. At the certain stage, it looked like we would not finish the race with both cars.

“I think the reliability issues here come from from the kerbs. It’s a great track, but if you run the kerbs too wide – which is within the F1 rules – you damage your suspension. So it is a permanent evaluation of the driver, how quickly you want to go, how much you want to ride the kerbs and obviously, by nature, they want to go as quick as possible. And if you do that you risk suspension damage or vibrations to the car that can break it.

“We have a great group around Simon Cole on trackside reliability, and he and his team are going to solve that problem until next week,” Wolff added. “I think from what I understand is that there are solutions that we can at least improve the situation. Austria is for sure stressing these parts on the car most in all of the season. So if we find a way around of protecting the car next weekend, we should be fine. I think we have ideas.”

Austrian GP winner Bottas, too, spoke on the issues and how he dealt with them inside the F1 cockpit, telling of the internal confliction he faced. “It didn’t feel strange to me, these kind of situations, sometimes in racing, you just get into these situations and you have to deal with them and I was just trying to calculate the risk,” he said.

“I really wanted to win the race, obviously, and think about the points for the team but with the circumstances and the issue we had with reliability concerns obviously you don’t want to take too much risk by trying to find two tenths every lap by hammering the kerbs and then I get a DNF on the last lap, that would not be ideal so I tried to do the best I could really and there wasn’t for sure no discussion, at least, that I know about swapping position and in that way securing more points or anything.”

The issue forced the Mercedes drivers to alter their driving as they had to avoid the kerbs. This wasn’t so much a problem for Bottas as it was for Hamilton, though, who had a five-second penalty and closely-following rivals to contend with. There had been talk that Mercedes would order the Finn to let the Brit by so that he could pull out a gap to his adversaries, but the F1 Austrian GP winner denied there was any internal discussion of any team order move like this.

“At any point, there was no call from the team that we would stop racing each other but I got the message that Lewis also has to avoid the kerbs, so in that sense we were in the same boat,” Bottas affirmed. “For me, the whole race was… I could really control and make sure we get safely to the end with a good amount of tyres left and so on. There was no massive trouble at any point.

“I got the message that he’s got a five second penalty but there was a double yellow, so obviously you have to slow down quite a bit so then I feel like some drivers maybe slow down a bit less so they could catch-up. At the same time, we were still not using the kerbs. So, I tried to compromise making sure I really get to the flag and win the race, not risk too much, but also I tried to go as fast as I could within those limits. It’s not really my fault that he got the five seconds penalty,” summed up Bottas.

Wolff also denied that a switch of position was considered between Bottas and Hamilton as he put down the radio messages of turning engine down as nothing related to Red Bull’s Multi 21, saying it would have been far too complicated. Likely, such a move would have been controversial – especially given Austria’s history of late-race team orders. “This is nothing to do with Multi 21,” said the Austrian.

“We have never played that, unless there was a problem on the car, and we would never interfere in a fight in the first few races of a season. They were completely free to race each other. What we did that we always on both cars, we gave them the same recommendations to stay off the kerbs, and we switched the engine, because there was no competitor basically at a certain stage, we switched the engines to a lower mode to protect the power unit. There was no, zero team orders. No hidden, no subtle, and no direct.

“But if as a driver, you aren’t aware what is going on behind you, you’re just seeing your teammate in a safe second position. Maybe with all the information afterwards we would have gotten P3. There was a discussion, but that starts to get really messy. We’ve had it in Budapest many years ago, and we nearly got overtaken by Verstappen.

“The thinking that I had was that you need to explain to Valtteri what is going on, that there is a five-second penalty, and then ask Lewis in the last lap to let Valtteri pass again, so if Valtteri can’t keep up, he can’t let him past, and or, if Leclerc and Norris on fresh tyres are on his gearbox, then obviously Valtteri rather than winning the race ends up fourth. Too much complexity to do such a switch. Too much risk,” explained Wolff.