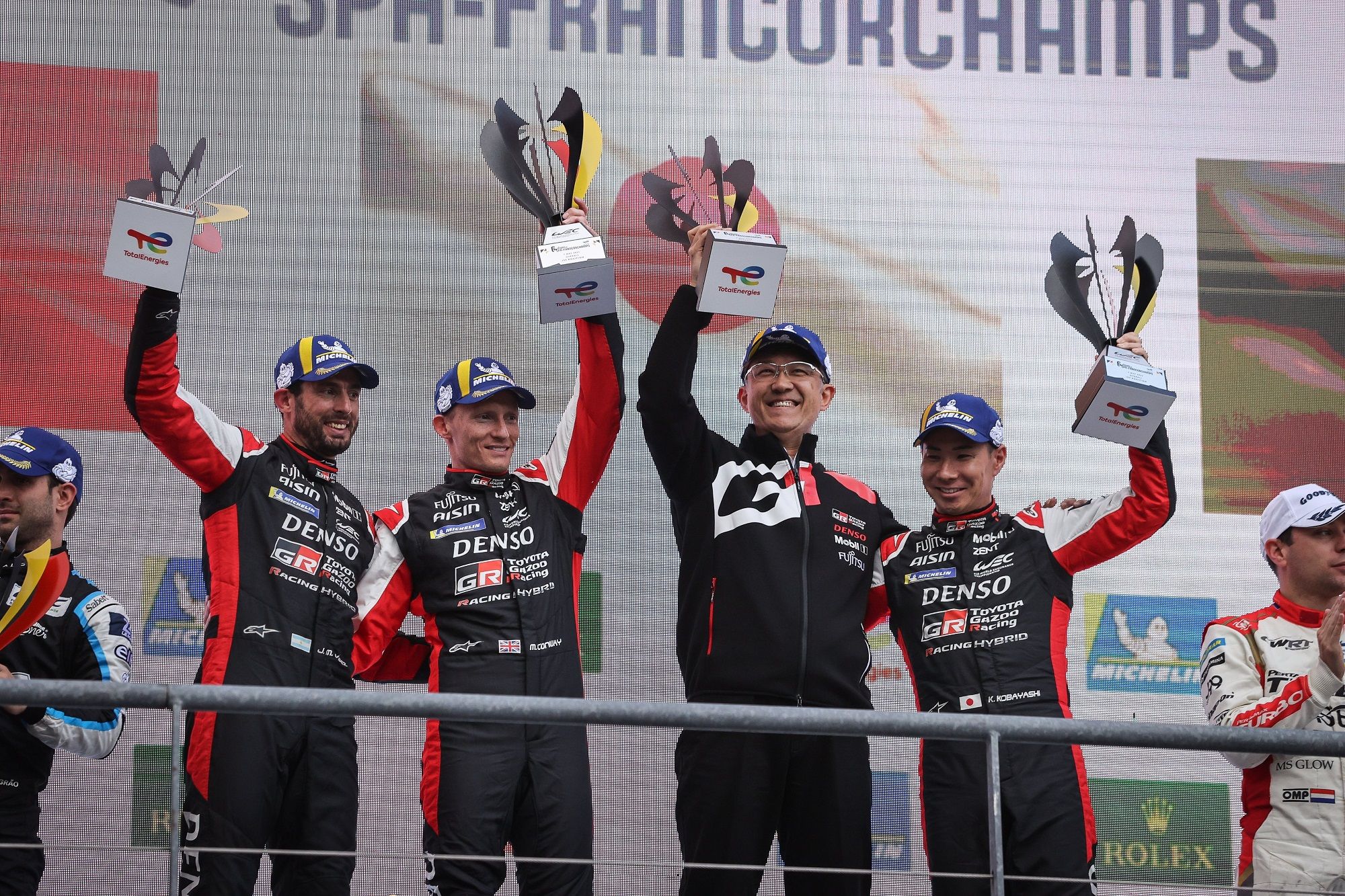 The #7 Toyota took the FIA WEC win in 6 Hours of Spa-Francorchamps from #36 Alpine in the lead Hypercar category.

The No.7 Toyota GR010 Hybrid Hypercar took its first win of the 2022 WEC season in an action-packed event at Spa today. Toyota Gazoo Racing’s Kamui Kobayashi, Jose-Maria Lopez and Mike Conway took victory at the 2022 TotalEnergies 6 Hours of Spa in a dramatic and rain affected event.

Over half of the race was run under race suspensions due to incidents and heavy rain triggering three red flag, six safety car and five full course yellows periods. But through it all came the No.7 Toyota GR010 Hybrid Hypercar, which ensured that the Japanese manufacturer scored its sixth consecutive victory at the legendary Belgian venue and its second in the Hypercar category.

Jose-Maria Lopez took the chequered flag 27-seconds ahead of the second placed Alpine ELF Team squad of Matthieu Vaxiviere, Nicola Lapierre and Andre Negrao, after largely controlling the final two hours of the race. Prior to that, the race was led initially by the pole-sitting Glickenhaus 007LMH car, then the No.8 Toyota GR010 Hybrid Hypercar and the WRT LMP2 entry, as a series of rain showers left the track un-raceable for periods of the six hours endurance test.

Glickenhaus Racing’s trio of Olivier Pla, Pipo Derani and Romain Dumas took the final step on the podium. The result came after a memorable week in which the American constructor took a maiden WEC pole. The No.8 Toyota Gazoo Racing entered Toyota GR010 Hybrid Hypercar of Sebastien Buemi, Ryo Hirakawa and Brendon Hartley retired in the second hour of the race with a suspected hybrid systems issue that stranded the car on track.

This left the No.7 Toyota able to establish some race winning momentum and enable Toyota Gazoo Racing’s president, Koji Sato, to savour the win from the podium with the winning crew. Alpine’s second place ensures that they extend their lead in the 2022 standings advantage.

Home Joy for WRT in LMP2

The local WRT team swept to a brilliant home victory as Rene Rast, Sean Gelael and Robin Frijns claimed a highly popular LMP2 victory. Frijns even led the race overall in the mid-portion of the race as he pulled away from eventual winner Mike Conway in a sensational display of wet weather driving.

It was WRT’s fourth victory since it entered the WEC a year ago and ensured that Frijns, Rast and Gelael head the points standings heading into Le Mans next month. The Ferdinand Habsburg, Rui Andrade and Norman Nato crewed Realteam by WRT Oreca-Gibson ensured it was a perfect day for the Vincent Vosse led squad, while the No.38 JOTA car of Will Stevens, Antonio Felix da Costa and Roberto Gonzalez took the final rung of the podium.

Several action-packed battles played out in the final hour of the race with Team Penske in the thick of the action as Felipe Nasr battled with the No.22 United Autosports USA car of Phil Hanson to wow the large crowd. The No.83 AF Corse entry of Francois Perrodo, Alessio Rovera and Nicklas Nielsen reprised their Sebring result by taking another Pro/Am division win to add to Rovera’s achievement  of sealing pole position in LMP2.

James Calado and Alessandro Pier Guidi claimed a sensational LMGTE Pro victory after one of the best category races seen in WEC’s decade long history. The No.51 AF Corse duo surged to the front in a rollercoaster race that saw a final hour shoot-out with the No.92 Porsche GT Team entered Porsche 911 RSR-19 driven by Michael Christensen.

Calado was able to hold off the flying Dane in the final laps, after a late full course yellow appeared to give the Porsche an opportunity to make a move. Christensen had fought to clear the sister AF Corse Ferrari driven by Antonio Fuoco in the last 30-minutes and made a decisive move at La Source despite some contact between the pair.

Calado then came under intense pressure but was able to expertly defend the lead. This was despite Christensen looking as though he might make a last ditch move into the Bus Stop chicane. But it was Ferrari that ultimately tasted the victory champagne. The No.92 Porsche had taken the lead at the start of the race but did so after some contact with the pole clinching No.91 sister Porsche started by Gianmaria Bruni.

The Italian was forced to make a slow lap with a puncture and dropped a lap on the leading cars. Bruni and teammate Richard Lietz then fought back but were only able to finish fifth. Rounding out the category podium were Antonio Fuoco and Miguel Molina in the No.52 AF Corse Ferrari 488 GTE Evo. Fuoco had initially held off the charging Christensen in the final hour.

Corvette Racing’s Nick Tandy and Tommy Milner took fourth placed points, but their race was compromised by getting stranded in the pits when they had the misfortune to stop just as the first of the three red flags was deployed.

The Harry Tincknell, Christian Reid and Sebastien Priaulx take LMGTE Am victory for the No.77 Dempsey Proton Porsche squad. It was the German teams’ first WEC win since the 2019 race at Spa. Tincknell held off a charging TF Sport Aston Martin Vantage driven by Marco Sorensen in the final laps to become the first driver to win with three separate GT marques – Aston Martin, Ford and now Porsche.

Sorensen and his teammates Ben Keating and Henrique Chaves took second just 1.5s off Tincknell as they crossed the finish line. Aston Martin enjoyed a strong result, as the Northwest AMR entry of Nicki Thiim, Paul Dalla Lana and David Pittard filled out the podium in third position.

[Note: The above story is as per press release from FIA]