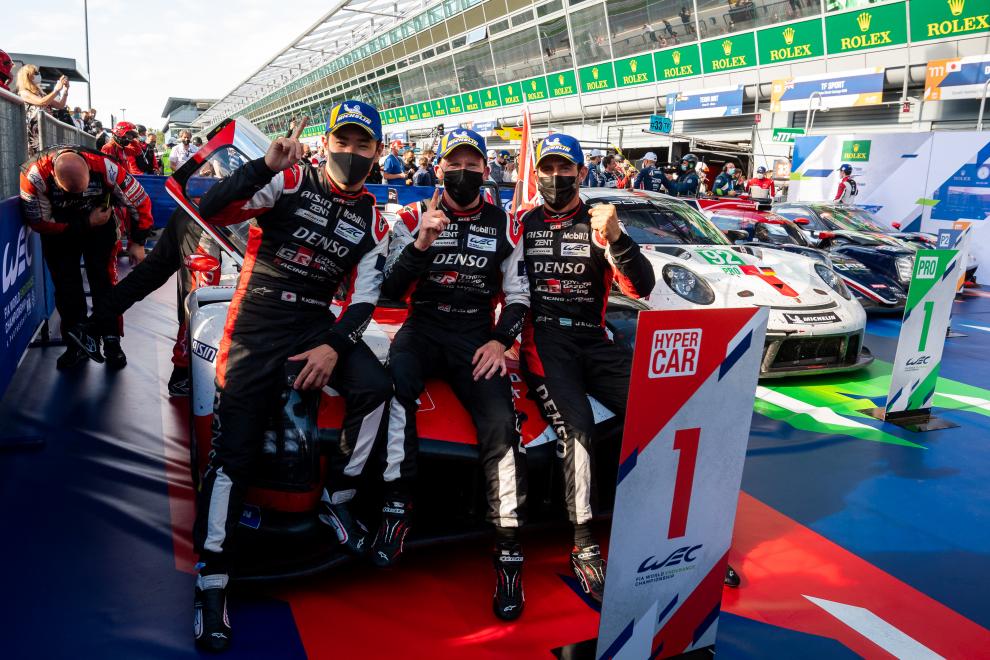 #7 Toyota crew fought-through to win FIA WEC 6 Hours of Monza ahead of #36 Alpine in the LM Hypercar category as LMP2 winner ends up on main podium.

The No.7 Toyota GR010 Hybrid driven by Mike Conway, Jose Maria Lopez and Kamui Kobayashi has won the WEC 6 Hours of Monza after a dramatic race which saw a close battle between Toyota Gazoo Racing and Alpine Elf Matmut in the event’s closing stages.

It marks the first victory of the season for the reigning World Champions in the No. 7 car, but the third win in a row in 2021 for Toyota Gazoo Racing. The all-new Toyota Hypercar led for the majority of the race after starting from pole position but a puncture and a technical issue gave Alpine a last minute chance to seize the victory.

WEC newcomers Glickenhaus Racing were also leading the race for a short period of time in the race’s fifth hour. However, the No. 709 Glickenhaus 007 Hypercar had to pit from the lead with brake issues which saw the American team drop four laps and knocked the squad out of winning contention.

In the end, it was Alpine Elf Matmut and its trio of drivers – Nicolas Lapierre, Andre Negrao and Matthieu Vaxiviere – who secured the runners-up spot. The French squad’s chances of a debut WEC victory hindered when a Full Course Yellow with 35 minutes left on the clock meant the No. 7 Toyota could allow Conway to refuel essentially allowing the Briton a free pit stop.

Meanwhile, Toyota’s No. 8 car driven by Brendon Hartley, Kazuki Nakajima and Sebastien Buemi ended the race more than 40 laps behind and fourth in the Hypercar category.  The team made a total of four pit stops following various technical issues, one of which included a problem with fuel pressure.

Elsewhere, the No. 708 Glickenhaus had a troubled day with spark plug and gearbox problems – the car which was driven by Luis Felipe Derani, Gustavo Menezes and Olivier Pla – eventually retiring mid-race after running on seven cylinders.

Following today’s WEC race, the overall Hypercar World Endurance Drivers’ Championship is looking extremely close with the No. 8 Toyota crew now leading the sister car by just six points. The No. 36 Alpine A480 Gibson car is third – a further nine points behind in the standings.

LMP2 – Second win of the season for United Autosports USA

United Autosports USA took the second win of WEC Season 9 in LMP2 after a dominant display from its talented trio of drivers: Filipe Albuquerque, Phil Hanson and Fabio Scherer. The British team also finished third in the overall classification following various mechanical or technical issues with the five cars competing in the Hypercar category.  United Autosports USA become only the fourth LMP2 team in WEC’s history to do so.

Early leaders Team WRT finished second after the squad got unlucky when the only Safety Car of race came out just after third hour, they eventually finished just under one minute behind the category winning No. 22 Oreca. It marks the second consecutive runners-up position for Team WRT’s Robin Frijns, Charles Milesi and Ferdinand Habsburg on what is only their third race in the WEC.

Polish squad Inter Europol Competition place fine fourth after Alex Brundle, Renger van der Zande and Jakub Smiechowski fought back from an early penalty for contact at Turn 1 with the No. 70 Real Team Racing Swiss entry.  Elsewhere, the No. 28 JOTA trio of Stoffel Vandoorne, Sean Gelael and Tom Blomqvist recovered from a crash in qualifying which saw the team start from the back of the grid today to finish fifth in class.

Sixth overall was the No. 21 DragonSpeed entry driven by Henrik Hedman, Juan Pablo Montoya and Ben Hanley.  In the LMP2 standings, United Autosports USA now lead the No. 38 JOTA car by 18 points going into Le Mans. Third in the points is the No. 28 JOTA car with 53 points, three points adrift of the sister car.

Porsche beat Ferrari on their home patch after a sensational race-long battle between the No. 92 Porsche 911 RSR-19 of Kevin Estre and Neel Jani and the No. 51 AF Corse Ferrari 488 GTE Evo of James Calado and Alessandro Pier Guidi. The two cars were never separated by more than a few seconds over the duration of the 6 Hours of Monza but it was a late race splash for fuel by the Ferrari squad which ultimately settled the result.

It had been a manic ‘cat and mouse’ race up until the final moments in what was one of the closest LMGTE Pro class races for many years as the two completed laps almost at qualifying levels of pace. Both cars spent time in the lead during the race as the battle undulated on-track and in the pitlane. Ultimately Estre and Jani took the chequered flag after Alessandro Pierguidi headed for his ‘splash stop’ with just three minutes of the race remaining.

The win for Estre and Jani sees the pair vault back in to lead of the LMGTE PRO category title chase after Calado and Pier Guidi had themselves taken over at the top after last month’s Portimao race.  The No. 91 Porsche 911 RSR-19 of Gimmi Bruni and Richard Lietz sealed third position after a similarly tight battle with the No. 52 AF Corse Ferrari driven by Daniel Serra and Miguel Molina.

Porsche initially split its strategy after an early Full Course Yellow period and shortly after Richard Lietz was also able to take second from teammate Jani after Calado surged to the front. But both the No. 91 Porsche and the No.52 AF Corse Ferrari slipped slightly back in the second phase of the race but were only split by 3.4s at the chequered flag.

LMGTE Am: AF Corse win from the back!

While there was some disappointment for AF Corse Ferrari in the LMGTE Pro category, there was joy in the LMGTE AM class as the No.83 Ferrari 488 GTE Evo cored a famous victory. Alessio Rovera, Francois Perrodo and Nicklas Nielsen drove an impeccable race to cut through the 16 car class field from the very back of the grid.

The trio had seen its qualifying effort cancelled due to a technical infringement on Saturday evening but it merely seemed to concentrate their efforts. Rovera immediately made progress and was able to carve his way through from the back and lay the foundations for a remarkable victory. Perrodo completed a fine double stint before Nielsen was able to complete a solid double at the end to consolidate the win and banish the memory of both a difficult race in Portugal and the Monza qualifying woes.

While AF Corse were serene at the front, behind there was late drama of epic proportions between two Aston Martins – the D’Station entered car and the Aston Martin Racing entry. Tomonobu Fujii was reeled in by Augusto Farfus in the final minutes and the two battled door-to-door in the final two laps to thrill the Monza crowd.

Farfus ultimately succeeded and made his move to take the runners-up position, while D’Station Racing registered its best WEC result, taking the line just 0.190s behind the No.98 Aston Martin Vantage. Elsewhere, there was frustration for the pole-sitting TF Sport Aston Martin car when Ben Keating suffered a puncture after having led for much of the first hour.

Here’s how WEC 8 Hours of Portimao panned out

[Note: The above is as per FIA WEC press release with no edits made]