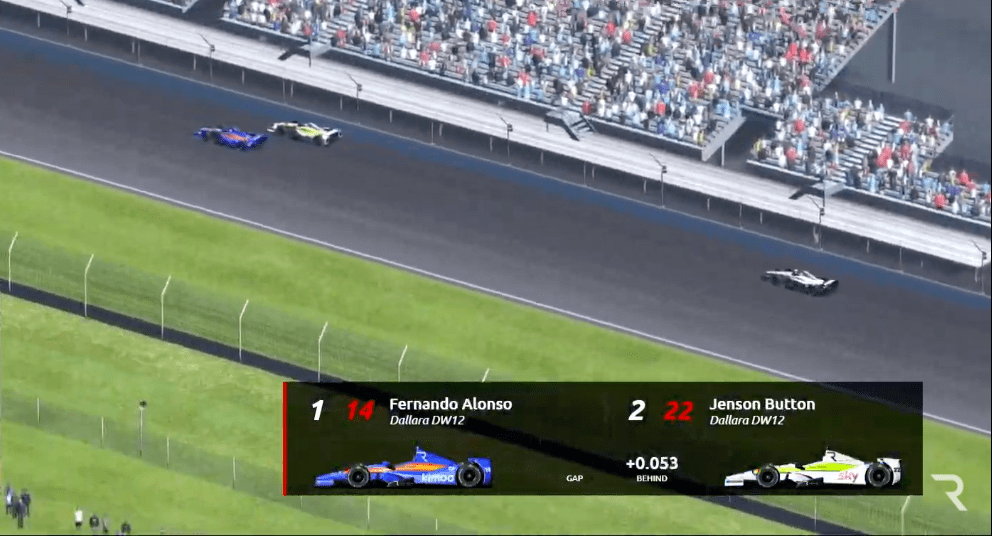 Formula E had its fifth round in the Race at Home Challenge with Oliver Rowland winning as All-Star ESports Series continued with Fernando Alonso winning the Indy rounds.

The fifth Formula E Race at Home Challenge round took place at Berlin’s circuit. As in other rounds, they had two races, where one was the Challenge Grid with a mix of ESports racers and real racers along with some Youtube personalities.

The other one was the actual Formula E drivers as they used the rFactor 2 game. The Challenge Grid saw BMW Andretti’s Kevin Siggy on pole as he led the way for the most part to win from Jaguar Racing’s Petar Brljak and Mahindra Racing’s Lucas Mueller.

The main Formula E race saw Mercedes’ Stoffel Vandoorne on pole from Nissan’s Oliver Rowland and Audi’s Daniel Abt. The Belgian led the way at the start bu Abt got through to lead early on as he dropped to third behind the British racer.

As Vandoorne and Abt tussled by hitting each other, Rowland sneaked past to lead the race as Wehrlein and Mortara stationed behind in fourth and fifth. The Belgian got through the German but was stuck behind the British racer for the rest of the race.

Rowland scored his first Formula E Race at Home Challenge in Berlin as Vandoorne ended up second with Abt registering his first podium too. Wehrlein in fourth kept his championship lead with Mortara rounded out the Top 5 position.

The rest of the Top 10 had Mueller in sixth from Gunther and Lotterer as DS Techeetah’s Antonio Felix da Costa was ninth from Jaguar’s Mitch Evans as he fended off Porsche’s Neel Jani for the last point taking position.

Here’s where you can watch it in full: https://www.youtube.com/watch?v=ra0ZwHI0kOY

To commemorate the Indy500 that would have been on this memorial day weekend, the All-Star ESports Pro Series saw all races take place at a virtual rendition of IMS, with all but the Legends Trophy running ‘Formula race’ cars on the road course, as the legends competed on the 2.5-mile oval in 2012 DW12 IndyCars.

In the pro drivers race, Augustin Canapino started in pole position and led into Turn 1. Maintaining this lead, and extending it, for that matter, he won leading championship protagonists Nicki Thiim, Charlie Eastwood, Bradley Smith, and Tom Dillman.

After, there was the professional ESports driver’s race, with Rudy Van Buren topping qualifying, and topping the leaderboard in the race that followed. Behind him was Bono Huis, Jernej Simoncic, Nikodem Wisniewski, and Alex Siebel.

The legends race followed, with a star-studded entry list including the likes of Mario Andretti, Helio Castroneves, and Fernando Alonso – the latter returning after last weekend. Of the field, Petter Solberg was the leading qualifier, with Jenson Button trailing him.

After some time in the race, though, he had dropped out of the primary fight, and Alonso and Button had established themselves as the leaders, battling from start to finish, at which point the Spaniard won his first race at the Brickyard by the narrowest of margins.

Behind Alonso and Button was Jan Magnussen, who was trailed by Tiago Monteiro and Tony Kanaan. With this behind them, it was time for the reverse grid races, the first of which was won by polesitter Harry Tincknell among a field of pro drivers.

Tom Ingram and Job Van Uitert rounded out the top three of that particular race, with Charlie Eastwood and Benyahia crossing the bricks fourth and fifth respectively. Next up came the sim racer’s reverse grid race, in which Michael Romanidis was granted pole having previously qualified last.

Ultimately, Kuba Brzezinski won leading Romanidis Liam De Waal, Yuri Kasdorp, and Zbigniew Siara. Heading into the legends reverse grid race, Andretti was the favorite, with his supreme pace in race one combined with a poor qualifying setting him up for success in the second event, even if he wasn’t quite starting on pole, as Mika Salo held this status.

However, the start didn’t quite go his way, as he was outdone by rivals such as Alonso, who quickly carved through the field at a rapid pace, and battled with Monteiro and Salo, before the latter spun out on the back straight.

Reminiscent of how Button and Alonso battled, the Spaniard and Monteiro swapped positions lap after lap, navigating traffic along the way. Ultimately, it was the former who did the double with Monteiro second, leading Castroneves, Button and Brabham.

Here’s where you can watch it in full: https://www.youtube.com/watch?v=EHv0ghX26e0

Veloce Not The GP:

On the same weekend as the Indy 500, traditionally, is the F1 Monaco GP. So it’s fitting that Veloce Esports, who run ‘Not The GP’ races for each round of the 2020 season that isn’t, have run a Not the… Monaco GP event.

In the race, James Baldwin (Mercedes) nabbed the all-important pole position on the street circuit, as McLaren driver Tiametmarduk dropped out of the session prior to the commencement of the race.

After this, the time came for Top 10 reverse race but this time under the shadow of the night. In his Racing Point, Jay Pietsmet started on pole, but when the checkered flag flew, it was Williams’ Tom97 in the top spot, leading Bolukbasi, Red Bull’s Depielo, Alfa Romeo’s Thibaut Courtois, and Haas’ rAll as Leclerc and Norris both had troubles.

Here’s where you can watch it in full: https://www.youtube.com/watch?v=l1IpPZetLv4