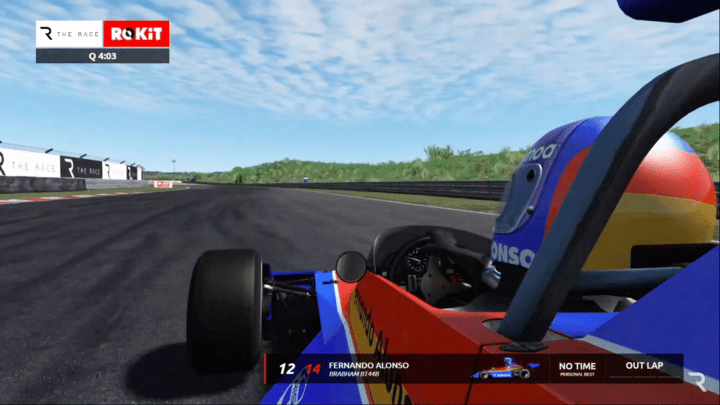 Formula E had its fourth round in the Race at Home Challenge with Pascal Wehrlein winning as All-Star ESports Series continued as Fernando Alonso made his debut.

The fourth Formula E Race at Home Challenge round took place at Hong Kong circuit. As in other rounds, they had two races, where one was the Challenge Grid with a mix of ESports racers and real racers along with some Youtube personalities.

The other one was the actual Formula E drivers as they used the rFactor 2 game. The Challenge Grid saw Porsche’s Joshua Rogers on pole as he led the way, for the most part until Mahindra Racing’s Lucas Mueller crept into his gap.

Mercedes’ Stoffel Vandoorne was third. The race started off well off the line but chaos ensued in Turn 1 with a pile-up as Wehrlein led the way from Jaguar Racing’s James Calado in second as pole-sitter Mortara was also involved in the crash.

He recovered but not for long as Wehrlein continued to lead from Vandoorne, with Calado hanging on in third. Behind them, it was Mercedes’ Nyck de Vries in fourth ahead of Mortara, with DS Techeetah’s Antonio Felix da Costa in sixth.

Up front, Wehrlein had it under control to score his second Formula E Race at Home Challenge win in Hong Kong as Vandoorne was second with Calado rounding out the Top 3 to register his first podium. De Vries and Mortara finished in the Top 5.

The rest of the points scoring position had da Costa in sixth ahead of Envision Virgin’s Robin Frijns, NIO’s Oliver Turvey, Nissan’s Sebastien Buemi and Oliver Rowland in the Top 10, with NIO’s Ma Qing Hua missing out just.

Taking place at the 2020 version of the Zandvoort circuit on rFactor2, The All-Star ESports Pro Series returned for its third event of the second season. After qualifying for the Pro Cup real-world drivers race, it was Esteban Gutierrez on pole position.

The Mexican took the win from Tom Ingram, Agustin Canapino, Bradley Smith, and Nicki Thiim in the Top 5. The ‘Sim Master’s’ was next with Rudy Van Buren on pole as the Dutchman led the way to eventually score the win.

Behind him was Nikodem Wisniewski and Yuri Kasdorp, who led Mroczek and Bono Huis. This wrapped up the first round of Pro races and led into the first race of the Legends Trophy, which saw Jan Magnussen take pole position.

The big news was the ESports debut of double F1 champion, Fernando Alonso, as he qualified fourth after only getting his rig last night. Magnussen won leading Jenson Button, Juan Pablo Montoya, Mika Salo and Vitantonio Liuzzi in the Top 5.

The debut for Alonso, though, ended up in a nightmare with a DNF as his run was myriad of errors and on-track incidents. Moving on, the first of the reversed races were the next to be raced, with Aidan Millward leading the Pro Drivers off the line, starting in first.

Once again the pole-sitter won, with Millward fending off Bruno Spengler, Juan Manuel Correa and Seb Morris. In accordance with the original order of races, it was the sim master’s race next with Kevin Siggy starting in the prime grid spot.

He led from lights to flag by the narrowest of margins, beating out Kuba Brzezinski, Liam De Waal, Nuno Pinto and Borja Millan. The final race of the day was the Legends Trophy, with Emanuele Pirro on pole as The Italian ahead of Andy Priaulx, Darren Turner, Montoya, and Button. It was another DNF for Alonso, thereby ending his ESports run in disaster.

Here’s where you can watch it all: https://www.youtube.com/watch?v=DyxqJ4ittLg