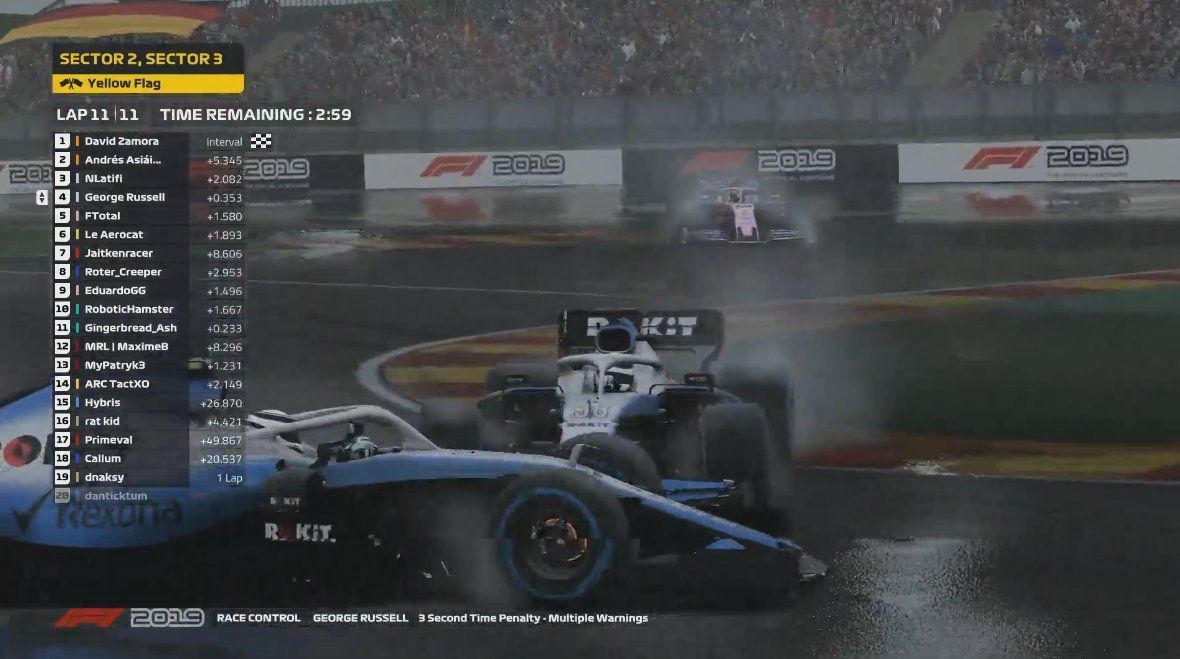 With no Virtual GP this weekend, F1 staged Challenge Williams with both its drivers, while the whole week saw Charles Leclerc & co go crazy on Twitch.

Much like Challenge Lando, F1 had Challenge Williams with both George Russell and Nicholas Latifi involved. The first event had the duo compete in the FW14 for five laps, with Jack Aitken and Daniel Ticktum also involved at Japan’s Suzuka circuit.

It was a five-lap race which was won by Russell as the Brit took the one point away from Latifi. The second challenge had seven challengers which included footballers, gamers along with real racers like Beitske Visser and Bart Hortsen.

They had a 13-lap race at Silverstone as Hortsen took the win from Latifi and Russell, where both were handed time penalty. The Canadian had three points to the Brit’s two after the two challenges as the winner was to be decided in the final event.

The third challenge had fans join in Russell and Latifi to compete at Spa-Francorchamps in a wet track with 11 laps. It was a chaotic start where both the Williams drivers dropped down the field. But they recovered well despite a last lap collision.

Latifi was to finish third but a hit from Russell dropped him to fourth, with the Brit was sixth eventually. With points only for first and second along with the fastest lap, it was the Canadian staying on with three and Brit with two, although Norris remains on top.

Here’s where you can watch Challenge Williams in full: https://www.youtube.com/watch?v=Gnc-sKpPtfw

Norris and Max Verstappen were the first to join Twitch but with the COVID-19 pandemic, it got drivers like Charles Leclerc, Alexander Albon, Latifi and Russell joined in too as they started streaming their ESports races and other gaming events they played.

Post their Race for the World charity, they have not only played Call of Duty and Fortnite, but also Euro Truck Simulator along with the F1 races. Among all, Leclerc has been quite a surprise with the Monegasque going bonkers twice on his stream.

He not only wore a banana dress but used Twitch to change his voice to a Chipmunk and also into an Alien. In terms of racing, Leclerc, Albon and Russell along with Arthur and Luca had more fun, when they raced Monaco, Suzuka, Silverstone, Baku and Spa in reverse.

Leclerc also raced in GT World Challenge event in a Ferrari, where Jenson Button also competed in a McLaren. The Monegasque had practiced a bit where Valentino Rossi, Antonio Fuoco and Francesco Bagnaia were involved too.