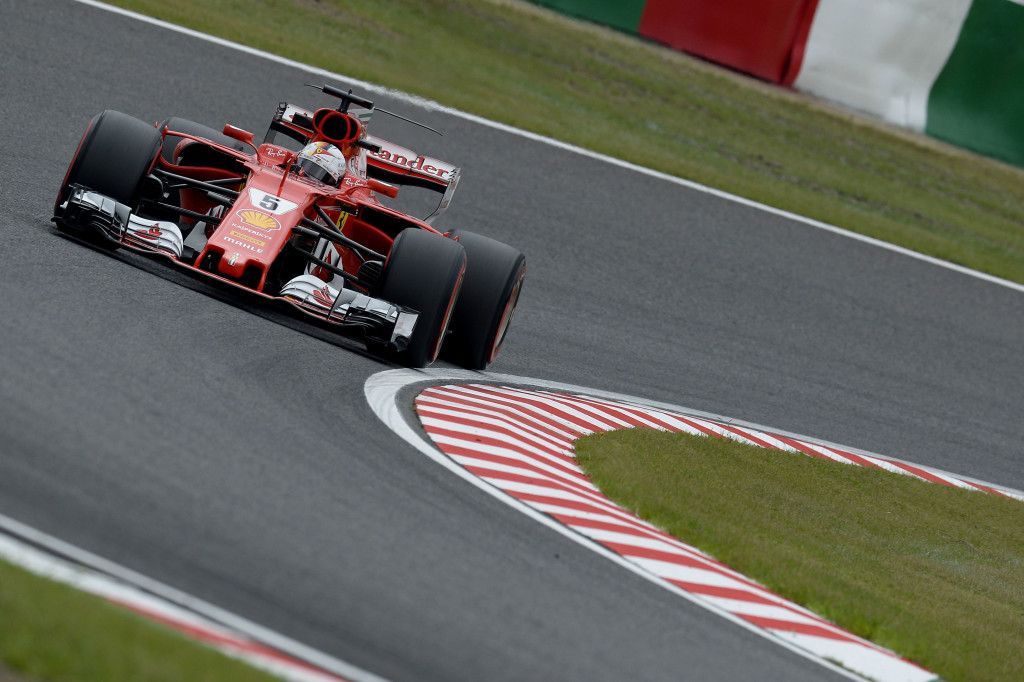 With rain forecast for the afternoon, teams wasted no time getting up to speed – leading to several changes at the top as Ferrari, Mercedes and Red Bull once again proved incredibly evenly matched.

Vettel eventually settled matters in the Scuderia’s favour with a late flyer of 1m 29.166s on Pirelli’s supersoft tyres – just over two-tenths quicker than Hamilton’s best. Ricciardo and Kimi Raikkonen were fractions further down the road, meaning the top four drivers – comprising three teams – were all covered by less than half a second.

Vettel’s best time came shortly after Sainz violently hit the barriers exiting the Turn 11 hairpin. The Spaniard inadvertently dropped a rear wheel on the dirt exiting the left-hander, flicking his Toro Rosso sideways and sending it spearing into the inside tyre wall. Sainz, who carries a 20-place grid penalty into Sunday’s race, was unhurt, although his car suffered extensive damage.

At that point it was Hamilton who had set the pace, a few hundredths ahead of Vettel – but with the latter yet to complete a run on the supersoft. When the session resumed Ferrari duly sent out both their drivers on the red-marked compound, with Vettel surging ahead – his time eclipsing the official lap record, and coming close to the quickest ever lap of Suzuka, dating back to Michael Schumacher and 2006.

Valtteri Bottas finished fifth in the second Mercedes, albeit almost a second back from Vettel – while Max Verstappen paid the price for a wild moment at Spoon that consigned him to sixth in the second Red Bull. The Dutchman also experienced charging issues on a subsequent attempt to improve.

Kevin Magnussen backed up a strong showing for Haas by edging McLaren’s Fernando Alonso for 11th, despite being kept in the garage for much of the opening half of the session by a water pressure issue.

Sainz eventually wound up 17th, one spot and a few tenths ahead of Toro Rosso team mate Pierre Gasly.

Conditions were so bad that the start of FP2 was delayed indefinitely – and when the lights did eventually go green after 45 minutes, few drivers rushed to venture out.

Ferrari’s Kimi Raikkonen eventually broke the silence for an exploration lap, but it wasn’t until Force India’s Sergio Perez and Esteban Ocon headed out that the first flying laps were posted, with Ocon getting the best of that inter-team duel with a 1m 49.518s, some 19 seconds off his FP1 best.

Only three other drivers posted times – among them was Hamilton, who moved Mercedes back to the front with a lap in the 1m 48s bracket – three quarters of a second faster than Ocon.

Williams’ Felipe Massa and Lance Stroll completed the top five, the latter having saved a wild moment of aquaplaning that sent him perilously close to the barriers on the outside of Turn 1.

Carlos Sainz, meanwhile, managed to go out for two quick installation laps, Toro Rosso having repaired the extensive damage incurred in his heavy crash in FP1.

The rain is expected to last into tomorrow, with the prospect of both FP3 and qualifying being held in wet or mixed conditions.