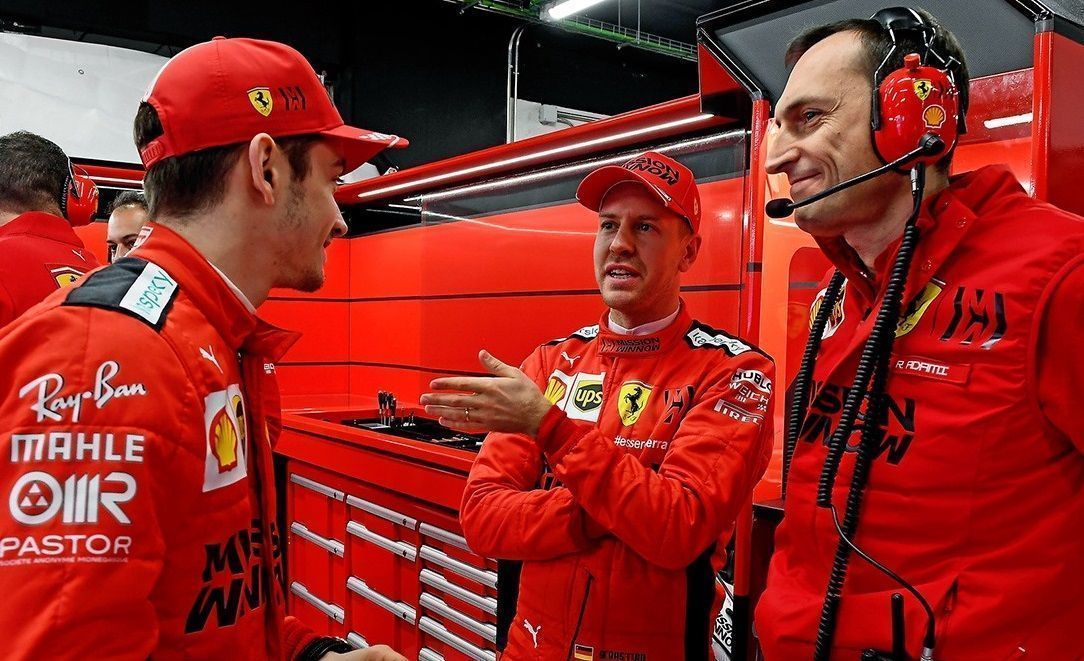 With such a shock split between Sebastian Vettel and Ferrari, there were plenty of reactions to be had among the F1 community.

Whenever a coveted seat becomes vacant in F1, people take notice in a big way, and there is no shortage of commentary. And so it tracks that, the moment news broke that Vettel and Ferrari had decided to cut things off, there was an outpouring of reactions.

It was led by his current Ferrari teammate Charles Leclerc with the likes of Jenson Button and even commentators like Martin Brundle, also giving their bits. The surprise of the lt was the reaction from George Russell, who kick-started his powerpoint programme.

Some went a comedic route with their public reactions, while others – mainly those who worked closely with him at the Italian – posted heartfelt messages, and some were more professional, talking about the impact of this on F1, and often, their teams.

Apart from the the mentioned below, Red Bull Racing consultant Dr. Helmut Marko also voiced his opinion on RTL and Sky Germany, where the Austrian indicated that the team doesn’t have enough finance for both Vettel and Max Verstappen.

Here’s some of what was said with regards to Sebastian Vettel:

It's been a huge honor for me to be your team mate. We've had some tense moments on tracks. Some very good ones and some others that didn't end as we both wanted, but there was always respect, even though it wasn't perceive this way from the outside.
1/2 pic.twitter.com/cN0E9t3huw

I've never learnt so much as I did with you as my teammate.
Thank you for everything Seb. pic.twitter.com/jRHEsvMYvg

Well that’s a bit of a Surprise, only Vettel & Binotto know the true reason for Seb walking/being helped out of a very big red door at the end of this year. Hopefully Vettel wants to continue as it would be a shame to lose a driver with such talent from the F1 grid. pic.twitter.com/Y5BdV7vrp2

Seb definitely talking with at least one other team so this can’t be just about retirement. The release makes it clear it’s not about money. It obviously can’t be about this season’s performance. So must be about status and controls generated from the bruising incidents of 2019 https://t.co/M5widTn75S

I’ll take a punt on this. Sainz to Ferrari. Ricciardo to McLaren. Vettel or Alonso to Renault. I’ll miss Seb if he retires, quality guy, quality driver. A champion and an adult.

“Sebastian is a great driver, a major personality and an asset to any F1 team. When looking to the future, our first loyalty lies with the current Mercedes drivers. But naturally, we must take this development into consideration.”

“The speculation was going on a bit, is he going to continue with Ferrari or not – well today it’s out, he’s not. I guess also very soon we’ll find out who the replacement is going to be. It’s definitely not me, I can tell you. I’m at Red Bull. I saw some questions coming along if I was going to Ferrari, but I’m not. It is what it is.

“Somebody else gets an opportunity to drive now for Ferrari, and of course, it’s a great team, and I’m sure they will make the right decision about the next driver. Let’s see what’s going to happen there. I think it’s not going to be the Italian sounding name (Ricciardo). Let’s see. At the end of the day, it’s just a guess. We’ll have to wait and see.”

“Honestly, I would – I don’t know if he would – go to a racing team that isn’t a super-top team, but try to work with people who build a team. I just don’t see many reasons why he should go to Mercedes, for example. So he would be an absolute win for a team under construction and it would also be good for him to do something completely new, like when he started with Red Bull.”

“The option [of retiring] is definitely in his head, he’ll think about it.” He could well imagine that Vettel now thinks: I have achieved everything I want to achieve. Of course the big title with Ferrari is missing, but it became world champion with Red Bull and shaped F1 for years.

“But looking at the future, I said relatively early on that McLaren could be an option with an Andreas Seidl, who in my opinion is one who can lead McLaren back to where they were in the past. I think it would be a good combination. The basis for this would be the necessary motivation that Vettel would have to bring for a middle-class team.”

“Then German motorsport and international motorsport would be an absolute size and a guy would be lost. That would go too far for me to speculate in this direction. I don’t think he has any other alternative after Ferrari.”

“It is a bit of a shame especially for Sebastian, who had a completely different dream with Ferrari. If he feels comfortable with it, that’s okay. It was then foreseeable at the end of the season and especially from Monza that the team had listened to Leclerc. I think there was a lot more quarreling behind the scenes than we can imagine. If a driver no longer feels comfortable or no longer feels the support, then he has to go.

“Sebastian was a bit unlucky that Leclerc had such a strong year. Of course there is a possibility that it will stop. But I read that he said that the Ferrari thing failed because it was not long-term. He sees himself at an age when he wants to think and drive for a long time. I am very sure that he has alternatives. He doesn’t have a manager, but he would be badly advised to make a decision without having an alternative.”