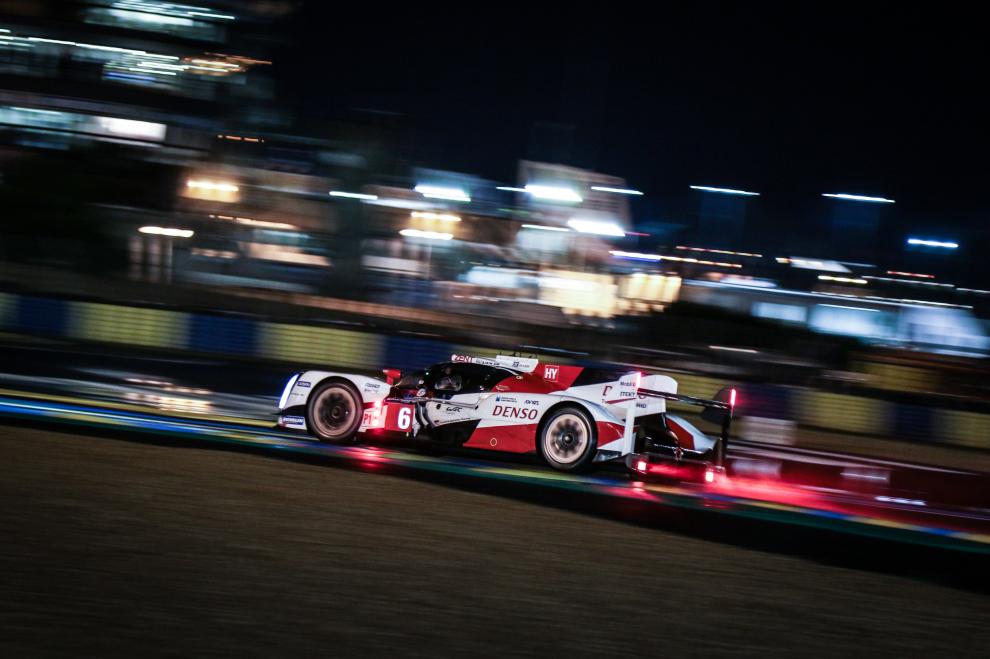 With six hours to go at Le Mans, Toyota Gazoo Racing has a one-two lead in the 24-hour race with Sébastien Buemi in the No. 5 entry in the lead.

During the first six hours, the No. 6 Toyota Gazoo Racing TS050 Hybrid and the No. 1 Porsche Team 919 Hybrid were swapping the lead, depending on the pit cycle. As the race progressed, Toyota benefited from being able to do stints of 14 laps as opposed to 13 laps of Toyota and Audi.

After the early turbo issues of the No. 7 machine that cost six laps, Audi Sport Team Joest’s hopes were on the No. 8 machine. The No. 8 Audi was running fifth in the eight hour but it fell a lap behind the leaders in the eighth hour when its illuminated number panel had to be repaired.

The front-running No. 1 Porsche crew faced a big disappointment in the ninth hour. A water pump failure caused a lengthy repair and the car lost 38 laps in the pits. While the podium chance is gone, the No. 1 car continues in the race as it can still achieve World Endurance Championship points for Porsche.

The first safety car period happened eight and a half hours into the race to repair damaged guardrails. The race-leading No. 6 Toyota pitted right after the safety car period and was overtaken after the stop by the No. 2 Porsche for the lead. Yet the Porsche couldn’t retain the lead when it pitted and once again the Toyota was able to do stints one lap longer than the Porsche.

Marc Lieb had a great stint in the No. 2 Porsche in early morning hours, catching the leading No. 6 Toyota. Yet the Porsche in second place suffered a slow puncture in the 14th hour, which allowed the No. 5 Toyota to get to race for the second place.

Incidents by LMP2 cars in the 17th hour brought the safety car out, which split the strategies of Toyota and Porsche. The No. 6 and No. 5 Toyotas were running first and second ahead of the No. 2 Porsche and the safety car cut the gaps. The two Toyotas pitted for fuel and tires from behind the safety car, which gave the Porsche a lead of over a minute at the restart. Yet that lead wasn’t enough for the Porsche which pitted two laps after the restart and rejoined behind the two Toyotas. Meanwhile, Sébastien Buemi in the No. 5 was the faster Toyota driver and had passed Mike Conway of the No. 6.

During the night, LMP2 didn’t offer close wheel-to-wheel racing for the lead. The Oreca-Nissan of the previous leader Manor failed to restart after a pit stop. The team had to change the battery and the starter motor, causing the car to fall from the lead battles.

When the race reached its halfway point, three LMP2 cars were on the class lead lap with big margins. The No. 36 Signatech Alpine entry with its Alpine-badged Oreca-Nissan was dominating the class. The No. 46 Thiriet by TDS Racing Oreca-Nissan had climbed into second place following a one-minute stop-and-go penalty for the No. 26 G-Driver Racing Oreca-Nissan that barely remained on lead lap.

The most notable incident in LMP2 happened in the 17th hour when Pierre Thiriet had a crash at Mulsanne, forcing the Thiriet by TDS Racing Oreca to retire from second place. With six hours to go, Signatech Alpine leads LMP2 with the second-placed No. 26 G-Drive entry barely staying on lead lap. No. 37 SMP Racing entry is in third place, already three laps from class leader.

Ferrari leads in GTE-Pro and –Am

GTE-Pro has become a battle of the sole Ferrari 488 of Risi Competizione against the Ford GTs of Chip Ganassi Racing. Despite being hit by the Balance of Performance adjustments, the Ford GTs have been very strong in the race. The start of the race was worrying for the new Ford GTs as the No. 67 machine lost two laps because of gearbox issues. Yet once the track dried after the first hour’s rain, the three other Ford GTs of Chip Ganassi Racing were racing in the front.

Another Ford GT that was hit with trouble was the No. 66 machine whose illuminated number panel had to be repaired. Yet there were still two Ford GTs running in the front, with Risi Competizione’s Ferrari as the only car that could match them.

While AF Corse, the other team running the new-for-2016 Ferrari 488 GTEs, was struggling, Risi Competizione was able to match the Ford GTs. In the early morning hours, the Risi Ferrari took the lead in GTE-Pro. At the six-hour mark, the Risi Competizione leads by half a minute to the second-placed No. 68 Ford and by over two minutes to the third-place No. 69 Ford. The No. 95 Aston Martin Racing entry is in fourth place, already a lap behind the class leader.

A Ferrari is in GTE-Am lead as well. The No. 62 Ferrari 458 Italia of Scuderia Corsa leads the GTE-Am clas by a lap to the Porsche of Abu Dhabi-Proton Racing in second place.