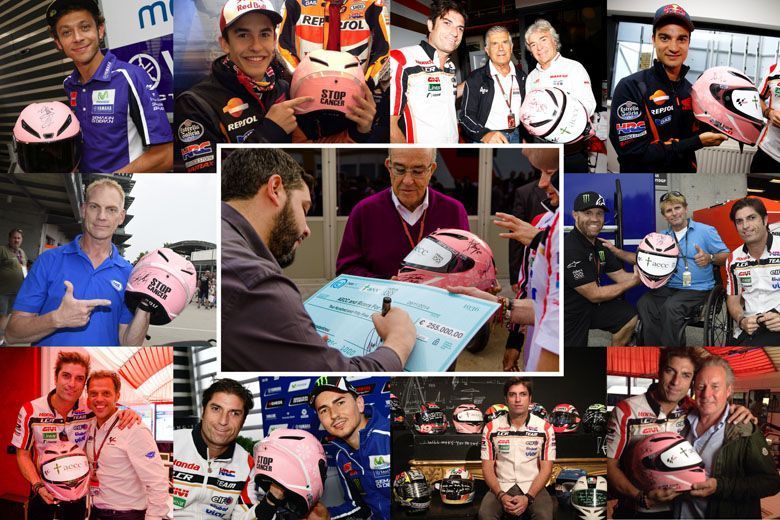 Having been signed by 12 motorcycling World Champions, a “Stop-Cancer” helmet has been auctioned off for a record-breaking £200,000, (€255,000), all of which will be donated to charity and in doing so becomes the most expensive helmet in the world.

Alberto Hernandez is a Spanish university student who has always been a huge fan of motorcycling. His great passion for two-wheeled sport led him to meet his compatriot Oscar Haro, a member of the CWM LCR Honda Team run by former grand prix winner Lucio Cecchinello. Through their friendship the pair came up with the idea of a project to collect funds for AECC, (Spanish Association against Cancer) (www.aecc.es) and Riders For Health (www.riders.org), the official charity of MotoGP.

Their plan was to create a pink helmet, the colour associated with many cancer research charities, then to get it signed by some of the most famous riders in motorcycling history. They would then put it up for auction and donate the proceeds to charity. No sooner said, than it was done.

Giacomo Agostini, Angel Nieto, Valentino Rossi, Jorge Lorenzo, Marc Márquez, Dani Pedrosa, Wayne Rainey, Loris Capirossi, Àlex Crivillé, Wayne Gardner, Scott Russell and Randy Mamola; These are the names of some of the sport’s greatest ever champions who put their support behind the initiative and autographed the helmet. 12 World Champions, whose careers combined make a total of 58 world titles. The helmet also got the approval and autograph of the CEO of Dorna Sports (MotoGP promoters), Carmelo Ezpeleta.

Thanks to the collaboration of the legends from both past and present, as well as help from Dorna, TV stations, Radio, Press and Social Media the charity project was seen by over 10 million people across the world. With so much effort put in to promoting the auction, fate also had a hand in the record purchase.

Anthony Constantinou, CEO of CWM FX and the Title Sponsor of the CWM LCR Honda Team from 2015, was at Valencia for the last race of the MotoGP season. Having heard about the auction, he decided to take part online and offered up a staggering sum of £200,000 (€255,000), which left everyone involved speechless.

Anthony Constantinou said: “With so many families affected by cancer, it’s important that we all join together to support the charities which provide vital services for patients and their loved ones. The team has done an excellent job in raising awareness and funds. I’m pleased I could play a part in this deserving cause and I hope it inspires others to get involved in the fight against cancer.”