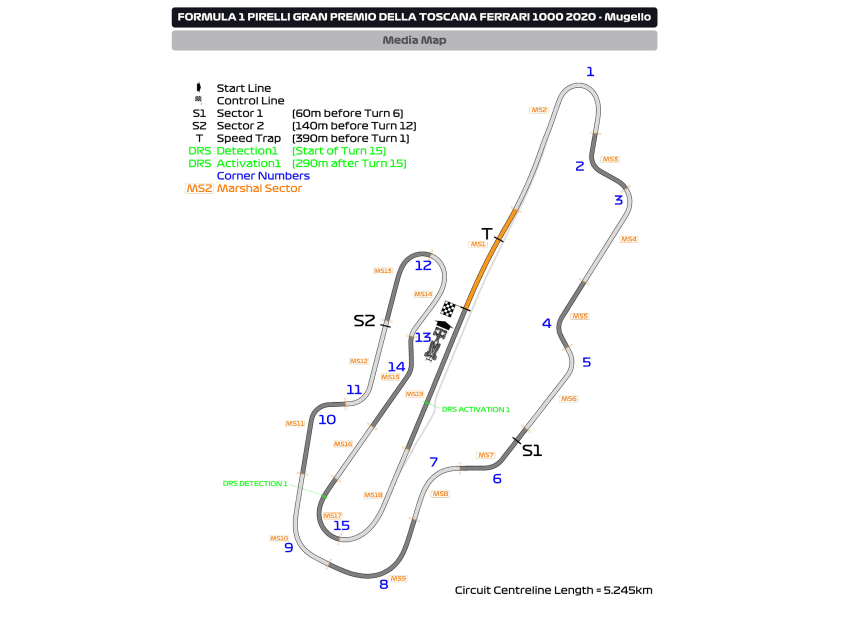 The FIA released details of the F1 Tuscan GP DRS zone at Mugello as Mercedes paints its safety car to red, with Mark Webber joining the SRX series.

There is more to a track in modern F1 circuit than what is seen straight up on television, especially with regards to the DRS zones, which has become crucial in modern racing. For majority of the tracks on the calendar, it fairly the same year-on-year.

But with F1 visiting Mugello circuit for the first time for the Tuscan GP, the FIA had to release a brand new track map, something which all of the teams and the drivers will have to learn. One major learning is the DRS zone as alluded to.

Unlike the other tracks, Mugello – which was added onto the calendar to compensate for rounds lost due to the COVID-19 pandemic and which is the 72nd venue raced at since the championship’s inception – will have just the sole DRS zone as opposed to the two.

The sole DRS zone will be detected upon entry into the final corner, and activated some 290 meters off of the exit of the very same corner. The activation point comes after the pit lane entrance, which deviates from the track shortly after the exit of Turn 15.

Additionally, the Tuscan GP will be of 59 laps, where the total distance is 309.497 km. Interestingly, the FIA did not name the four F1 stewards for the grand prix, which normally they do along with the race preview.

Also revealed by Mercedes that their AMG GTR safety car will, for this race only, be painted red, to commemorate Ferrari as they embark on their 1000th GP, which is likely to be a tumultuous affair for the Italian team – in a nice gesture from the F1 rivals.

“The Tuscan Grand Prix will also be the 1000th F1 race for Ferrari, marking the long racing tradition of this great Italian brand,” said Toto Wolff. “We will honour this achievement with a Mercedes-AMG Safety Car in Ferrari red – our nod to a racing history that brought us some of the greatest moments in Formula One.

“The men and women of Maranello have a proud history to celebrate and we’re paying respect to those celebrations this weekend.” A photo of the red luxury car, to be driven by Bernd Maylander, had surfaced, as some joked it is the red car most likely to be leading the field at some point during Sunday’s Tuscan GP, poking fun at Ferrari’s persistent struggles.

Outside of the main F1 circus, meanwhile, nine-time Grand Prix winner Webber has joined the American SRX series, founded by Tony Stewart. The series – dubbed as pure racing championship – is to run six races in the summer of 2021, which is to host its competitions on a range of circuits, from dirt tracks to ovals, all with one car.

For its diversity, as well as the series’ star-studded line-up that includes former IndyCar talents Helio Castroneves, Tony Kanaan, Paul Tracy, and even Willy T. Ribbs, as well as NASCAR alumns Stewart and Bobby Labonte, and now Webber, the series has become popular as fans await the first race.