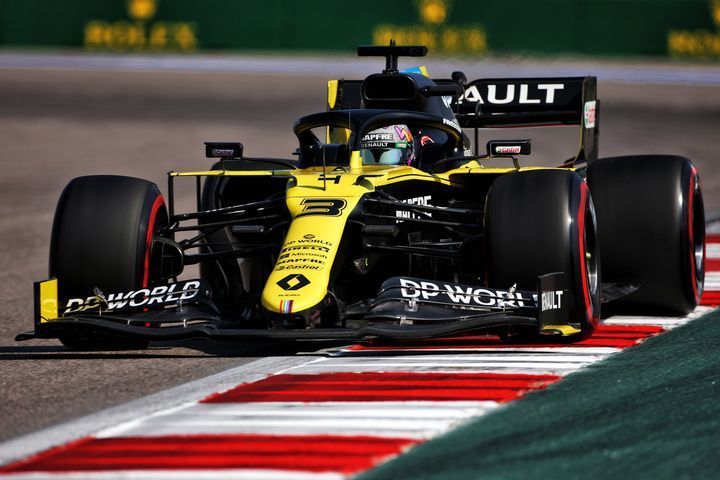 Always one to flex his muscles at the Sochi Autodrom, Mercedes’ Valtteri Bottas was proudly displaying an advantage over the rest of the field on Friday’s practice running for the F1 Russian GP. The Finn secured P1 in both sessions, in what was a continuation of form from years prior.

Even in FP2, when his teammate Lewis Hamilton can traditionally be expected to find the advantage, Bottas held him off, and that too by a considerable margin of over two tenths of a second. Despite his control over the timesheets, the 31-year-old expressed that difficult conditions and some difficulty with traction prohibited him from posting what he considers to be an unhampered lap.

“There’s definitely more to come but overall, it was a positive first day of running,” said Bottas. “Conditions were quite tricky out there and that’s why there were so many drivers making mistakes. There were a few interruptions and that meant we were a bit limited with running, and I also had a big lock-up, which destroyed a set of tyres. Second practice was better, and we managed a lot of laps, but I still didn’t quite get all the sectors right.

“The first two sectors felt really good, but the car was a bit too nervous in sector three. I was doing some rally-style drifting at times, which probably isn’t the fastest way around, so there’s still a lot of time to find. But we’re in good shape and I’m sure we can make improvements,” he said.

After a desperately poor showing in FP1 that saw him finish P19, albeit one that was followed by a P2 in FP2, Hamilton was not thrilled with his day, the Brit explaining that a monstrous lock-up early in the day forced him onto a set of undesirable F1 tyres. “The car has been performing really well here, but it wasn’t the smoothest day for me, so there’s work to do tonight both on the driving side and set-up wise,” he said.

“The day didn’t start very well, as first practice was pretty poor. I had a lock-up at Turn 2 on the Soft tyre and then when I went onto the Hard compound, I completely destroyed them, so FP1 was scrapped. The second session was a lot better, but I wasn’t able to put all the sectors together so it’s still a work in progress: I was a bit down in sectors one and two, but sector three was nice. The grip levels today were pretty low and that made things tricky out here, with a lot of sliding around.”

Staggeringly, the car trailing Mercedes was not one of the Red Bull variety, nor was it a Racing Point or a McLaren. Rather, it was a Renault, and specifically, that of Daniel Ricciardo. A distant second in FP1, the Australian trailed Bottas with superb pace in the morning. This form continued into the afternoon, albeit the gap grew, and with Hamilton in the mix, he was demoted to third.

Nonetheless, it was a result good enough to startle close competitors, and a sign of uncharacteristic form for Ricciardo at Sochi — a track with which his pace has not always shone through. “We keep on setting the time sheets alight on Friday, so it’s nice to see us high up again,” he said. “It’s a circuit I’ve not had too much success or confidence on before, so it definitely gives me a boost. I learnt a lot and showed strong pace in every run.

“I think it’ll be a lot closer especially between us and the teams that are about two to three tenths behind, so I think qualifying will be tightly contested. But I draw a lot of confidence from today and we’ll look to string it all together for the rest of the F1 weekend.” His teammate Esteban Ocon failed to replicate such pace, but was within earshot of Ricciardo, some five tenths down the road at most all times.

Nonetheless, the Frenchman considered it a productive day, and one during which potential was demonstrated, even if set-up is not yet in the ‘sweet spot’. At Red Bull, the day was a disappointing one, though their poor pace didn’t carry as much shock value as Renault’s competitiveness. Both drivers admitted that Sochi has seldom delivered the team success, after the team’s leading driver, Max Verstappen, managed only P3 in FP1, and P7 in FP2.

The Dutchman explained that there was likely more pace on the table for the latter session, but still conceded that they will have to work relentlessly to be able to fight at the forefront of the grid come Saturday’s Qualifying session. “In general we know that this track is not the best for us but we have been trying different downforce levels in both sessions to see what the best option is,” he said.

“I think we could have done a bit better in FP2 but we tested a lot of things on the car. Some things worked and some didn’t but now we have some good ideas. I think qualifying is going to be tough and I am not sure if we can be in the top three but in the race we look a bit more competitive which I am happy about. Renault also look competitive but we have to look at ourselves and make sure we make the right trade-off for downforce levels and have a stable car.

“I know qualifying will be tight and there is still a bit of work to do to make sure we can finish on the podium, but I think we will be in the fight.” Verstappen’s teammate Alexander Albon, meanwhile, explained that their ever-present lack of pace at Sochi has become accentuated by the extent to which the mid-field has grown in competitiveness. The Thai driver also stressed that the car feels composed on-track, and even if lap times might suggest other wise.

For McLaren, Friday was similarly turbulent. In FP1, Carlos Sainz crashed whilst sporting a new aerodynamic package, the Spaniard being forced to sit out of the remainder of that session by virtue of damage sustained to his MCL35’s rear end. His team having repaired the car, he went out for FP2 and delivered a successful session. This strong end to the day led the Ferrari F1 driver to-be to say that it was a productive and insightful day.

“Despite losing much of FP1, I think it’s been a productive Friday with an intense programme in the afternoon,” said Sainz. “Thanks to the mechanics for fixing the car on time for FP2. We completed the tests we needed and the car balance looks closer to the rest of the season so far, which is a good sign after our struggles at Mugello. We seem to be back in the mix, but we’ll have to wait until tomorrow to see what we can do in quali.”

Lando Norris, meanwhile, labelled his Friday a tricky one, as – while he did not lose track time due to a crash, stoppages and incidents elsewhere meant he could get little done in the morning. Racing Point were one of few teams to enjoy a quiet day, their driver Sergio Perez displaying good pace throughout the day, and his teammate Lance Stroll replicating this in the morning, albeit the Canadian’s pace dropped off when FP2 came around.

“It was a positive day and the car was feeling good,” Perez proudly declared. “We’ll go away tonight and look over the data as usual, but I think the car is in a pretty good place already. It was a really hot day out there, so I’m a bit sweaty too! I was surprised at the temperature, and it’ll be interesting to see how that affects the weekend ahead.

“I think it was clear to see that there’s going to be a close battle for the top positions in F1 qualifying – Red Bull, McLaren and Renault are also looking strong. We were able to put in some good laps and improve throughout the day.” Stroll added that a high lap count throughout the day should pay dividends later on as they collect data on the upgrades that they ran at Mugello. The 21-year-old also said that they have all the makings of a good result.

Over at Ferrari, Charles Leclerc stated that his day was one during which he struggled, though he also said that their pace was better than initially expected. Elaborating on this seemingly contradictory claim, the Monegasque explained that the F1 car’s balance is off, as its set-up is not yet in the right place. “We struggled quite a bit, but our lap times were better than we expected,” he said.

“The main thing we have to focus on is the balance, because I think there’s room to improve both in terms of performance and driveability. At this track, it is a completely different situation from qualifying to the race and this makes it very difficult to find the right setup.” His teammate Sebastian Vettel stating in contrast that they are in a better position now than they have been in past races.

At AlphaTauri, F1 Italian GP race winner Pierre Gasly had an unremarkable day, as the Frenchman wrote off a P10 in FP1 on account of the fact that the session was repeatedly interrupted. He considered FP2 a more productive session, and assuredly stated that he expects to be in the fight for Q3. Homeboy Daniil Kvyat added that balance was off, but conceded that this is part of the process on Fridays.

Of Alfa Romeo, both drivers Kimi Raikkonen and Antonio Giovinazzi claimed that interruptions in FP1 severely hurt their efforts, the former divulging that the car of the Italian team is behaving, and predicting a tight F1 Qualifying battle. In his own right, the latter added that his Qualifying runs were unrepresentative of his real potential.

The other Ferrari powered team, Haas, struggled especially at the Russian F1 circuit. In spite of this, the American team’s Kevin Magnussen said that things on his side of the garage are better than they were at Mugello a fortnight ago, with Romain Grojean – Magnussen’s teammate – adding that qualifying runs on Friday didn’t show promise after he spun in the midst of the day’s running.

Williams showed improved pace Friday, but George Russell made clear that their intention was to find a set-up that allowed for good pace in both qualifying and the race, rather than to make headlines with blistering laps. Nicholas Latifi also offered insight into what led to his FP1 crash, and how the car felt in FP2, when he was more comfortable in the cockpit.

As usual, F1 also released details of the COVID-19 testing, where between September 18 and September 24, they performed a total of 3,256 tests. From among those, they recorded the most number of positive cases with seven in all.

While one of them was already known to be F1 presenter Will Buxton, who did not travel Russia, the identity of the other six is unknown, but it is unlikely anyone from the teams. With these seven and previous eight, they have had 15 positive cases in all since 2020 start.