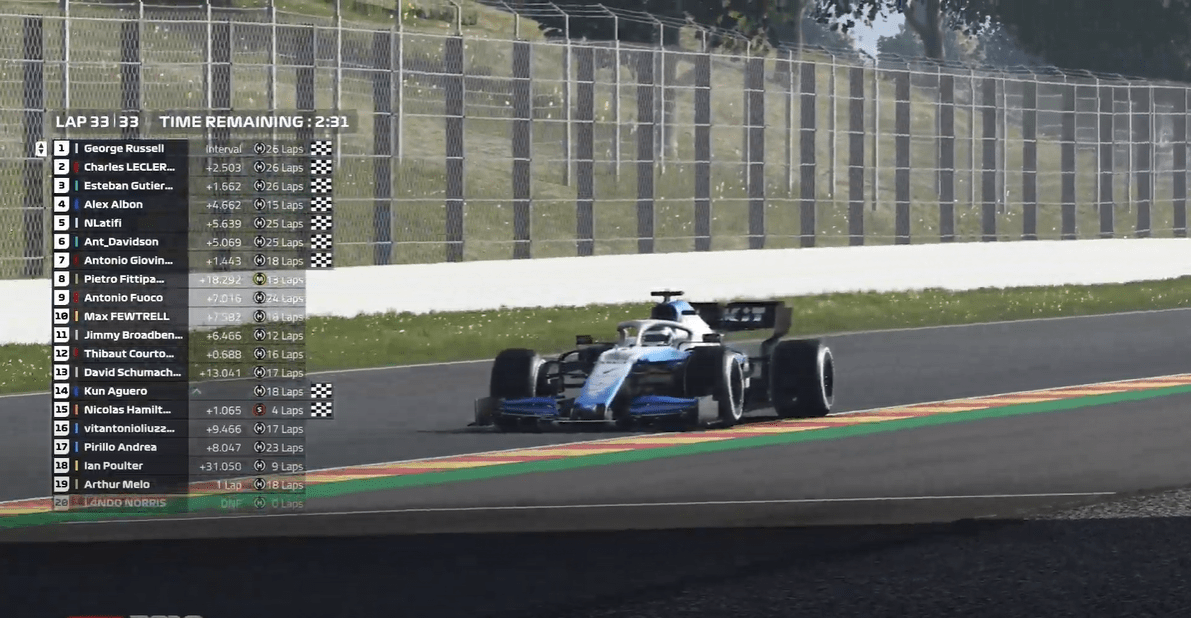 The F1 Virtual Grand Prix (Virtual GP) was back for the Spanish round held at Circuit de Catalunya-Barcelona with George Russell winning for first time.

The Virtual GP returned for the fourth time for the Spanish round, which was held at the Barcelona circuit on the F1 2019 game. There were some changes in the driver line-up too with the current grid of drivers down to six but they had a former racer in.

Ferrari opted for Antonio Fuoco as Mercedes roped in Anthony Davidson with Max Fewtrell coming in at Renault. While Lewis Hamilton said he wouldn’t play, his younger brother Nicolas signed up with McLaren to make his Virtual GP debut.

Among the footballers, Thibaut Courtois switched to Alfa Romeo with Ian Poulter returning at Renault, as Sergio Aguero made his debut for Red Bull along with Arthur Melo at Haas as AlphaTauri brought in Youtuber Andrea Pirillo.

It was close to be a disaster for Norris again as after his initial quick lap, his internet went off but he still ended up in eighth as up front, Russell took pole in a dominating form from Gutierrez and Leclerc, while Albon was down in fifth.

It was a clean start from all at the front but Russell dropped to fifth as Gutierrez took the lead from Leclerc, Albon and Latifi. It was not for long as the Monegasque made a superb move to take the lead with the Thai racer following suit in passing the Mexican.

It looked like settling down but Albon went for an early stop to gain track position. Norris, meanwhile, retired from the race with his love affair with Virtual GP continuing as Russell started to come back into the race behind Leclerc in the fight for lead.

The tussle between Russell and Leclerc was supreme as they went back and forth for multiple laps with the Brit having a three-second time penalty, it put the Monegasque in a better position. Albon, meanwhile, got his strategy wrong with two stops.

The Thai racer also got a time penalty which left him in fourth as Russell took his first F1 Virtual GP win in Spain after Leclerc got the same penalty. The Monegasque ended up second again with Gutierrez completing the Top 3 positions.

Latifi did well in fifth with Davidson in sixth ahead of Giovinazzi – who did not have any internet issues this time. The rest of the Top 10 had Fittipaldi in eighth, Fuoco ninth and Fewtrell 10th. Below, you can find the link of the Virtual GP:

In the first of the F2/F3 races in Round 2 at Barcelona had Arthur Leclerc start on pole position. The Prema driver, though, lost his lead to Campos’ Jack Aitken after the first pit sequence. After the second pit sequence, he was well on the way to pulling off a recovery drive when his car broke down.

This allowed UNI-Virtuosi Racing’s Guanyu Zhou to run away with the win, as he finished ahead of Lirim Zendell (Trident), Oliver Rowland (DAMS), Norman Nato (Carlin), and Felipe Drugovich (MP Motorsport). The Chinese racer did have a fight with Leclerc.

After this, Leclerc had a chance to salvage the day with the five-lap reverse-grid race. In this, Louis Deletraz (Charouz) started on pole, and stayed out in front for much of the event, excluding the last lap, when he was overtaken by Nato, who ultimately won.

Deletraz held onto second, fending off Aitken as Zhou was fourth. Leclerc failed to forge his way through the field in the same way his competitors did, and this led to him finishing fifth. Here’s where you can re-watch: https://www.youtube.com/watch?v=6ZV9pp7jzvU

Slotting in between the F2/F3 races and the F1 virtual GP was the pro exhibition race. In qualifying, Alfa Romeo’s Bari Boroumand took pole, but in the race, he had no answers for Red Bull Racing’s Rasmuthen, who took the win, with Boroumand second, and Nicolas Lounge (Renault) third. Fourth place was Bereznay for Alfa Romeo, and fifth was Alvaro Carreton.

Here’s how Round 4 of F1 Dutch Virtual GP