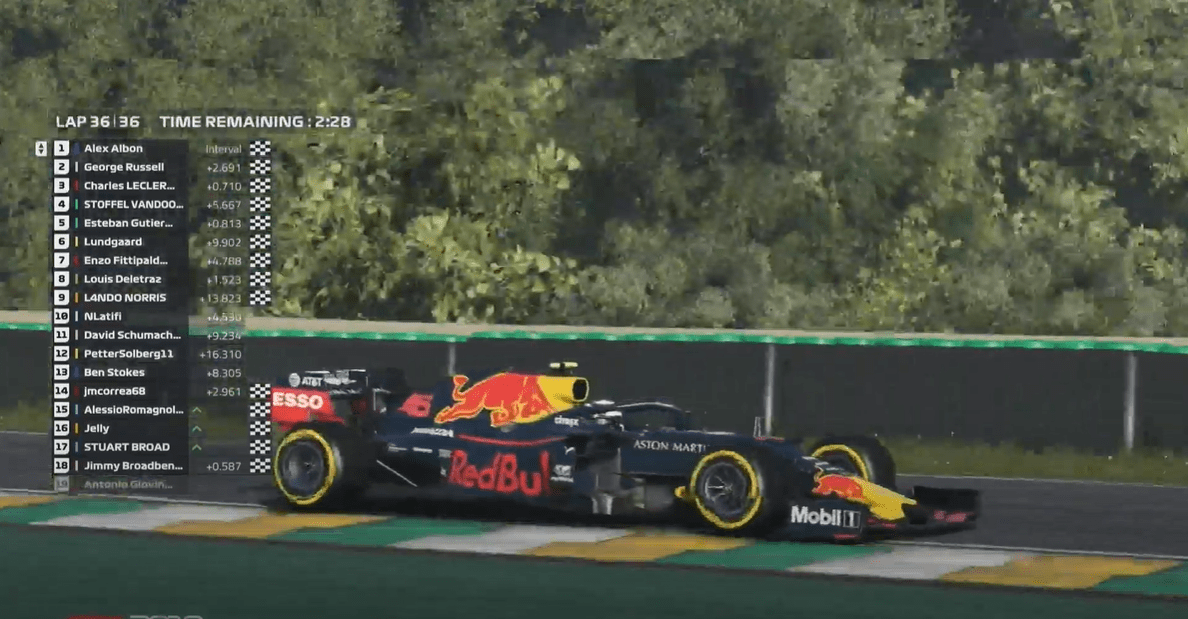 The F1 Virtual Grand Prix (Virtual GP) was back for the Dutch round held Brazil’s Interlagos with Alexander Albon winning for first time.

The Virtual GP returned for the fourth time for the Dutch round, which was held at Interlagos as the F1 2019 game did not have Zandvoort. There were some changes in the driver line-up too with the current grid of drivers down to six.

Christian Lundgaard (Renault), meanwhile, returned after missing China as he had Petter Solberg as his teammate. English cricketer Ben Stokes returned at Red Bull with Stuart Broad at AlphaTauri, which had footballer Alessio Romagnoli alongside.

Racing Point had David Schumacher signed in to make his F1 Virtual GP debut, with Ferrari fielding Enzo Fittipaldi. The qualifying saw Vandoorne break the chain to take pole as Russell was second from Fittipaldi as Leclerc was only sixth in the end.

It was disaster for Norris again as he missed qualifying due to issues but started from last with a drive-through penalty. The start of F1 Dutch Virtual GP was messy with Vandoorne spinning, which allowed Albon to lead from Russell and Giovinazzi.

A tussle between Giovinazzi and Russell allowed Leclerc to get by to be second as he pressed on behind Albon. The duo exchanged places throughout the race as a different strategy gave the Thai racer an advantage over the Monegasque.

Russell steadied on third after a crash involving Giovinazzi and Latifi put the Italian out of the session with the Canadian going back of the grid. Vandoorne got the better of Gutierrez to be fourth as Norris fought back inside the Top 10 after multiple stops.

The fight at the front continued to change lap after lap with both Leclerc and Albon leaving no quarters despite being on different tyres. The Thai racer eventually got the lead to win the F1 Dutch Virtual GP with the Monegasque ending up second on the road.

A penalty for Leclerc saw him drop behind Russell, who was second as Vandoorne got the better of Gutierrez to be fourth with Lundgaard sixth ahead of Fittipaldi, Deletraz, Latifi and Norris in the Top 10 – with multiple drivers having penalties.

Here’s where you can watch it: https://www.youtube.com/watch?v=kPLwo2EKfrU

In the brand-new F2 Virtual Racing, it was pole-sitter Arther Leclerc who won the feature race at Bahrain International Circuit in his Prema, as Oliver Rowland (DAMS) and Liam Lawson (Campos) rounded out the Top 3 positions with Callum Ilott (UNI-Virtuosi) fourth and Jack Aitken fifth his his Campos.

Behind, Louis Deletraz finished sixth in his Charouz car, Nato Norman (Carlin) came one position behind him and Felipe Drugovich (MP Motorsport) crossed the line eighth. In ninth was Antonio Fuoco in his Carlin with Top 10 rounded out by Lirim Zendeli (Trident).

The sprint race, once again, saw Leclerc take the win from eighth in a Top 8 reverse, as pole-sitter Drugovich was unable to convert his pole to a win. In second was Deletraz, who was followed by Nato to round out the Top 3 positions.

Rowland once again had a strong finishing position of fourth, as he was trailed by Frederik Vesti, while Ilott finished sixth, with his teammate Luca Ghiotto in seventh. Eighth, ninth, and tenth were Liam Lawson, Olli Caldwell, and Theo Pourchaire.

Here’s where you can watch it: https://www.youtube.com/watch?v=NxnZLAOL4oE

Also on the ever-expanding list of officially-sanctioned esports races was F1’s Pro Exhibition race, which gives professional esports drivers a chance to shine. Here, Dani Bereznay took pole position in his Alfa Romeo, however it didn’t go his way in the race, which had the podium occupied by the following drivers: Marcel Kiefer (Red Bull), Lucas Blakely (Racing Point), and Alvaro Carreton (Williams). Bereznay finished outside the top three in fourth, ahead of Joni Tormala in his Red Bull.

Here’s how Round 3 of F1 China Virtual GP