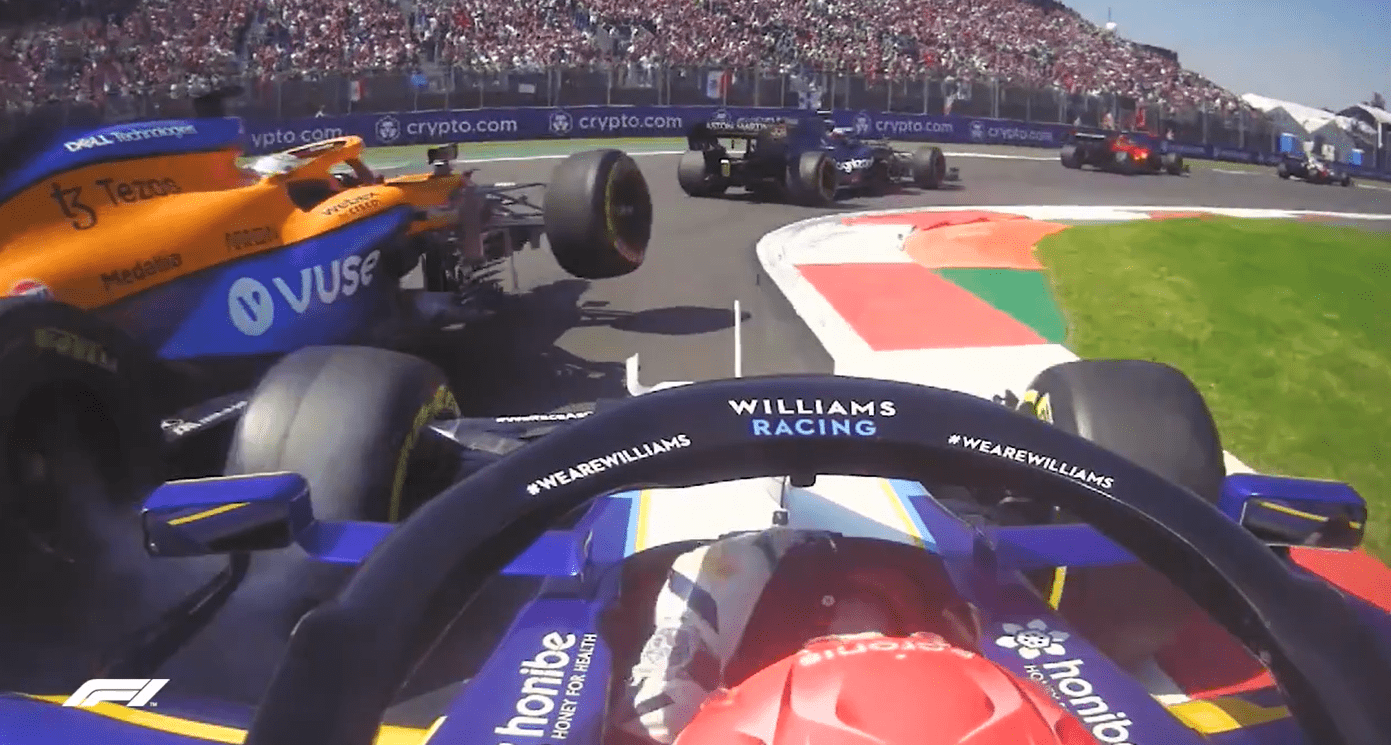 George Russell, Daniel Ricciardo and Kimi Raikkonen also had a collision as the two talk of F1 Mexico GP along with frustrated Antonio Giovinazzi.

While the fight continued on at the front, around the Top 10, there were three drivers who had mixed fortunes and as it turned out they garnered just four points between them. It was a day of frustration particularly for Russell and Giovinazzi.

For Williams’ Russell, the Belgian GP and other success earlier in the season now must seem like a distant memory. It’s several races since they have been in the points. It was great start in F1 Mexico GP where he jumped from 16th to 9th.

But it wasn’t for long as he dropped back in the race. His jump from behind to the Top 10 didn’t come easy as an onboard video from F1 showcased his tangle with McLaren’s Daniel Ricciardo, who was going along slowly after losing his front wing.

Russell and Ricciardo touched at the right-hander with Alfa Romeo’s Raikkonen on the outside of the Australian. Another video on social media showcased the McLaren moving into the Finn after getting the tap from the Williams driver.

Fortunately, all the three could continue on as Raikkonen got the better of the trio in the points. For Russell, he had an amusing issue with his drinks bottle (a la Perez at COTA) after he mistakenly pulled the plug on his bottle and was left with none to drink.

“I made it a little bit more tricky because under the Safety Car, I peered over the cockpit to check the front wing and in doing so, pulled my drinks tube out,” said Russell to written media. “So I lost the drinks tube on the first lap, so I was a bit thirsty. I think Checo was making a big deal out of in Austin (joke).

“I got up to P9, but we had absolutely no pace. Probably our toughest race of the year. Sometimes like that when we have to do a lot of management, the car doesn’t react or come alive as it does when you’re at max attack. It’s something we need to try and improve because races like this, where management is key, the car just feels pretty lazy and slow to react, doesn’t feel racey,” summed up Russell.

Meanwhile for Raikkonen, it was a good run to eighth, his equal best result of the season.  It was a good calculating race with a smart strategy. The bump with Ricciardo didn’t deter as a good consistent afternoon got him to double figures for the season. Also, Alfa Romeo are 12 behind Williams, game on in the fight for eighth in the Constructors battle.

“It was nice to get points and bring a reward to the team,” said Raikkonen. “We always try to do our best, every time we get to a race, and today things worked out well for us. P8 is probably the best we could do, we had good pace and we could keep up with the cars around us. Passing Russell at the beginning was crucial for our race, then the biggest challenge was to keep the tyres alive until the end. We can be satisfied about this result.”

For teammate Giovinazzi, it was a third race in a row, he would finish one place out of the points. A great pity as he ran sixth in the opening laps after a solid start. But while Raikkonen’s strategy worked, his did not. Pitting early, which can help of course, he went back out into traffic behind Ricciardo and Valtteri Bottas.

That allowed not just Raikkonen but also Sebastian Vettel and Fernando Alonso ahead, leaving Giovinazzi frustrated as he sarcastically thanked his team for the strategy they had adopted on the radio. One can feel his pain as he is currently fighting for his F1 future just now.

“I think if Kimi stayed P8 and I was P7 at that moment, so disappointing because the team didn’t score as much as possible. And this is really hard for myself as well. But it’s like this. It was just a great first lap, but in the end, it didn’t do anything for my end result. So good first lap, just disappointed with the situation.”