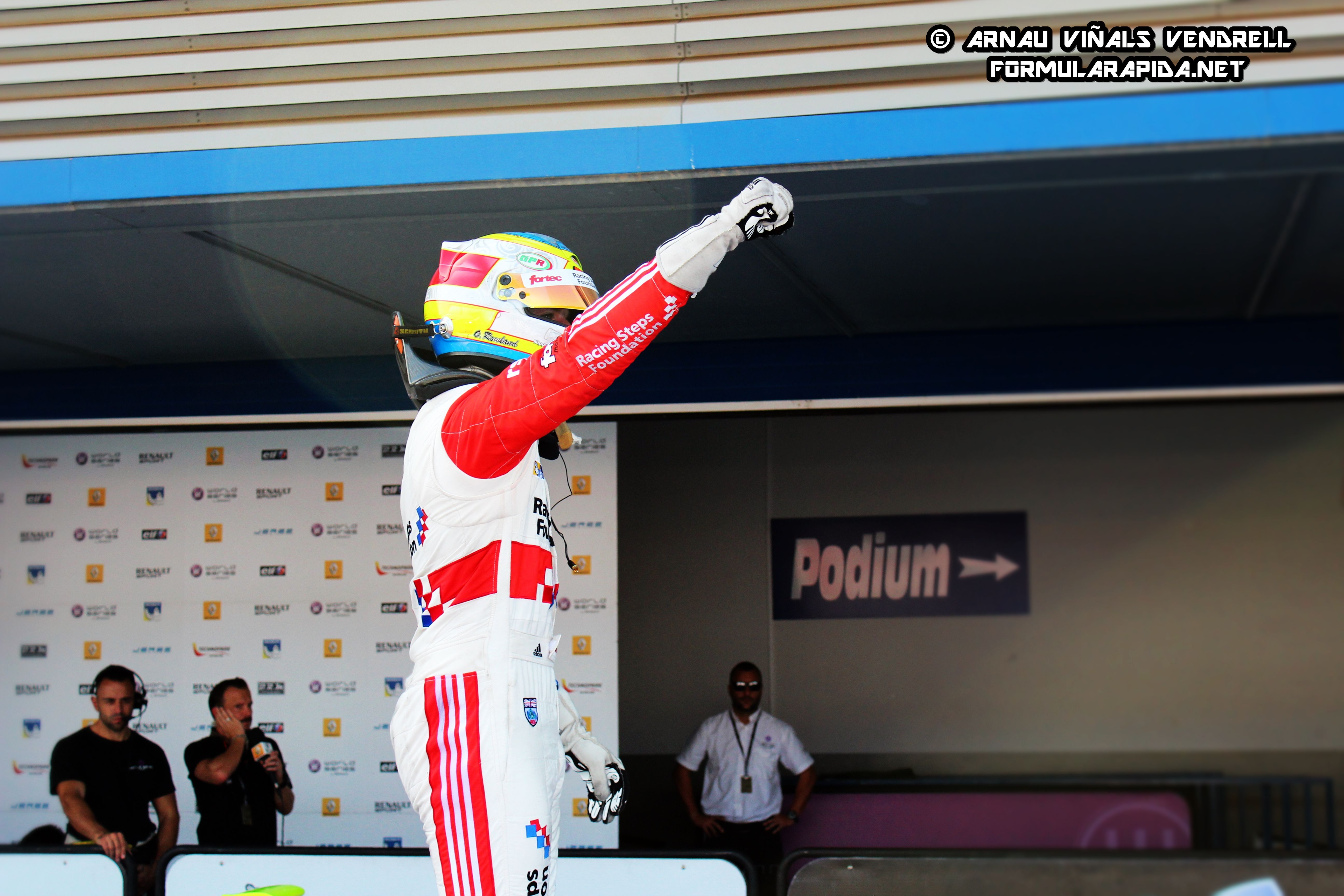 Oliver Rowland has maintained the lead throughout the race to claim victory with Latifi and Buller on the podium. Merhi had abandoned because of mechanical problems and with the fourth position Gasly he had missed subchampionship while Dams wins the team title by little.

This weekend has not been the best for Roberto Merhi. Having got the pole this morning with euphoria, he has been penalized and lost his position as its main competitor subchampionship, Pierre Gasly, be placed before him. The second local hero Carlos Sainz, also had a good weekend though despite win the drivers’ title yesterday, and today should fight from the fourteenth to the team that came first man not to take the title to Dams.

At the exit Gasly mated with Oliver Rowland but was unable to pass him on the outside and Rowland kept the lead. Merhi, in the second corner seeking to gain the post of French, but locking wheel on the outside of turn two the possibilities to overtake vanished and the first three places on the grid were intact.

Bad exit Visser, -yesterday third on the podium of rookies-, losing eight sites. At the end of the first round by the tail Mavlanov overtaking proved to Ghiotto, but played from the inside and it provoked a spin that left him out of the race and almost forcing race direction to take the safety car. One lap later, the Russian leave stuck in the gravel.

The first stop occurred on the fifth lap. Nato, Visser and Sørensen were those who did it first while Sainz was in the next lap, losing the position with Beitske and Visser. Meanwhile, Jaafar and Nato were penalized with a drive through penalty for skipping speed limit pit-lane to make his stop.

The cross was Roberto Merhi. In the seventh lap, the Castellon driver made ??his stop and his car seeped out what made ??him lose the third position in which he was and quite a lot of seconds. In the next lap Merhi, devastated, parked the car in the garage with a fire in the gearbox. Second race in Jerez and second abandoned for reasons that have nothing to do with him. This meant, if everything went well,he will lose the subchampionship with Gasly. Very unfortunate, as Merhi had come to Jerez as the only driver to take the championship lead with Carlos Sainz.

On lap 10 Tunjo and Stockinger were the drivers who had not yet stopped. Rowland had made a good stop while Gasly gone, problems, seven seconds slower than the British and thus lost the second position for the benefit of Buller and Latifi.

Stockinger made ??his stop on lap thirty and twenty minutes remaining. The Philippine leaving behind his teammate Matthieu Vaxivière, who was behind Tunjo. The Lotus driver had elongated the stop too.

Laine and Jaafar crashed while they were fighting for position at turn 9 and were standing on the gravel, forcing race direction to take the safety car failing career fifteen minutes while the stewards investigating the movement.

Resumption allow Latifi take second place Buller and invited Gasly inside the podium and also takes place almost to his teammate. Sirotkin approached the Arden Motorsport, more than two seconds slower than the leader. The drop in tire performance affected both Arden Motorsport and Gasly would be unable to catch Buller, is also a second and a half slower than Rowland and Latifi, who escaped in the lead.

Rowland came to goal setting the fastest first sector of the race on the last lap. Meanwhile, Pierre Gasly held the subchampionship finishing in fourth place and after abandoning of Merhi. This a brace in the championship by the Red Bull Junior Team, something that never happened.

Moreover, this Jerez race witch close championship of Formula Renault 3.5 Series this season with titles to Carlos Sainz Jr and his team, Dams closes. The team also held the title of the constructors’ championship, with the point of Nato in tenth place and “only” fifth place Sirotkin, Fortec is just three points if any taken the lead. Against all odds Pierre Gasly has regained subchampionship at the expense of Roberto Merhi, signing a doublet all the Red Bull Junior Team.