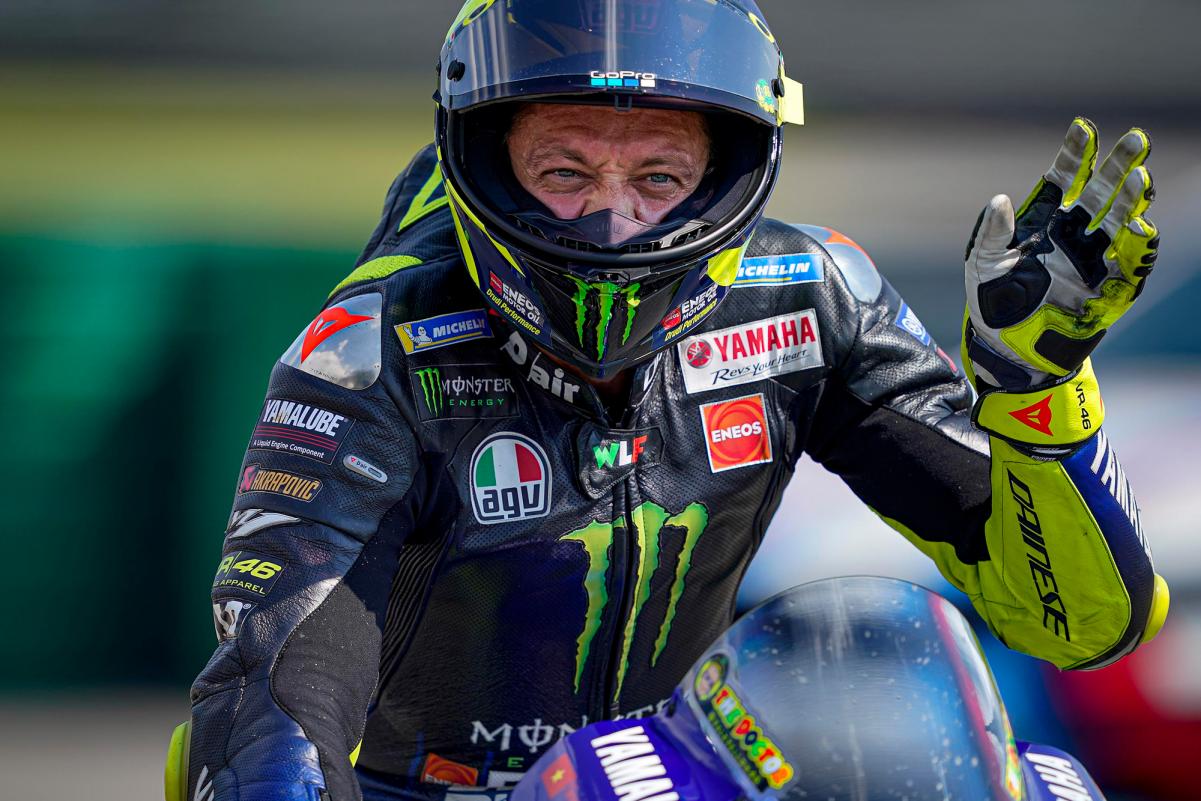 Valentino Rossi is cleared to travel to Valencia but needs second negative result but Iker Lecuona is sidelined due to COVID-19 quarantine.

Yamaha’s Rossi has been cleared to travel to Valencia for the European MotoGP weekend, but Tech 3 KTM’s Lecuona will miss the Valencia round due to forced quarantine despite not being positive for the COVID-19 virus. He joins Honda’s Marquez to be sidelined.

While the rider had a negative result on Tuesday, a positive COVID-19 result of his brother and assistant, has forced Lecuona to remain under quarantine as per Andorran legislation, which says any contact of a positive result has to remain in isolation for 10 days.

Tech 3 KTM confirmed that they will run the sole bike of Miguel Oliveira this weekend at Valencia. “We are very sad to announce that Iker Lecuona won’t be participating in the Gran Premio de Europa this weekend,” said team principal Herve Ponchral.

“So far, he’s been tested negative, but his brother, who is also his assistant is positive and therefore the Andorran authorities have called him ‘contact case’. He will have another test today, but even if it’s negative again, he’s got to stay in quarantine without moving from his home in Andorra for 10 days.

“The plan is to have another test next Wednesday and if this one is negative as well, he will be able to travel to Valencia and participate in Valencia II. This is very unfortunate, everybody was very careful. We are deeply sorry for that. We just hope that Iker will keep negative on the next tests and that we can see him next week here.

“Don’t forget, this is his home Grand Prix and him and the team were expecting so much from these two races, that it’s a real pity. But with how the world is at the moment, unfortunate things like this are happening. Again, we hope everything will be back to normal next week. Of course, he won’t be replaced for this event, therefore the whole Red Bull KTM Tech3 team will concentrate on our sole rider, Miguel Oliveira.”

As for Rossi, after a positive COVID-19 result on Tuesday, the Italian needed two negative results to be able to enter the paddock. He took another test on Wednesday, whose result returned negative, thereby allowing him to travel to Valencia for the MotoGP weekend.

He will do so overnight but to enter the paddock, he will need a second negative result. He is due to test on Friday and should he test positive, Yamaha will field WSBK racer Garrett Gerloff alongside Maverick Vinales to be the fourth rider for the Japanese manufacturer.

“Today (Thursday 5th November), Valentino Rossi has taken a PCR test and the result came back negative for the Covid-19 virus. As per the Italian law, the Yamaha rider is now allowed to end his self-isolation and take part in everyday society again. Rossi will take this opportunity to fly to Valencia, Spain, this evening.

Tomorrow (Friday 6th November), he will do a second PCR test and if the result is negative again, he will be able to reunite with the Monster Energy Yamaha MotoGP team and take part in this weekend’s Gran Premio de Europa. Should Rossi test positive tomorrow, then standby replacement rider Garrett Gerloff will take his place.”

UPDATE: Yamaha noted that Rossi is in Valencia and has undergone his second PCR test. The result is awaited but he will miss Friday running still, which means Gerloff will ride for them in FP1 and FP2. Once the Italian has a negative result, he will ride in FP3 then.

“Monster Energy Yamaha MotoGP announce that Garrett Gerloff will take part in the today’s MotoGP sessions of the European GP held in Valencia, Spain, while waiting for the result of the PCR test that Valentino Rossi did this morning, that will be revealed this evening. Should the Italian test negative again, he will take part in this weekend’s Gran Premio de Europa from tomorrow’s FP3 onwards,” read the statement.

UPDATE 2: Yamaha confirmed second negative test for Rossi and noted that the Italian will retake his #46 from FP3 onward.