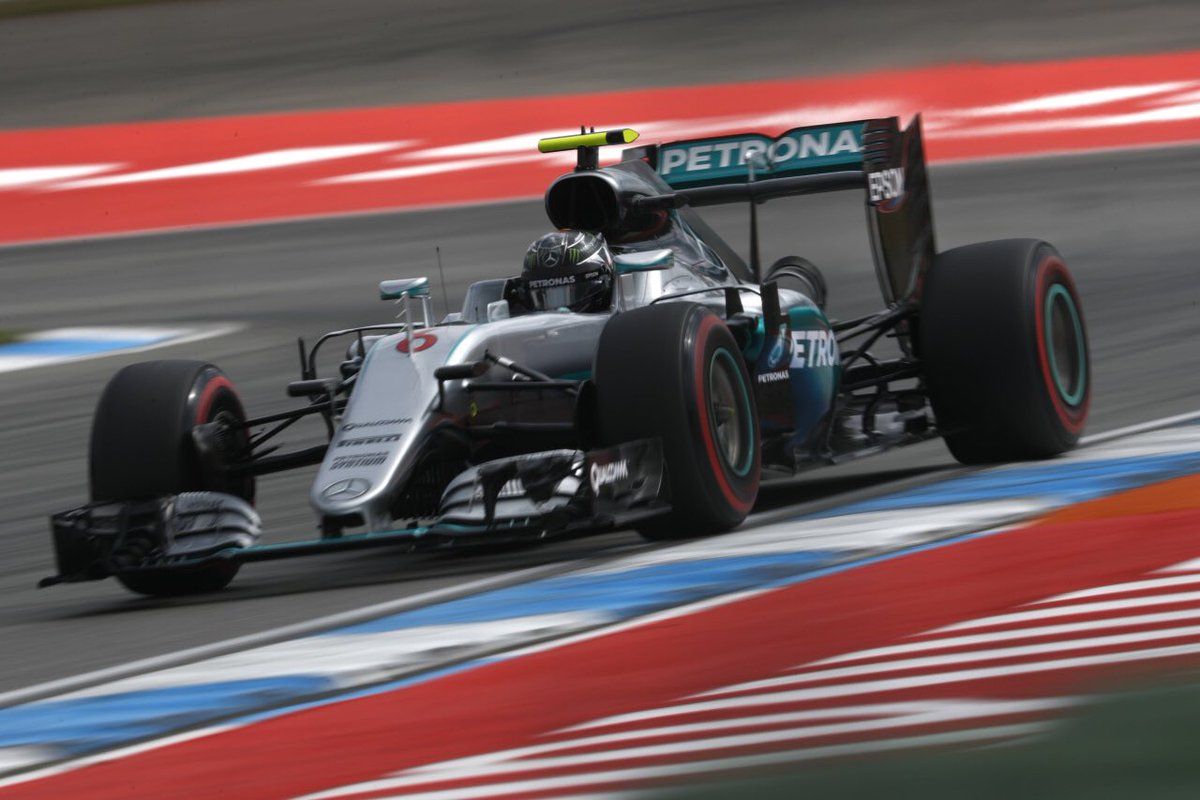 Nico Rosberg has made the fastest time in the Qualifying session of the German GP after having dominated the three free practice sessions of the weekend. Hamilton will start tomorrow’s race from the second position. Ricciardo and Verstappen will start from the second row, followed by the Ferrari drivers Räikkönen and Vettel.

The first teams to set a lap time in Q1 were the Manor and Haas, using the super-soft tyres. Only Mercedes’s drivers chose the soft tyres, which allowed Hamilton to set a 1.15.2. Rosberg got the second best time, 0.2 from his team-mate. The next four places were occupied by Ricciardo, Räikkönen, Verstappen and Vettel. Red Bull and Ferrari drivers had used the super-soft.

After a hard battle to avoid the knockout zone, the six drivers who would not compete in the second qualifying session were: Magnussen, Wehrlein, Kvyat, Haryanto, Nasr and Ericsson.

Rosberg and Hamilton were the first drivers to leave the pit-lane in Q2 with the super-soft tyres this time. The Brit got a 1.14.748, which was a little less than a tenth of a second quicker than the German driver. Verstappen got the third fastest time, 0.3 from Hamilton. His team-mate, Ricciardo, was 0.8 from the lead in the fourth position. The Australian lost his place to Räikkönen. Sainz, Palmer, the McLaren and Haas were in trouble.

The Mercedes, Red Bull and Kimi did not get out for a second flying lap. The following drivers got knocked-out from fighting for the pole in the Q3: Gutiérrez, Button, Sainz, Alonso, Grosjean and Palmer. Alonso said to his team that he had been blocked by a Ferrari, and he also went wide in turn 12.

During the first flying lap in Q3, after having made the record in sectors 1 and 2, Rosberg decided to go to the pits owing to an electric failure. Hamilton got the best time (1.14.486), followed by the Red Bulls, Ferraris and Force Indias.

Rosberg made his only flying lap before everybody else had left the pits. He improved Hamilton’s pole time by one tenth of a second. Lewis did not manage to go quicker than Nico, so he had to reluctantly accept a second position. Ricciardo ended third, followed by Verstappen, Räikkönen and Vettel. Top10 was closed by: Hulkenberg, Bottas, Pérez and Massa.