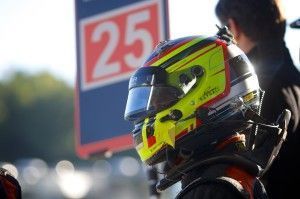 Sean Rayhall has won the second race weekend of the Indy Lights Series in the circuit “road course” the Indianapolis Motor Speedway. Rayhall has led throughout the race, and he is accompanied on the podium RC Enerson and Max Chilton.

On leaving, Ed Jones suffered a spin at turn 1 and this allowed Sean Rayhall placed first, and also did much to move positions making yesterday’s winner, Jack Harvey get into second place, while stood Serralles third.

After four laps the safety car appeared on track because of the abandonment of Spencer Pigot. After two laps we returned to have green flag, Serralles exceeded Harvey for second and Chilton Piedrahita moved to sixth place, Jones also had to come from behind and was right in the eighth.

Chilton was going up and getting beat Kyle Kaiser room to stand and go to capture RC Enerson in the fight for the podium. The ex-Formula 1 pilot managed to finish on the podium itself, but because of engine problems that Jack Harvey ran second, yet he was able to finish fifth.