Home Single-Seaters Indycar Rahal gets a new victory in Detroit 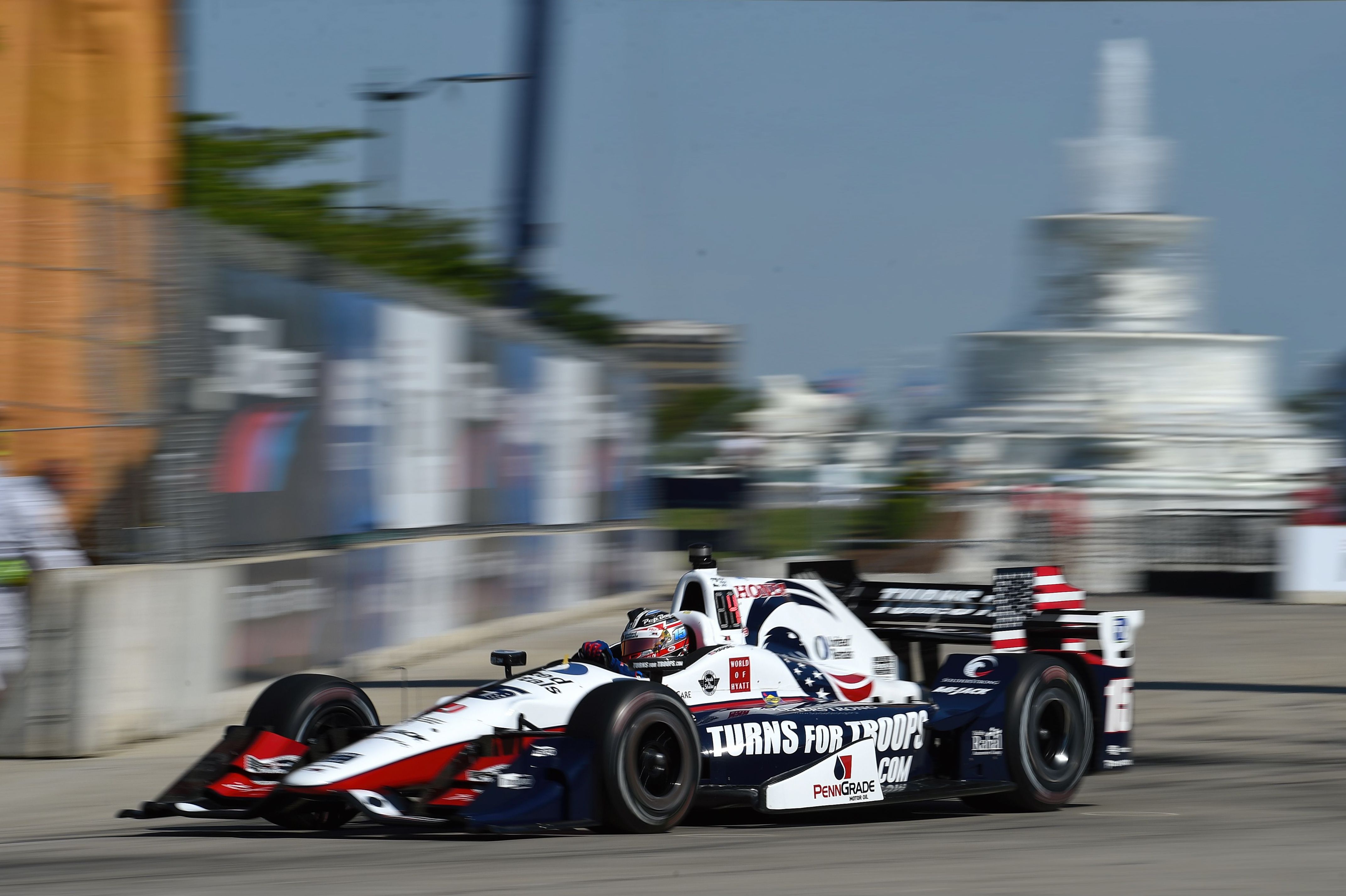 Just like yesterday, the second race of Detroit has shone more by the strategic dilemma than by the action on track. However, a red flag 3 laps from the end has provided some uncertainty in a final sprint in which Graham Rahal has managed to win, followed by Josef Newgarden and Will Power.

Takuma Sato quickly opened a gap of more than a second over his immediate rivals. Behind them, there was more change of positions and some contact, but no major incident. JR Hildebrand made his stop after the second lap, being the first to opt for an alternative strategy. In the lead, the first one to stop was James Hinchcliffe, who was seventh at the time.

In second place, Ryan Hunter-Reay was not very fast and, in lap 9, Graham Rahal, yesterday winner, overtook Andretti on the outside, with some contact included. The 2012 champion was very slow and Hélio Castroneves began to attack his position, but suffered a puncture by a slight touch with the front wing of the Andretti. This helped several drivers to approach Hunter-Reay, with Will Power fourth, threatening the position of #28. The Brazilian was able to reach the pits without abandoning or causing a yellow flag.

Hunter-Reay continued to lose positions (possibly because of some damage on the front wing). Power, Mikhail Aleshin, Simon Pagenaud and Alexander Rossi had overtaken him in just one lap. He had fallen to the seventh place and, at the end of the lap, he went into the pits, getting a new front wing.

On lap 16, Rahal was already behind Sato, but he could not reach him. Behind him, Pagenaud overtook Aleshin and took the fourth place. Power was also very strong and reached the fight for the leadership, which already had three drivers.

Sato and Power stopped in lap 23. The Australian came out of the pits very close to the Japanese, but there were two cars between them that helped the winner of the Indy 500, those of Josef Newgarden and Scott Dixon, but neither would be slow. Rahal stopped in the next lap and came out in the lead. Finally, Newgarden and Dixon went to the pits in lap 29. Rahal already had 8 seconds on Sato.

In lap 34, there was a contact between Hildebrand and Ed Jones, causing a puncture to the former and a broken front wing for the latter. Both were forced to go into the pits.

After a few quiet laps, Pagenaud and Rossi were, on lap 46, the first with the leader’s strategy to stop. Rahal, Sato and Power did it in the next lap and, this time, the Australian left the pits ahead of the Japanese, who saw his position attacked by Pagenaud when returning to track. Newgarden had returned to the lead, but stopped in lap 49. His strategy was not the best, but his good pace allowed him to go back in track in second place, between Rahal and Power.

The final phase of the race seemed very quiet, with Newgarden closing the gap. Jones had to retire the car, but he did not cause a yellow flag. However, James Hinchcliffe car broke down on lap 76, causing a yellow flag. During the yellow-flag period, Spencer Pigot broke his engine and retired. The smoke (and potential pouring of oil) was huge, thus the red flag was deployed. A final sprint to the limit was on its way.

After the break, all cars returned to the track and, with only two laps to go, the green flag was waved. Rahal was able to protect his position and there were no overtakes in the restart. Newgarden was not at all comfortable with the car and lost time with the leader. Power could not attempt overtaking.

Rahal completed his weekend in Detroit with two victories after another success with the strategy. Newgarden, despite not using the winning strategy, has been incredibly competitive and has managed to finished second. Power returns to the podium after two bad races. The Top 10 was completed by: Sato, Pagenaud, Dixon, Rossi, Charlie Kimball, Castroneves and Tony Kanaan.

The Double Grand Prix of Detroit ends with Rahal’s dominance. Dixon maintains the championship lead, with Castroneves second, 8 points down, and Sato third, 11 points down. After them, Pagenaud, Newgarden and Rahal are now fourth, fifth and sixth respectively, gradually closing the gap with the leaders. The next race will be the Texas 600, the third oval of the year on Saturday, June 10 (Saturday night to Sunday in Europe).