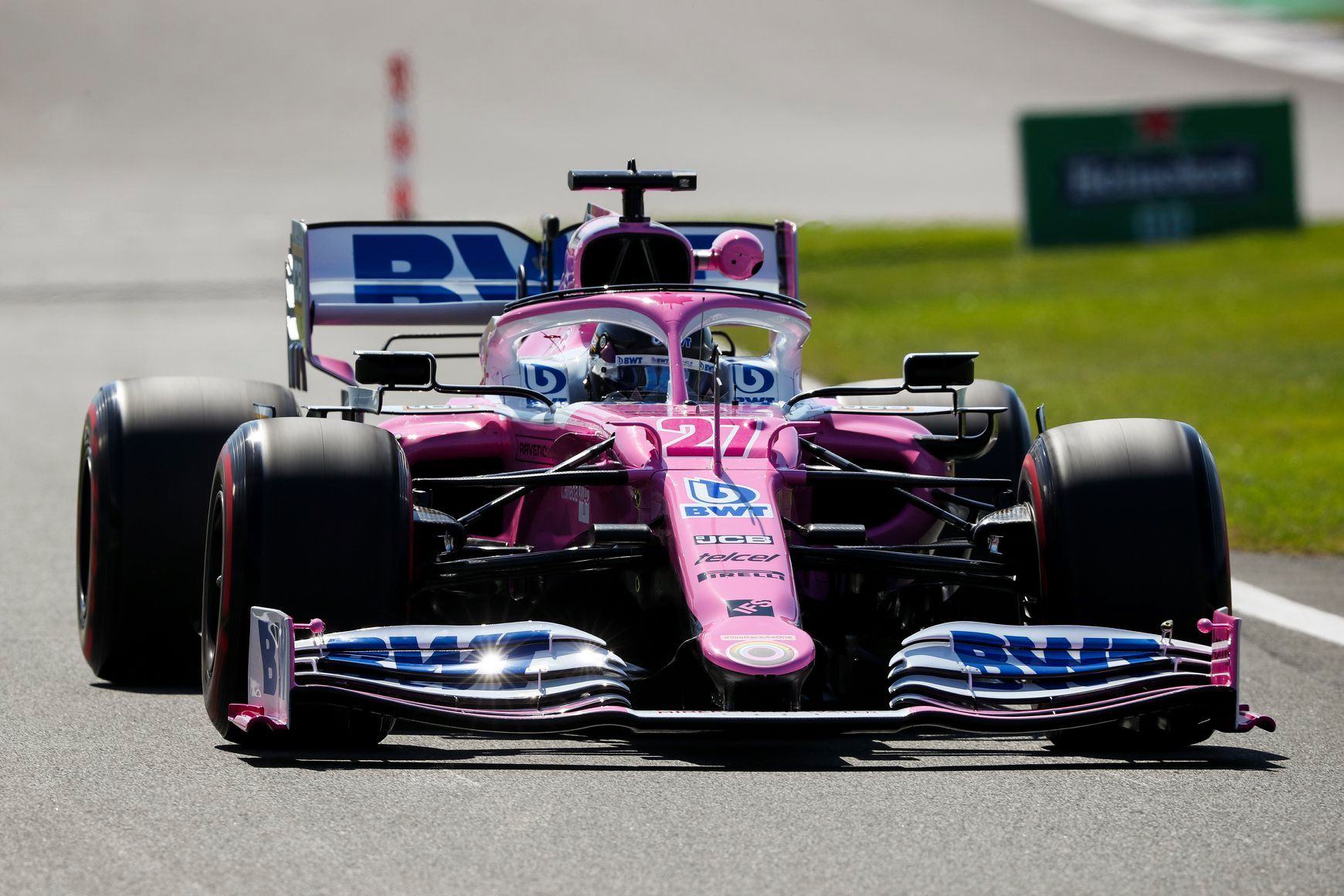 It has been a whirlwind time at Racing Point in the past few days after Perez was tested COVID-19 positive upon his arrival in the United Kingdom from Mexico, where he flew to see his injured mother. He has been ruled out of the F1 British GP as a result.

Racing Point had the option of Mercedes reserve Stoffel Vandoorne and Esteban Gutierrez but the Belgian is away in his Formula E duty as Szafnauer said that they did not opt for the Mexican due to the availability of Hulkenberg, who was in Germany then.

The German was preparing for a test at Nurburgring, where he is going to race in a Lamborghini in the ADAC GT Masters in two weeks time. Hulkenberg flew into the UK and went straight to Racing Point factory for urgent seat fit and simulator time.

He did well in the two practice sessions after he only got the nod to get in the paddock just minutes before FP1 when his COVID-19 test came as negative for the second time. Racing Point TP Szafnauer explained the whole Perez, Hulkenberg, Gutierrez thing and more.

Szafnauer:  “He’s asymptomatic, he was surprised that he tested positive, he couldn’t believe it, he said ‘there’s no way, there’s no symptoms, I feel completely fine.’ He travelled privately so he thought he took ample precautions, didn’t get on a commercial flight in between races so he was surprised.

“He’s OK, we’re going to check on him daily, send a doctor to him. He’s quarantining now, we just have to make sure the virus gets out of his system and he comes back racing. We’ve got no clauses in the contract where he’s got to ask permission to go back to his family.

“I think his family was in Mexico and it’s not a surprise that he went back to Mexico, that’s what he’s done forever while he’s been driving for us. We did, though, discuss how he was flying there and back and it was always by private flight so never commercially. There’s no issue with that. Regarding his contract, we don’t like to disclose the details of our contracts but I’ll take this opportunity to tell you that that option that you talk about expiring today (July 31) is not true, that’s not the case.”

Hiring Hulkenberg over Gutierrez, how it happened:

Szafnauer: “Hulkenberg is not our reserve driver so we thought about… well, when I started thinking about this when Checo’s first test was inconclusive and hoping that the next test was negative but you’ve got to hope for the best and plan for the worst so we started that planning and we did it in parallel with Hulkenberg and Esteban Gutierrez at the same time. We also have Stoffel Vandoorne but he couldn’t be here this weekend as he’s got a Formula E commitment so it was Esteban or Nico.

“We did it in parallel and our engineering team, after we discussed it, thought Nico would be more appropriate for our team because he knows us really well, he knows all the engineers, he knows our systems, our processes, he’s driven our simulator. It would be easy for him to get in the simulator again and also he has relevant experience from having driven in F1 last year, and we just needed somebody who could score points for us so we thought Nico would be the best guy for us.

“Hulkenberg had just landed in Germany. I think he was flying to Germany to do some kind of sports car test or something, I don’t know what category of racing, but he landed there and he said ‘yeah yeah, I just landed here, I’m going to do a test’ and I said ‘well, maybe you should jump in a F1 car’ and he said ‘yeah, absolutely.’ I think he spent an hour on the ground in Cologne to grab his boots and a helmet and I think the helmet he grabbed isn’t to spec anyway and then he flew into Birmingham so he landed here, I think 7 or 7.30 last night.”

Whether Hulkenberg will drive again next weekend:

Szafnauer: “So if it’s certain that he’s out for two then Nico will drive in both races but the reason for it is there’s a bit of uncertainty and we’re still not sure if it is seven or ten days. He tested positive on Wednesday and I believe – but I’m not 100 per cent sure – that on Wednesday the restriction set by England was seven days of quarantine, not ten.

“So I guess I’m still unsure. If it’s ten days, then Nico will drive both days, if it’s seven days, then it’s only one of the hurdles, the hurdle is that he’s got to have negative tests as well, so if the virus is still in his system and he tests positive then Nico again will be driving in the second Silverstone race.”

Szafnauer: “There are two members of staff that travelled with Checo, his PA and his physio. They’ve both tested negative but they’re isolating as well, for either seven or ten days and then there are three members of the team that did a simulator session with Checo so they didn’t really come into contact with him because in our simulator, the simulator is in one room and the control centre where they are at is in a totally separate room so we had the social distance required. We also wore masks as we always do and PPE as well.

“As a precaution, they then stayed at home and isolated until they got a negative test so we tested them, all three are negative as well. They tested again this morning, they’re at the factory now, working from the factory, they haven’t come into the paddock but my anticipation is that they will be negative again for their second test and then thereafter we’ll see if… we’ll make a decision on whether they can come in… whether they should come into the paddock. They’re negative and I’m a hundred per cent confident they don’t have the virus but you know, it’s belt and braces so we’re testing them twice.”

If Russell was not of the thought or not, Hulkenberg being reserve for future:

Szafnauer: “We ran George Russell before, we’ve tested him, he’s a very talented young man but he is contracted to Williams so we didn’t consider George. We considered drivers who aren’t currently under contract with F1 teams as well as the Mercedes reserves as we share them.

“The probability of us needing both reserves or them needing both reserves is close to zero, which is why we decided to share, so Stoffel was not available, Esteban was but so was Nico and so our choice was between Esteban and Nico. And as for having our own, maybe after these two races or so perhaps Nico will want to become our reserve. I’ll have to ask him.”

Szafnauer: “Hindsight’s a wonderful thing. There are many people that are in hotspots all around the world. We have a big contingent of our factory live in Northampton and you know Northampton was shut down as well. So our philosophy is we take all the precautions necessary in light of where we’re travelling and if we do take those precautions, I’m confident that we won’t get the virus. We just need to now forensically look back and try to ascertain how Checo became infected and make sure that we cover that off in the future.

“The code as it’s written now, in between the Austria races and in Hungary, we shouldn’t have left and gone outside which our drivers didn’t do, neither did our team personnel. For example, Racing Point had a rule that once we were in Hungary nobody could leave the hotel, even if you had a Schengen passport. Just we treated everybody the same including the drivers. But in between Hungary – because we had that weekend off – I think everybody went to wherever their families were.

“I think the Italian teams went back to Italy, probably the Swiss team went back to Switzerland, probably Pirelli went back to Italy and the drivers went to their home countries. In hindsight – like I said, hindsight’s a wonderful thing – perhaps we should look at that, change the code and say throughout the season, you stay within your bubble. I don’t know but that’s something for the FIA to consider.

“I read through the code a couple of times now and it is a living document, so they say, at the very beginning, from time to time, as we learn, this will change so perhaps that will change but I don’t think Checo did anything wrong going back to his family. He takes all the precautions. I think it’s no different to Ferrari going back to Italy, for example.”