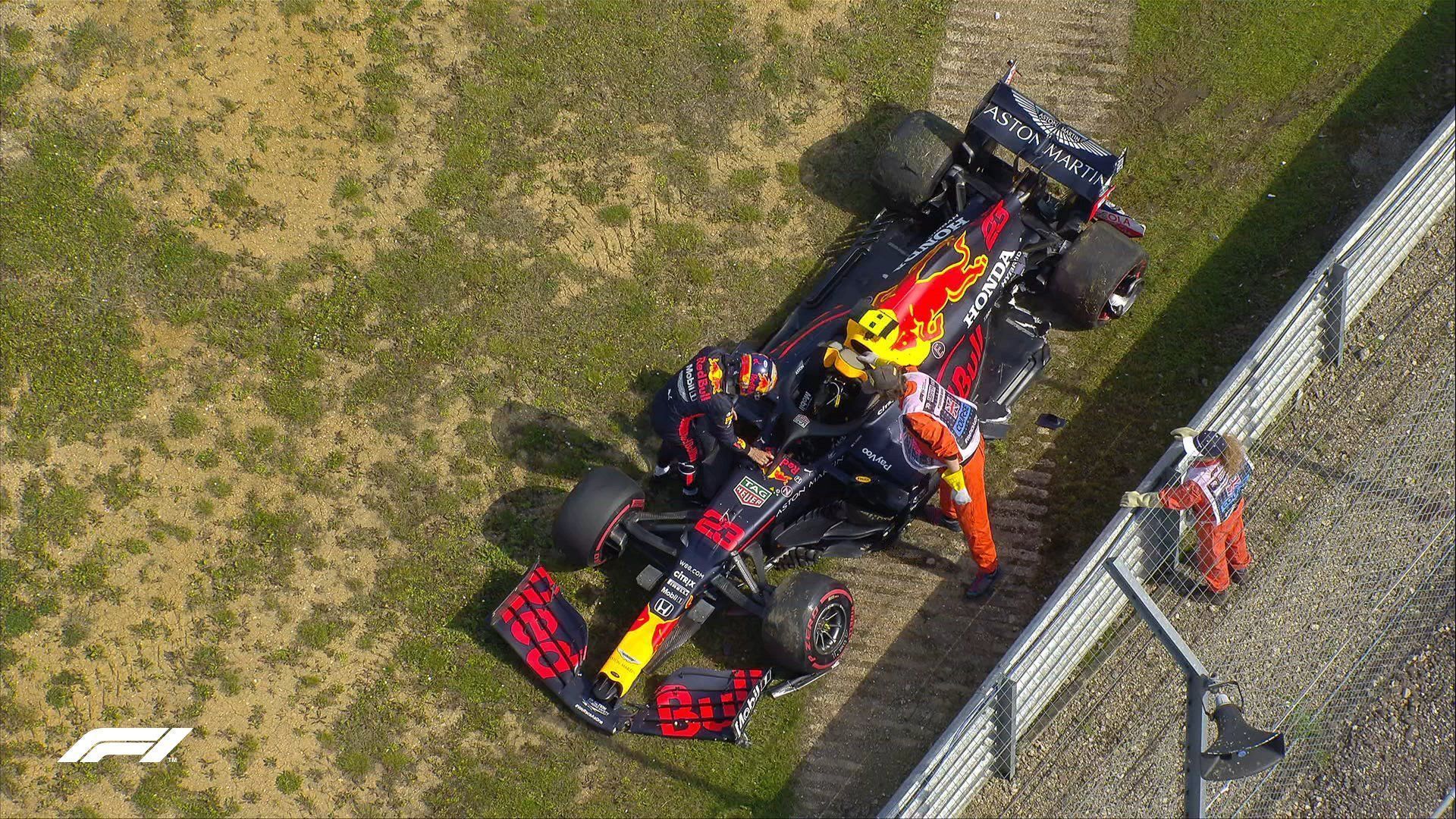 The British GP Friday F1 Talk had a lot of Nico Hulkenberg but Mercedes/Ferrari/Red Bull Racing looked at their performance with other on their upgrades.

For the first time in 2020 F1 season, the answer to the question of who is most on-form was truly empirically unverifiable on Friday at the British GP, as various teams looked to be fastest at different times of the day.

Throughout the day, though, Red Bull were certainly up there at the front, as Max Verstappen set the fastest time in FP1. In FP2, Alexander Albon was in second position, and looked on course to improve on this when he fell victim to the low grip – a bi-product of unusually high track temperatures.

He would hit the wall in what was a big shunt, and this would ultimately bring out red flags. After the practice F1 sessions, Albon picked apart his incident, adding on the teams upturn in performance after disappointing at Hungary, though he did predict that Mercedes are keeping pace in their pockets.

“There are a lot of positives to take despite the incident at the end of FP2,” said Albon. “I’m fine and it wasn’t that bad. The rear just went away quite quickly and I struggled to correct it. I thought I caught it and then I just got sent into a tank slapper. We’ll have a look at the data and see what happened there.

“As a team, though, I think we’ve definitely made a step. We expected worse  but the car feels good and it was hooked up straight away from the first lap in FP1. Obviously I’m pretty sure the Mercedes are hiding a lot so we’ll be watching them tomorrow but otherwise on our side the car feels more balanced and I think we have a better understanding of it.

“The wind and temperatures will be very different to what we’ve had, so it will be a little bit of a reset but it’s looking good so far.” Verstappen concurred his teammate as he felt the Red Bull F1 upgrades seemed better and the long runs were good too but like the Thai, he is wary of how Mercedes would be on Saturday and Sunday.

As expected, Mercedes were also very much at the front, with Lewis Hamilton setting the fastest lap of all drivers on the medium tyres in the morning, and Valtteri Bottas in third in FP3. The former complained of lacking balance, and this was even evident in his radio messages, some of which saw him express concerns about the soft tyres. He explained that the team will pore over the data to understand their struggles.

“It was quite a difficult day to be honest,” said Hamilton. “The balance didn’t feel quite right, and the wind made things really tricky out there. So, we’re going to work on it tonight and try to figure out why I haven’t been feeling as comfortable as I would like. It’s been a hard day of driving, but it’s not a disaster and what’s so great about this team is we continue to dive deep into the details – hopefully we’ll make some good changes overnight.

“It’s going to be cooler and the Red Bull and Racing Points look strong, so hopefully it’ll be close out there.” Bottas, meanwhile, stated that he was mostly comfortable in the car throughout the day despite the struggles for his teammate.

Uncomfortable in an entirely different way was Nico Hulkenberg at Racing Point, who was unhappy with the quality of his seat mold, which was done hastily last night after Sergio Perez tested positive for COVID-19 and he was decided on as the replacement.

The German had a rollercoaster of a journey to get to the F1 track, and spent much of the morning getting acquainted with the RP20. He put in a strong number of laps, and looking back at the eventful day, he was largely satisfied. “It’s been a really special last 24 hours,” said Hulkenberg.

“At 4.30 PM yesterday, I took the call from Otmar and got on the plane. I arrived at the factory and had my seat fit until 2 AM. I got in the simulator at 8 AM this morning and had some useful prep work. I want to thank the team for their amazing work to get me into the car, and the FIA for their help with the superlicence and turning it around so quickly.

“The main positive was that we completed our programme and that I completed plenty of laps. It was a jump into the deep end, but I was able to see the potential of the car – even if I feel like I could have got more out of the soft tyre. It’s been great to work with some old faces again and that’s been a help in getting up to speed too.

“I’m looking forward to working with everyone tonight to make sure we extract everything from the car.” His new teammate Lance Stroll understandably bested him in both sessions, where the Canadian was third and first, with Mercedes putting them up in strong pace.

Ferrari, on the other hand, had a mixed bag of a day, as Sebastian Vettel missed the majority of the running due to intercooler issue in FP1 and paddle in FP2. In the brief run, he struggled upon hitting the track, finishing only 18th. Teammate Charles Leclerc had promising results. After a stronger showing of pace for the team in Hungary, the Monegasque ran fifth and fourth in FP1 and FP2 respectively.

He was happy with their one-lap pace but expressed some concerns over their race pace. “It has been a reasonably good day as far as quali performance is concerned, but our race pace seems to be less strong,” said Leclerc. “In the long run the car was extremely hard to drive, balance wasn’t great and it was difficult not to make mistakes.

“Saturday and on Sunday, the temperature is going to be quite different and I believe we can still change quite a lot of things to see how to gain some race pace, probably by sacrificing some quali pace.” Looking at the other F1 teams, McLaren had upgrades on their MCL35, and spent much of the day testing the parts.

Carlos Sainz would later say the day was relatively positive, but that there remains work to do on their car, which felt somewhat off. He also suggests that they may not be so well-off as their results make it seem, as others – like Verstappen – were caught out by the red flag.

“It’s been an intense Friday, testing the new upgrades and having to adapt to the track conditions,” said Sainz. “The wind picked up and the temperature rose quite a lot from FP1 to FP2, meaning the track was trickier for the tyres and made the car more challenging to drive. I would say it’s been a positive first day, making improvements from FP1 to FP2, but the feeling with the car is not quite there yet.

“Our lap-time looks competitive, but some cars were caught out by the red flag, so we’ll have to wait to see where we really are.” Teammate Lando Norris had similar thoughts but his brake issues hampered his long run running and he will have to rely on Sainz’s data. Their close rival Renault dealt with inconsistency with Daniel Ricciardo, while Esteban Ocon found the tough conditions refreshing.

Even though Alfa Romeo Racing were high up in FP2 but their FP1 was quite the situation as both Kimi Raikkonen and Antonio Giovinazzi had spins, where the latter was investigated but let off with a warning after he drove into the pits leaving a trail of debris. The upgrades seemed promising as per the Finn but it will still be difficult for them.

AlphaTauri, meanwhile, were satisfied with the strides made with their AT01, which was sporting some new parts. Reliability seemed stronger for the F1 team, but Daniil Kvyat did change his gearbox, and has been hit with a penalty, while Pierre Gasly also had a change but will not have a penalty as he had a DNF in Hungarian GP.

At the back, the Haas F1 drivers reported good behavior from the team’s VF20, but Kevin Magnussen did express that they are not quite there when it comes to pace. Williams, meanwhile, had a tumultuous day. George Russell had difficulty behind the wheel in Silverstone’s many fast corners, while Nicholas Latifi had a very late spin after the chequered flag dropped in FP2 as both felt there is work to do.