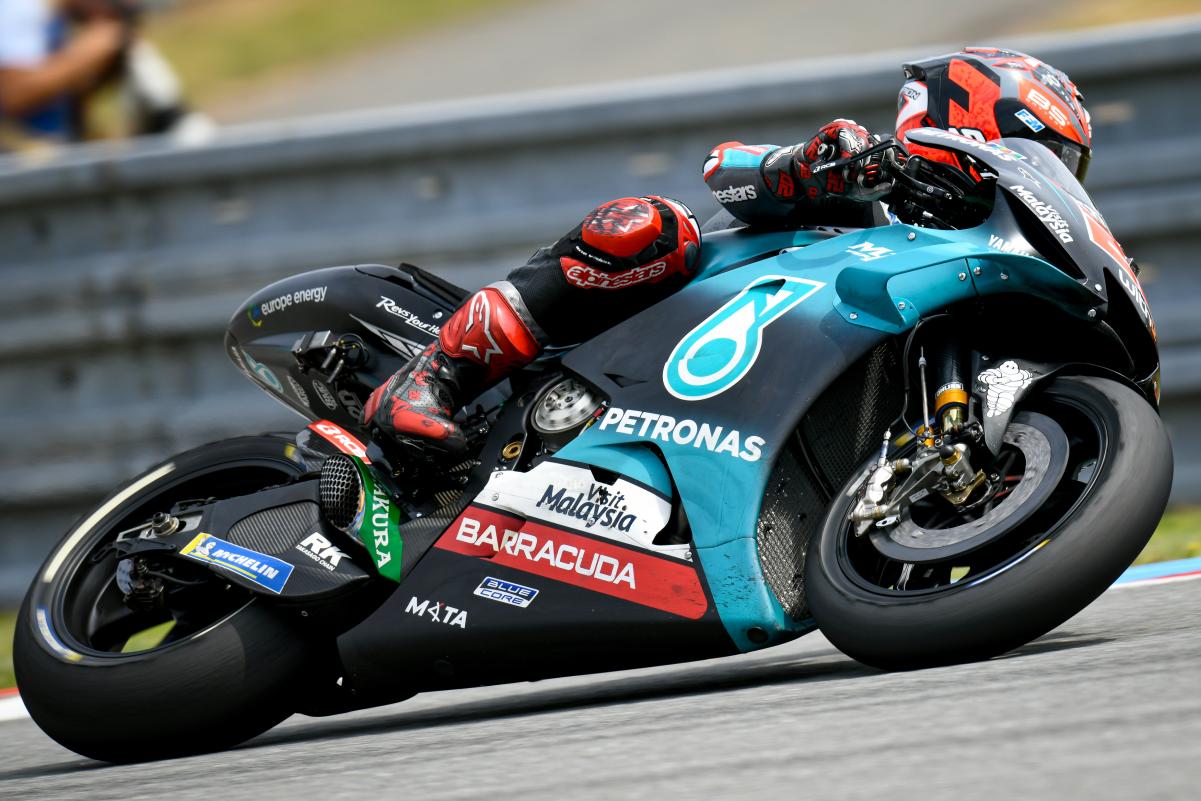 Petronas Yamaha SRT’s Fabio Quartararo was quickest in the Brno MotoGP test as Suzuki’s Joan Mir had in a big crash.

Quartararo ended up as the quickest in the one-day MotoGP test at Brno in Czech Republic with a best time of 1m55.616s, which was only 0.012s faster than factory Yamaha’s Maverick Vinales (1m55.628s), who did not run the 2020 prototype engine.

Meanwhile, Franco Morbidelli completed a Yamaha trio at the Top 3 with his best time of 1m55.755s as the Italian got some laps under his belt after his Lap 1 crash in Czech GP. While Quartararo did 78 laps as did Morbidelli, as Vinales had 74 to his name.

Suzuki’s Alex Rins was fourth with his time of 1m55.837s as he tried the new swingarm but teammate Mir had a late crash with 45 minutes to go at Turn 1, as his bike ended into the forest. He was air-lifted to the hospital for further checks.

Here’s what MotoGP said of the crash: “There was a high-speed crash for rookie Joan Mir with just under 45 minutes of the session remaining that brought out the Red Flags. Mir’s GSX-RR ended over the fence and into the forest at Turn 1 and as a precaution, the Spaniard was air-lifted to hospital for further checks.”

Honda’s Marc Marquez was eighth in the order after running second for most part of the day. He had three bikes at his disposal like Crutchlow to run as he set a 1m56.237s with 70 laps in all ahead of the lead Ducati of Pramac’s Francesco Bagnaia (1m56.248s).

Meanwhile, Honda’s reserve Stefan Bradl and Suzuki’s reserve Sylvain Guintoli did not have a go, as KTM test riders Dani Pedrosa and Mika Kallio are scheduled for a two-day private test at Brno on Tuesday and Wednesday.

UPDATE: Suzuki updated on Mir’s conditions, where he suffered a pulmonary contusion but with no further damage. The Japanese manufacturer added that he will be monitored over the next few days.

The statement read: “Joan Mir suffers high speed crash at Brno Test. Diagnosed at the circuit with a pulmonary contusion, a CT scan and checks at the hospital confirmed no further damage. Joan will need to be monitored over the next days while he rests and recovers. Send him your best wishes.”

MotoGP: Marquez opens second half with a dominant win in Czech GP