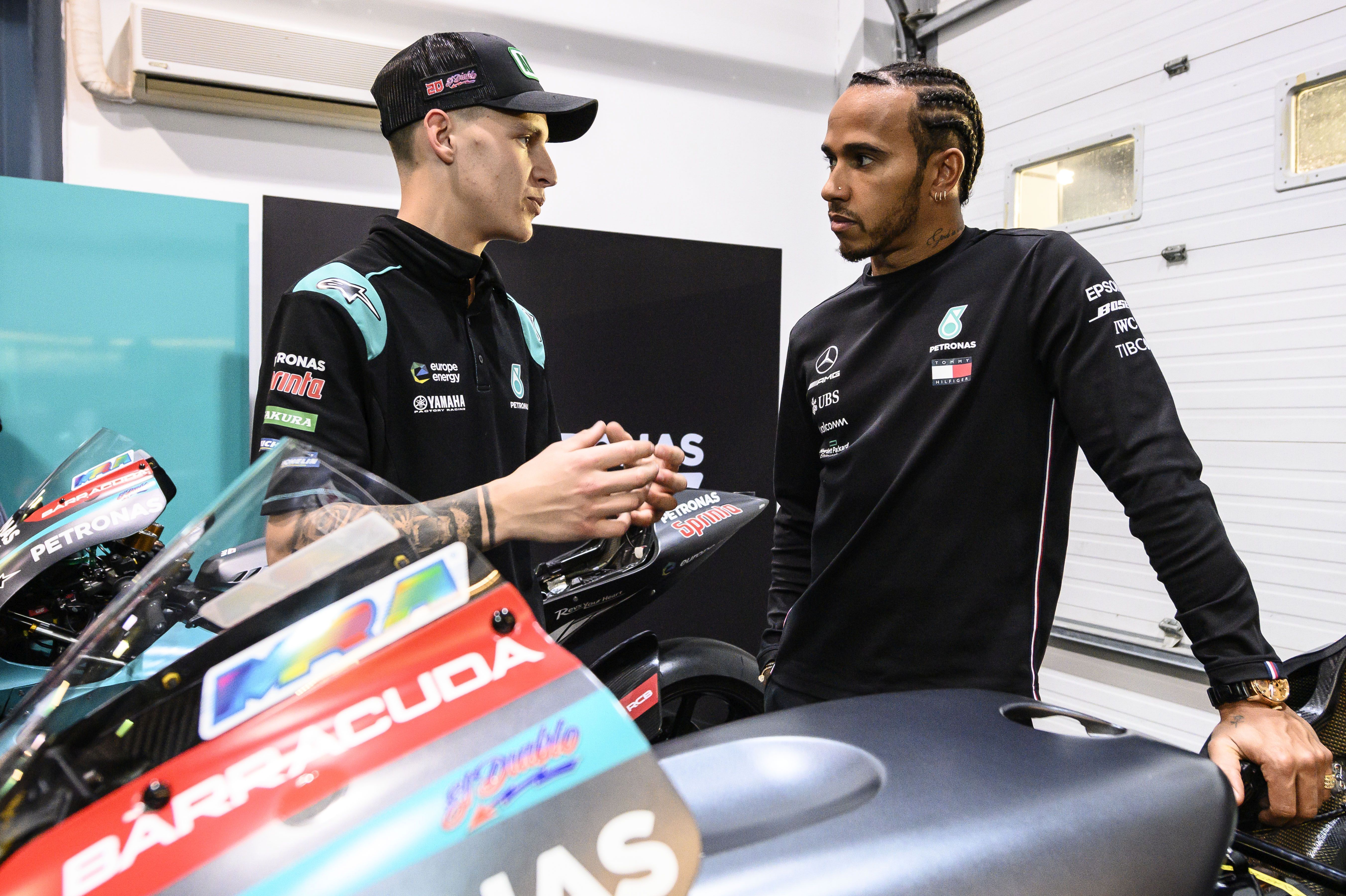 With Mercedes partner Petronas making its MotoGP debut in Qatar as Yamaha’s satellite outfit, the company flew down Hamilton to Losail International circuit on the Saturday as the F1 champion visited the track just in time for FP4 and qualifying sessions.

He was mostly present in the Petronas Yamaha SRT garage where he met the team’s riders Franco Morbidelli and Quartararo as Dorna CEO Carmelo Ezpeleta also paid a visit along with the key officials from Petronas and Sepang International circuit.

Hamilton took the opportunity to roam around the pitlane to see his good friend Yamaha’s Valentino Rossi – whom he met on Sunday when he went to the track again, but as a Monster Energy guest – and LCR Honda’s Cal Crutchlow.

He also went trackside as he discussed about the dream to one day ride the MotoGP bike. While we got Hamilton’s side of things, Quartararo has revealed what the British racer asked him during his meet with the French rider.

“It was a really nice moment,” said Quartararo. “Lewis is a big fan of MotoGP and he’s always dreaming of trying one. He asked me a lot of questions: on the electronics, on the rear brake that I have with my thumb.

“Then on what I say to my chief mechanic when I come back to the box, if I tell him what changes to make on the bike or if I just describe my feeling. Frankly, it was great to talk to him.” Post their chat, Hamilton, Quartararo and Morbidelli exchanged helmets as well.

On the racing side, the Frenchman had a rocketing but mixed MotoGP debut in Qatar when he qualified inside the Top 10. He had a solid chance to score points until he stalled on the grid and was forced to start from the pitlane.

Experienced team manager Wilco Zeelenberg took charge and advised Quartararo to stay calm in the moment. “It was the first time that I was on the grid surrounded by 22 other riders,” said the young Frenchman.

“I did not hear my engine and a result, the revs were a little too low, which is why I stalled. He [Zeelenberg] did not tell me much except ‘stay calm, stay calm’. He had to repeat it to me two or three times.

“He has loads of experience within MotoGP and he saw that my rear tyre was full of sand. In addition to that, the tyres had cooled, just like the brakes, so that’s also why he wanted me to stay calm.

“In my head, I was mad with rage, but I knew that I had to pay attention on the first laps. Given my pace, I think we could have finished in the top eight. That was a reasonable goal but with that being said, there are still many races ahead of us.

“We will inevitably gain more and more experience. Nevertheless, I remain satisfied with my first MotoGP race.” While Quartararo had a point of reference in Qatar due to the pre-season test but for the Argentina race, he will have to adapt quickly.