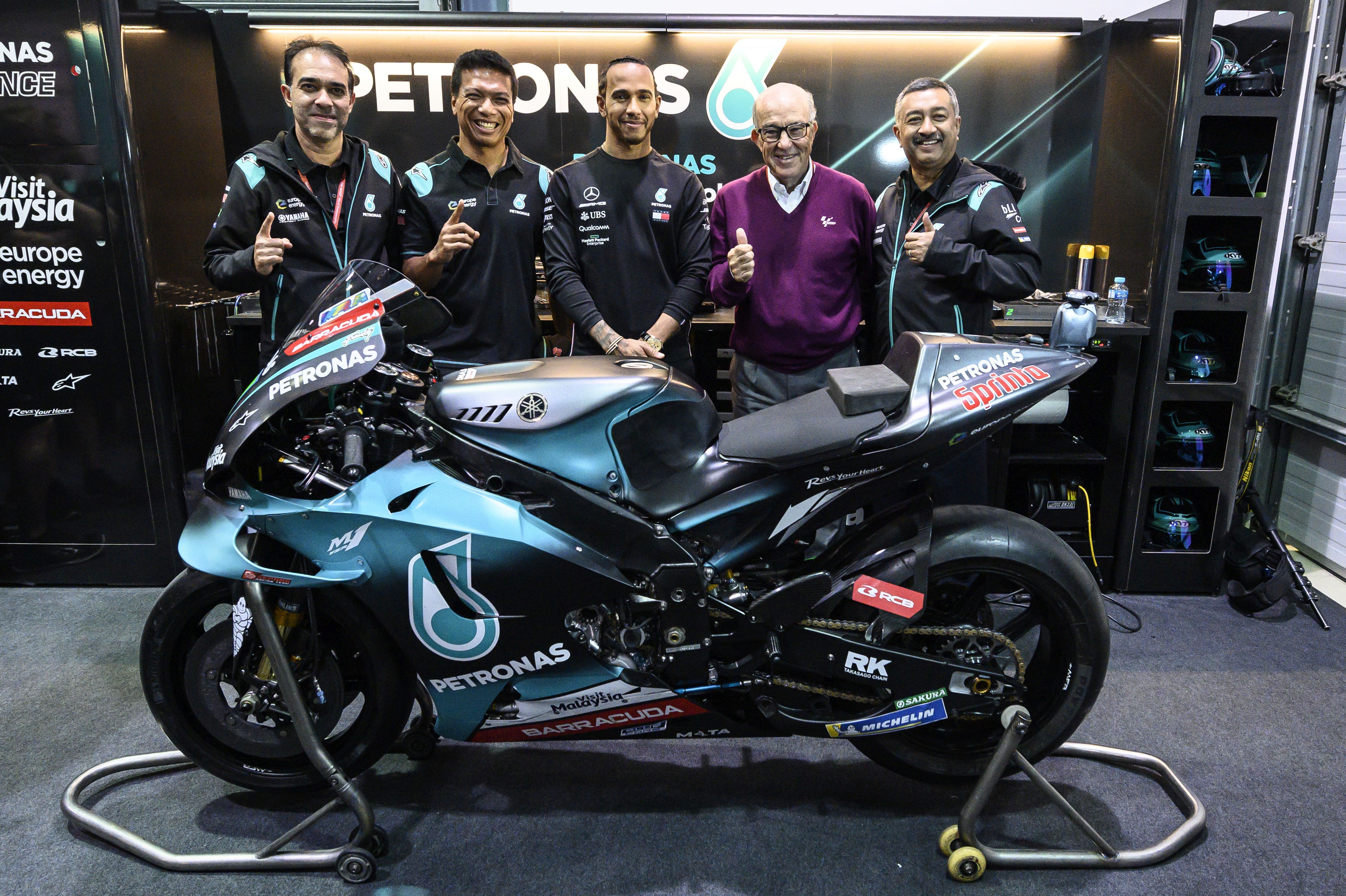 Reigning F1 champion Lewis Hamilton paid a visit to 2019 MotoGP season’s Round 1 in Qatar as a guest of Petronas in support of their new team.

With F1’s new season only a week away, Hamilton took a slight detour on his trip to Australia with half a day spent at Losail circuit for MotoGP’s first round of 2019. The Mercedes driver only had time to see the FP4 and the qualifying session.

He made full use of the short time though which included a chat and helmet swap with Petronas Yamaha SRT riders Franco Morbidelli and Fabio Quartararo as well as the team management and Dorna’s head Carmelo Ezpeleta.

In addition, Hamilton was spotted outside the garage of Yamaha’s Valentino Rossi and his friend LCR Honda’s Cal Crutchlow. He had a track side visit as well to see the bike’s performance on-track and also riders practicing their starts.

The British racer has time and again talked about his love for bikes in general and also MotoGP. Post the 2018 F1 season, he rode a Yamaha superbike at Jerez with World Superbike riders Michael van der Mark and Alex Lowes for two days.

The likeness for MotoGP is such that Hamilton did not shy away in admitting about the lack of overtakes in F1 which is one reason for his personal likeness towards two-wheel racing. “I think the feel of the riders is quite natural, the skill and quality is exceptional.

“I quite like the different categories and how the riders are coming up [in MotoGP]. Racing in Formula 1 is not particularly good [at the moment] and I am not a fan of it personally, in the sense of, it is hard to overtake.

“In Go Karts, you don’t have aerodynamics, you have lots of overtaking just like you have in MotoGP. Here you see riders are swapping and changing from lap to lap, that’s what racing is about and they ride on the knife edge which I love,” he told MotoGP.com.

Staying on the topic of F1 and MotoGP, Hamilton added: “There are massive differences, in the sense of, like in a Formula 1 car, we don’t have to worry about safety aspect anywhere near as much as they do on the bikes.

“When I rode a bike, it is so much free and quite a lot more dynamic, but in terms of understanding brake consistencies and lines, there is a lot of things common we have as riders and drivers. These bikes are a lot more fun, personally.”

Hamilton also recalled the time his love for bikes started which incidentally happened before he started Go Karting even. He admits that he wanted to ride bikes rather than race cars but his dad took him to Go Karts – which of course, he is grateful of now.

But he adds that the passion for bikes never left him still and the dream is to one day ride a MotoGP bike. “Yes, 100 percent that I am going to ride one of these. I am building up to it. I have only had two days on a bike on a track.

“Actually, the year before last year, I did one day somewhere else in Spain and that was just on a rental R1 bike. And then I bought a bike last December but only got two days. I need more days, personally.

“But yeah, eventually I’ll love to try MotoGP. That’s the dream. I am so busy that I am not able to come to many [MotoGP] races, so this partnership [between Mercedes and Petronas] has kind of helped me to be able to come this year.

“[But] I watch it [MotoGP] every weekend, even when I am in F1 grand prix weekend, I am jumping in and out of my meetings before and after qualifying to watch the MotoGP qualifying.” As alluded earlier, Hamilton won’t be staying for the Sunday’s race.

Meanwhile, like it has been for sometime, fresh reports suggests that both Petronas and Monster Energy are trying for Hamilton to have a F1 and MotoGP swap at some point in the future but it remains to be seen if they successfully manage to do so.