While the 2016 mercato had been rather quiet, Nico Rosberg’s retirement sounded like a bomb and completely reshuffled the 2017 grid. If you compare the grid for the 201­6 Australian Grand Prix and the 2017 one, only Ferrari have not changed their line-up.

Five drivers from last year are not returning this year. Apart from Rio Haryanto who left after the German Grand Prix, Nico Rosberg decided to retire from F1 racing and so did Jenson Button – although he is staying at McLaren as reserve and development driver. With Manor’s withdrawal, Esteban Gutiérrez and Felipe Nasr found themselves seatless after the Abu Dhabi Grand Prix. The Mexican is now committed into the Formula E championship but Felipe Nasr remains seatless as we speak. Retired in the first place, Felipe Massa has been called back to replace Valtteri Bottas who left Williams for Mercedes. It is the first year since 1994 that the reigning champion does not take part in the championship – Alain Prost had left Williams after his title in 1993.

With Jenson Button’s retirement, Fernando Alonso becomes the most experienced driver on the grid with 273 Grand Prix ahead of Kimi Räikkönen and Felipe Masa. Max Verstappen is no longer the youngest driver on the grid as Lance Stroll was born on October 28th 1998 and is one year younger than the Dutchman. Sebastian Vettel remains the most titled driver with 4 championships, ahead of Lewis Hamilton (3), Fernando Alonso (2) and Kimi Räikkönen (1).

Dominant since 2014, the German team has not shown any sign of weakness since pre-season testing despite Rosberg’s surprise announcement. Valtteri Bottas proved himself very fast by beating the track record in Barcelona in the first week. The Mercedes engine also proved great reliability with the record of mileage accomplished during winter testing. Mercedes should shine once again in Australia although Ferrari might be able to challenge them.

As always, no one can really judge Red Bull Racing’s performances just from pre-season testing. Furthermore, the RB13 looks way to quiet to have been thought by Adrian Newey. Max Verstappen even said he was waiting for the European season to judge about their real pace although Daniel Ricciardo admits they will be less than 0.5s off-pace in Melbourne. Red Bull will have high-class targets to show their pace, especially Verstappen who is starting his first complete season in a front-running team.

Since 2010, Ferrari has never found itself able to claim the team championship but this year might be the year of change. The team proved a very competitive pace during winter testing in Barcelona. Both Sebastian Vettel and Kimi Räikkönen managed to get to the top step. If the car seems very quick in qualifying simulations, we are yet to see its race pace among other cars. Since his comeback in 2014, Räikkönen has got more and more confident despite the rumours about his retirement since 2015 and 2017 could be the year he would overcome his teammate.

The big new thing about Force India this season is the livery. Say goodbye to the colours of the Indian flag and hello to pink, the colour of BWT, their new main sponsor. Esteban Ocon is also the new thing replacing Nico Hülkenberg alongside Sergio Pérez. The main goal for the team this year is to keep Williams behind them in the championship and keep their growing momentum.

Williams went through an odd winter with Valtteri Bottas’ departure and Felipe Massa’s come-back from retirement. Pre-season testing showed a rather reliable Williams with Lance Stroll roughly learning about F1 but having a great determination to do well. Williams will really want to take back their second place in the Mercedes-engined-cars championship, as they are now third and last in this category.

After a promising 2016 season, Mclaren seemed to have found the good recipe for good results. Yet, the changes of regulations regarding the engines did not help Honda. Fernando Alonso and Stoffel Vandoorne saw their hopes being crushed out during winter testing with no less than five power-units used in eight days of running. This year looks like a back to zero for McLaren Honda in the same situation than in 2015.

2016 was a difficult year for Toro Rosso with a driver change in the middle of the year and a frozen Ferrari engine from 2015. Yet, Max Verstappen and Carlos Sainz managed to get the best from the chassis of the car. Daniil Kvyat suffered more but gathered himself in the end of the season. Today, Toro Rosso carries new colours and a new Renault engine. The unknown remains the drivers’ future as they both enter in their third year with the learning team and with Pierre Gasly waiting for his F1 seat in Japan in SuperFormula.

Kevin Magnussen replaces Esteban Gutiérrez for the second year in F1 of the American team. The good Ferrari engine seems to fit the car and the reliability was there in Barcelona. However, Haas’ demons about brakes do not seem to have vanished during the winter especially for Romain Grosjean although Kevin Magnussen suffered less for this problem.

After a difficult year of transition from the Lotus–Mercedes, Renault really starts its F1 come back this season with the RS17. The arrival of a top driver like Nico Hülkenberg allows Renault to hope for a come-back in the teams’ top 5 despite internal issues like Frédéric Vasseur’s departure.

Last year, Sauber got the tenth place in the championship thanks to Felipe Nasr’s two points in the Brazilian Grand Prix. Yet, Sauber decided not to renew the Brazilian and preferred Marcus Ericsson whose main sponsor bought out the team. Pascal Wehrlein will have to spend another year with a difficult car to prove his talent to Mercedes against Esteban Ocon. Sauber will also have to deal with a frozen engine from Ferrari from 2016.

One of the main attractions of this year comes from the regulation changes, offering us visually more aggressive cars on track thanks to the lower and wider wings and the biggest tyres. Pirelli will keep using the same system with five compounds over the year and three per week-end.

About aero, some drivers are worried about the difficulties to overtake with wider cars and more downforce on the brakes. Felipe Massa also warned about the little degradation of the tyres which could provide us many one-stop races.

The tokens system for engine upgrades has been given up to let the four manufacturers free to add as many changes as they want, as long as they remain within the limits of the regulations. Finally, the introduction of the Halo system for cockpit protection has been postponed to -at least- another year. Other systems like Aeroscreen are still being developed.

The 2017 calendar consists of twenty races from Melbourne (Australia) in March to Abu Dhabi (UAE) in November. The main change in the calendar comes from the drop of the German Grand Prix in Hockenheim. This dropping-off implies a less dense summer for the teams who went through four races within five weeks last year. The European Grand Prix in Baku has been rebranded as the Grand Prix of Azerbaijan and does not clash anymore with the 24 hours of Le Mans. 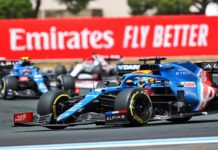