Home Single-Seaters Indycar PR1. Power comfortable in Brazil
Share
Facebook
Twitter
Google+
WhatsApp
Linkedin
ReddIt
Telegram
25 drivers at Sambadrome in Sao Paulo with their cars ready to reach a victory in Brazil Indycar Series. Brazilian fans always following the grand prix. A great success of the organization where Brazil is one of their best markets.
In this first practice there have been a total of 507 laps between all participants, was driven more than in other practices in other circuits because in this race the training schedule is only on Saturday, making two longer sessions on Saturday instead partitioning between Friday and Saturday. Qualyfing groups have been determined by the time of this session. Will Power has shown the fastest for the whole session very closely followed by Newgarden and Bourdais. They will be small differences in the qualyfing sesion which driver best suits the circuit today, will have a card game to achieve pole position. Today’s times have been only 6/10 of the circuit record achieved by Will Power last year. 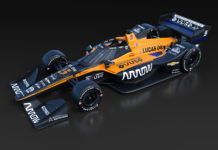