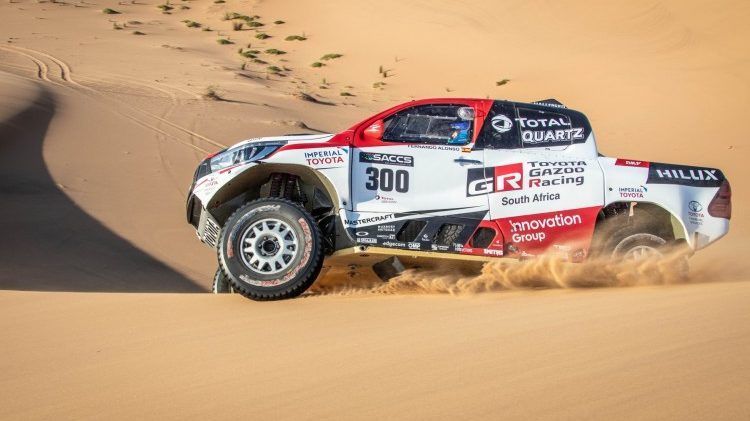 Following his first run in the deserts in March with Toyota, the Japanese manufacturer announced their intention to field their FIA World Endurance Championship winning driver in 2020 Dakar Rally.

Toyota revealed the timeline which Alonso will follow in the next five months in order to prepare himself and then make a call if he is ready for Dakar or not. It started with the three-day test in Namibia, Africa.

He had Toyota factory driver Giniel de Villiers as his guide, who also ran important items as they build towards to win the first-ever Dakar to be held in Saudi Arabia. Together they completed nearly 2,500 km in the dunes.

More such tests will take place in the months to come, which includes a competitive outing for Alonso in the Harrismith 400 cross-country rally, driving a Toyota Hilux on September 13-14.

Reflecting on the latest test which got over on Friday, Alonso said: “I’m very happy with my progress after this week’s test and starting to understand driving in the dunes a lot more and thanks to the tuition by Glyn and Giniel we made good progress.

“My mind-set right now is to approach the preparation as an adventure and try to improve step-by-step every time I jump in the car. As a racing driver, there’s always a competitive spirit inside of us which will come alive at the right time.

“With so much I still have to learn, working with an experienced team like TOYOTA GAZOO Racing is really a big weight off my shoulders. The team has a proven track record and they have been consistent over the years allowing me to focus on the milestones I need to reach every day.”

Toyota Dakar team principal Glyn Hall stated: “Fernando’s progress this week has been astounding. It is clear that he has a huge amount of talent, which he is putting to good use during this transition from tarmac to gravel and sand racing.

“It is important for him to get a feel for the car in the dunes, and especially to learn how to read and deal with the varied types of terrain. So far, he has taken to driving the Hilux with a sense of purpose, and we look forward to continuing his development at the next round of the South African Cross Country Series, which takes place in September”

And finally, teammate de Villiers added: “Fernando is an extremely quick learner, and he is clearly a very talented driver. He quickly adapted to the Hilux, and if he continues to learn at this pace, I feel confident that he will be able to take on the rigours of the Dakar Rally.

“His professional approach to this project speaks to his discipline as a racer. I look forward to continuing on this journey with him.” Considering the testing programme in place, it looks like Toyota will wait to confirm its 2020 Dakar line-up, which could change from 2019.