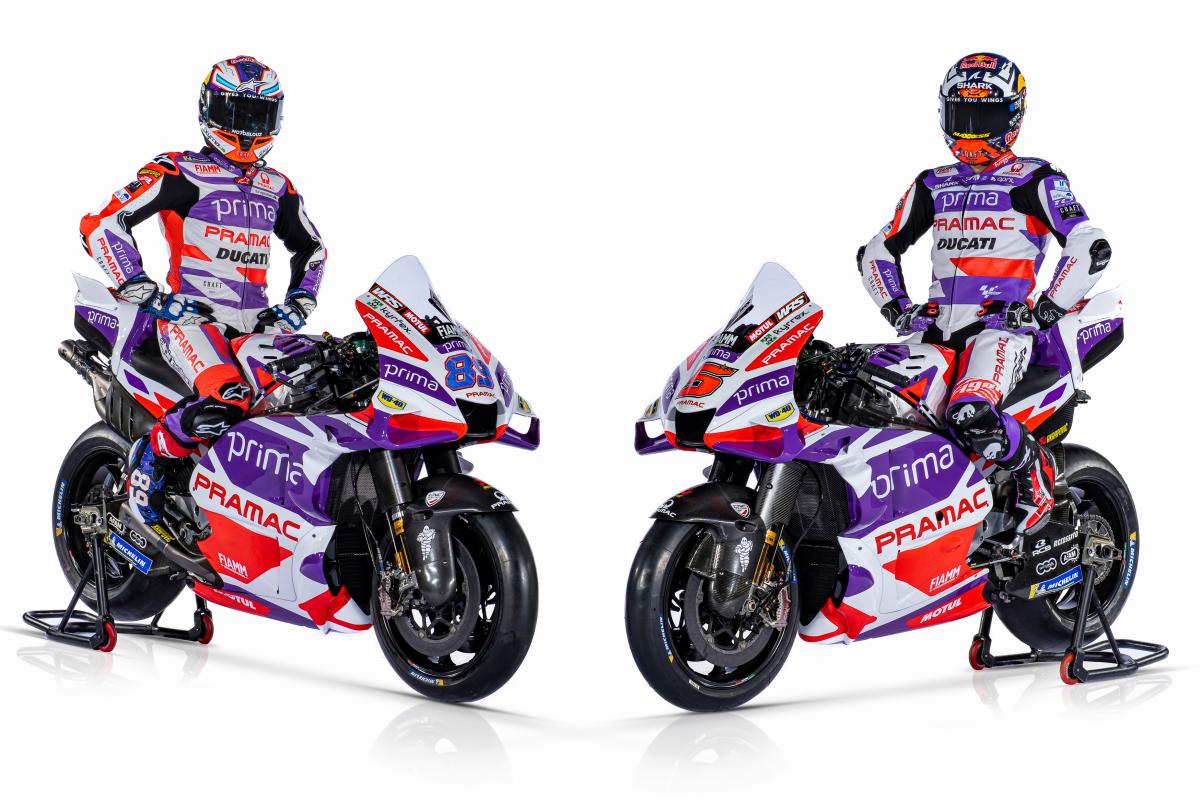 Pramac Racing is latest to showcase its 2023 Ducati livery/bike in an online launch with both to ride the factory version.

For the 22nd consecutive season, Prima Pramac Racing are ready to embark on a MotoGP campaign – and their second in partnership with tech company Prima Assicurazioni. The bearers of the team’s red, purple and white livery for the third year in a row are Johann Zarco and Jorge Martin. Zarco is a two-time World Champion in the Moto2 class and veteran of two decidedly impressive seasons, and Martin, World Champion in the Moto3 class and an extraordinary talent who has gathered numerous key results in recent seasons, are ready again this year with the new Ducati Desmosedici Gp23. Both riders will ride the Ducati Desmosedici GP ‘factory’ version.

Totalling eight podiums and seven pole positions last season, the two riders are preparing real surprises for the team and for all fans. In the 2023 season, Prima Pramac Racing aim to rank in the top three positions of the overall standings and to qualify for the Best Independent Team and Rider titles.

Paolo Campinoti, Team Principal of Prima Pramac Racing: “This year’s goal is the same as what we set ourselves at the beginning of every season − being the best Independent Team and giving all the Official Teams a real run for their money! The last few seasons have shown the world that our Team is a true MotoGP player, that our riders constantly seek top positions, and that the team members make us one of the most envied on the Paddock; as Team Principal, I couldn’t ask for more. I’m proud of my guys, of what we have become, and collaboration with Prima has certainly given us an extra boost. We will be hitting the track soon for early season testing. I can’t wait to see what this season will bring.”

George Ottathycal, CEO of Prima Assicurazioni: “We are really delighted at this chance to kick off the MotoGp 2023 season together with Paolo, the riders and the whole team. The team pleased us greatly last year. In addition to sharing important goals. Thanks to teamwork; the first year already proved a valuable opportunity for us to compare notes between two concerns that focus on technology and talent as sparring partners that grow together. We are real bike fans. It’s no coincidence that more than 1 in 10 motorcyclists in Italy are insured with Prima, We’re  here to cheer on the riders and team, certain that they’ll hold the flag high.”

Gino Borsoi, Prima Pramac Racing Team Manager: “We’re looking to this season with great enthusiasm. For me it will be a new adventure, I’d go so far as to say it’ll be an important year. The 2023 Season will be my first with the Prima Pramac Racing team.  I don’t think it’s a coincidence that ‘23’ always has been a significant number for me, even when I was racing…let’s hope it’s a good omen. For the tests in Valencia, I already got to know all the guys and the riders. My first impressions were very encouraging, I was very satisfied. You can take nothing for granted in this world − ever − but I’m sure we will do our utmost.”

Johann Zarco: “For the third consecutive year I will be with Team Prima Pramac, I am very pleased to be wearing these colours for another season. We have a great team, a great bike… and Jorge and I get on very well together. I’d say we have all the ingredients for a great season, and maybe − who knows? − the win will come our way.”

Jorge Martin: “I can’t wait for the action again with my team. Last year was a special year, with very difficult moments too, but it served for me to grow and become stronger. I have big plans and real ambition, and together with my team I know we can do great things. In Sepang when I climb onto my Ducati I’ll know whether all the hard work of the winter pause was worth it. We’re ready! I’m, ready!”