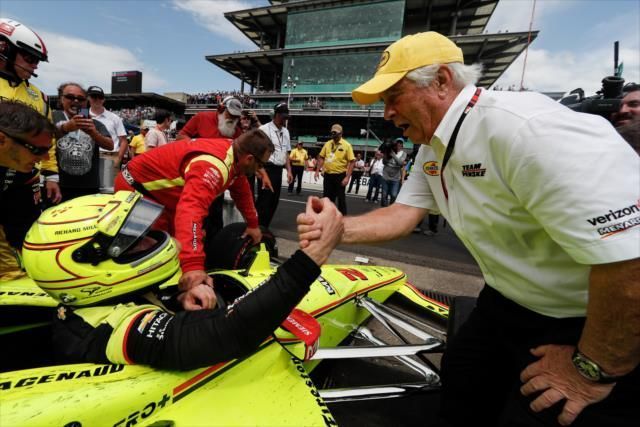 Roger Penske is to cutback on IndyCar team work to erase the conflict of interest as he eyes F1/NASCAR events at Indianapolis Motor Speedway.

The president of the United States is not allowed to run businesses whilst in office and there’s good reason for that. The president should always act in the best interest of the nation. This same logic follows into IndyCar and for that matter, everywhere.

It is cause for concern within the sport now as the series’ new owner, Penske, also runs a IndyCar team, leading some to believe that he will act in his own interest, rather than that of the sport he possesses power over from Hulman & Company.

Penske, however, assured fans and the media that he would not let his involvement in the sport on a competitive level get in the way of his involvement on an executive level. His rivals have so far been positive as well for him to own the championship.

“From a competitive perspective, I’m planning to really step down from being a strategist on the pit box,” said Penske. “You won’t see me there on race day, I think I’ve got a bigger job to do now is to see how we build a series to the next level.

“I think you have to ask our competitors. Tony’s (the previous owner) been a car owner, we were talking about it today. I think Tony, you said that all along, Wilbur Shaw, and Eddie Rickenbacker were drivers, so there’s been some history.

“But I don’t want to leave this conversation. I understand the integrity, and there’s got to be a bright line, and to me, I know what my job is, and hopefully I’ve got enough credibility with everyone that we can be sure that that is not a conflict.

“I’ll do my very best to make sure that isn’t.” The motorsport-mogul’s ability to run the series alongside a private team remains to be seen, but he certainly hopes to impress in his inaugural 2020 season away from the pit wall.

Penske also talked about how the buying IndyCar came about, which only happened in the recent months after initial talks at the end of 2019. They wanted everything to be done at a quick pace rather than continue discussing without any outcome.

The billionaire also spoke about how they are going to make IMS a world class facility which not only hosts the IndyCar races – especially Indy500 – but also run NASCAR, endurance events and possibly see a return of F1 too.

“I think you look at 27 years, there’s no reason to break that string of races,” said Penske. “I had a chance to talk to Jim France late last night to tell him that we were going to have this conference here in the morning, and he obviously was excited.

“We would expect to take this for many, many years. They need to run at Indianapolis. We want them to, and there’s no question that we’re going to look at opportunities to expand the relationship with them in the future.

“Look, we’ve got to break some glass on some of these things, don’t we? We’ve got to try some of this, and I’m prepared to take a risk. No risk, no reward in many cases. I wouldn’t say it’s out of the possibility.

“I think we look at the speedway itself, the investment with the 100 million dollars that was put in a few years ago before the 100th running of Indy500. I think you’ve seen a tremendous change, and we want to add capability as there are more fan zones.

“What can we use this for? Can we run a 24-hour race here? Can we run a Formula 1 race here? What are the things we can do? This is a great asset. Once the tradition had been broken in adding the NASCAR race, which obviously we’re going to get behind.”

While NASCAR could certainly be run, it being an American-run series, but for F1 to return, it will be a big ask, especially at a time when Liberty Media is extensively looking to add another American grand prix. Running at IMS will certainly bring some nostalgia.

Here’s the initial story on the buyout by Penske

The article was co-written and edited by Darshan Chokhani