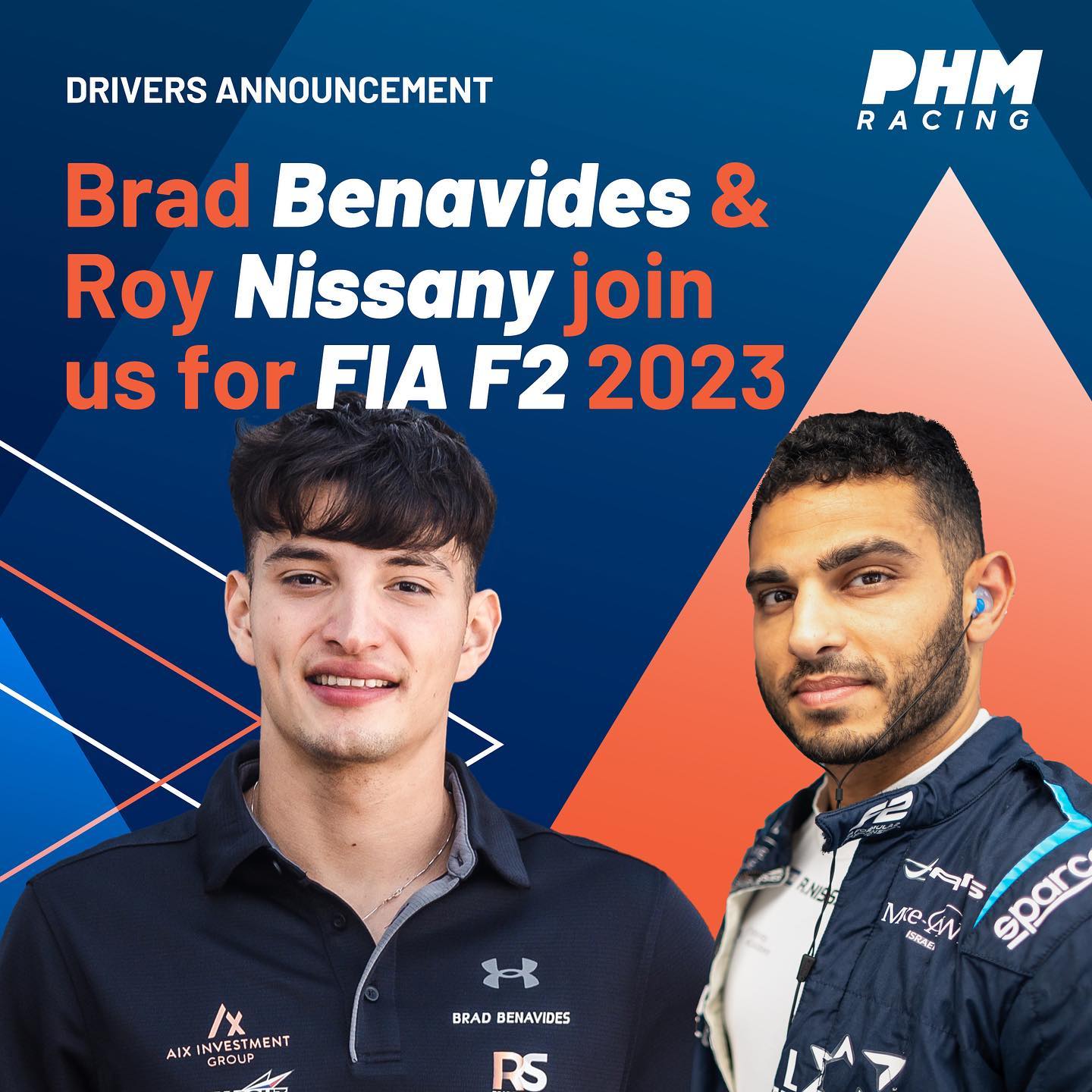 PHM Racing by Charouz have signed up Roy Nissany and Brad Benavides for the 2023 FIA Formula 2 (F2) Championship.

Stepping up to F2 after his rookie Formula 3 campaign, American-Spanish racer Benavides earned a points-scoring finish for Carlin in the Spa-Francorchamps Sprint Race. The 21-year-old has experience competing in Formula Renault Eurocup, the Formula Regional European Championship and the Euroformula Open Championship, with his best finish being 13th in the 2021 Euroformula Standings.

“I firstly want to greatly thank my main sponsor AIX Investment Group, it’s an honor to have the trust and backing of such a successful organization. I am tremendously grateful that they’re helping me to get one step closer to my life’s dream,” an elated Benavides said.

“I’d also like to thank PHM Racing by Charouz for this amazing opportunity, I’m genuinely very motivated, happy, grateful, and completely dedicated so that this next year goes as well as possible. Until now, for me it’s been a path with great challenges. In the face of adversities my spirit is to fight and come out at the top, something that has best defined me in my career. I’m already concentrated on preparing myself in the best possible way before the season starts, looking to really maximize the time I’ve got”.

Nissany completes their line-up, switching from DAMS after two seasons and his most successful F2 campaign yet, having scored eight points finishes. Nissany currently has one podium to his name and will be hoping to add to that tally in 2023.

“It is a very good news that I will race with PHM Racing by Charouz,” Nissany said. “The tests we have done together last week showed some good potential, and I also have good memories from our previous experience together a few years ago. I can’t wait to get back in the car and start this new adventure. Next season is going to be long and demanding, and I’m already thrilled to race at those 14 amazing venues being part of the 2023 calendar”.

The pair showed great pace throughout the three-day test at the Yas Marina Circuit, achieving five top 10 appearances across the six sessions. Charouz Racing System team owner, Antonín Charouz, is optimistic that their mix of rookie talent and experience will complement each other next year.

“I’m very happy and excited to share the news of the agreement we reached with Brad and Roy after the very positive three days of testing we had in Abu Dhabi last week,” Charouz remarked. “We’ll have a very strong pair next year, with an expert driver and a young talent with so much potential, I’m sure they will be a good suit for the team and that we’ll be able to give them the chance to express their speed and skills on track during the next season. I would also like to thank AIX Investment Group for playing an important part in this, we really can’t wait for March to come”.

Paul H. Muller, PHM Racing team owner, commented: “I am very pleased that we were able to recruit two very talented drivers, Brad and Roy, for our new Formula 2 team. The fact that the team was able to work with both of them during the tests in Abu Dhabi means that we can benefit from the experience we have already gained. In March we will finally get started.”

Charouz Team Manager Bob Vavrik added: “I must say that we did put together quite a team for the next season. The morale is high and the level of expectations is now going through the roof. We had the chance to start working with Brad and Roy during the tests in Abu Dhabi and everyone is already fully focused on the next season and all the preparation work that needs to be done before the first race. We’ll get to Bahrain in March ready to play our part”.