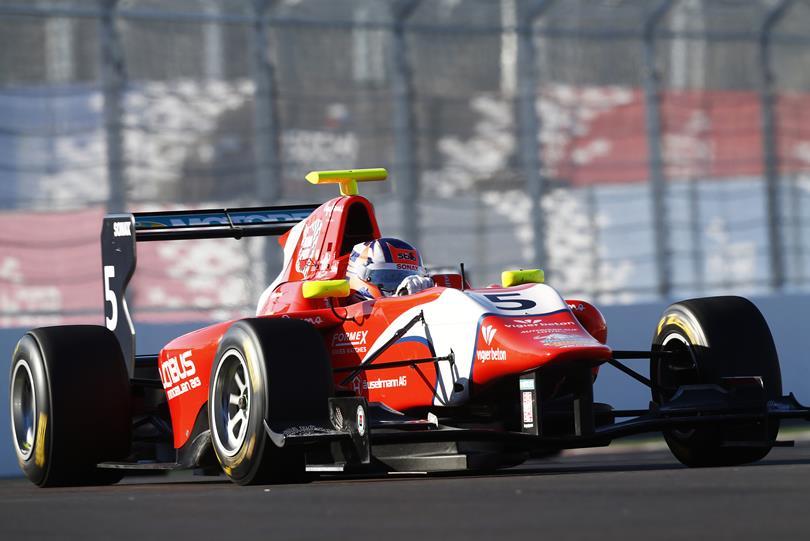 Patric Niederhauser has taken a victory with a final sprint 2 laps following a safety car period. This fight has decided the podium places that would be for the Swiss and Stoneman and Kirchhofer, second and third respectively. Lynn has a stone’s throw world despite his fifth.

This morning in Sochi we could see if Lynn becomes world champion GP3 or have to wait for the last race.

The start was rugged because in the first few meters the cars of Fontana, Varhaug, Agostini and  Stanaway were involved in a multiple accident that caused the safety car out and then the arrival of the red flag. But before that Lynn lost the second in favor of Mardenborough Niederhauser and kept the first place.

Race direction would restart the race (behind the safety car) after 10 minutes, time to remove the remains of the cars and clean the track.

The stewards were to investigate Eriksson by contact with Fontana who caused the accident at the first corner, again the cars went out on track and at the crash site there was a lot of sepiolite, which would make the cars lose some of grip.

And after two laps behind the safety car the race was restarted and the stewards condemned Eriksson to make a Stop and Go for causing the collision that ended with the race of 4 pilots, serving a penalty in a lap later relegate him to the last position. Lynn lost two consecutive positions with Kirchhofer and Stoneman and fell to fifth.

Kirchhofer was flying over the Sochi circuit and tore out the stickers of Mardenborough and was looking for Niederhauser. Stoneman also wanted to overtake the British driver but he was defending his position very good.

After a few laps where things were fairly stabilized, Ceccon retired 6 laps to go and in the next lap Martsenko car stopped at Turn 17 caused the second safety car onto the track and retire the absence of 2 laps.

All pilots came out with ears pricked and as we saw in Lynn and Stoneman earned a position overtaking Mardenborough although English would steal to Lynn’s possition. Ahead of him Kirchhofer was attacking Niederhauser’s place but he couldn’t overtake and who was fishing in troubled waters was Stoneman was sticking to them and stood first but although after a good battle but only managed to be second.

Niederhauser won, Stoneman second position and the last step of the podium is for Kirchhofer. Lynn still leads the championship and he can toch the title despite his fifth.