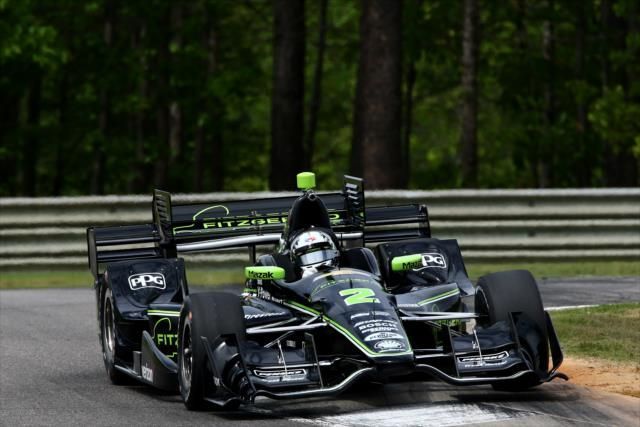 Josef Newgarden added to the growing bank of fond memories he is accumulating at Barber Motorsports Park, driving to victory today in the Honda Grand Prix of Alabama presented by America’s First.

Newgarden’s win by 1.0495 seconds over Scott Dixon is his second on the 2.3-mile, 17-turn permanent road course and comes two years after he secured his first career Verizon IndyCar Series victory at the same track. It also is the 26-year-old American’s first win since joining Team Penske, which took three of the top four finishing positions in the 90-lap race.

Driving the No. 2 Fitzgerald Glider Kits Team Penske Chevrolet, Newgarden took the lead for the first and only time on Lap 77 when teammate Will Power was forced to pit in the No. 12 Verizon Team Penske with a punctured left rear tire.

“This is a good one to have, I think we earned it,” said Newgarden, who started the race seventh. “This was a great car this weekend. We were on it.

“I think it was shaping up to be a really great battle for me, Dixon and Will, and it ended just being between Dixon and me. I feel bad for Will. I wish he could have been in that with us, but sometimes that’s the way it rolls.”

Dixon finished second for the fifth time at Barber and for the 34th time in his Indy car career, tying Michael Andretti for fourth all time. The Chip Ganassi Racing driver has reached the podium seven times in the eight races on the Alabama track but never won.

Dixon jumped two spots in the season standings to second place and is within six points of the championship lead after the third of 17 races this season. But the driver of the No. 9 NTT Data Honda lamented the pass Newgarden made on him for second place on a Lap 69 restart.

“I saw him late coming into (Turn) 15 or 16 on the last restart and I tried to turn down, but the car was just so neutral I just didn’t have the rear grip to pull it off,” Dixon said. “Kudos to Josef; he drove a hell of a race and the win was well deserved. The NTT Data car was strong in the race. I think we actually had the speed. I think if we would have had clean air in that race, we would have checked out.”

Simon Pagenaud, last year’s Barber race winner and Verizon IndyCar Series champion, placed third in the No. 1 Menards Team Penske Chevrolet, just ahead of teammate Helio Castroneves in the No. 3 AAA Insurance Team Penske Chevrolet. Alexander Rossi, winner of last year’s historic 100th Indianapolis 500 presented by PennGrade Motor Oil, gained the most positions from start to finish of any driver, going from 18th on the grid to wind up fifth in the No. 98 Andretti Autosport/Curb Honda.

Power, bidding for his third win at Barber, led 60 laps but wound up finishing in 14th place.

“I held on as long as I could, but I knew (the tire) was going down – you could feel it,” he said. “We’ll move on to the next one. I’m thankful to my crew, Verizon, the whole team. They put a great effort in and that’s how racing goes sometimes.”

Newgarden, in his sixth Verizon IndyCar Series season, collected his first win for Team Penske in just his third race with the prolific organization whose 188 Indy car wins are the most in history. By comparison, it took Power five races, Castroneves seven and Pagenaud 19 to get their first wins for the team.

“It’s a group effort (at Team Penske) – all four of these guys work together,” Newgarden said. “I’m thrilled for the (No.) 2 car guys, but this is a team effort with all four cars. So, whoever is in victory lane, we just want to get someone there with Team Penske.”

Dale Coyne Racing’s Sebastien Bourdais, in the No. 18 Sonny’s BBQ Honda, finished eighth in the race to retain the championship lead. Bourdais has accumulated 117 points, with Dixon second at 111, Newgarden third with 110, Pagenaud fourth with 106 and James Hinchcliffe fifth at 102.

Barber officials announced a three-day attendance of 82,745, which equated to a ticket revenue increase of more than 10 percent from last year.

“We are extremely encouraged by the fact that our ticket revenue has increased for the fourth straight year,” said Gene Hallman, CEO of ZOOM Motorsports, the exclusive event promoter of Barber Motorsports Park. “INDYCAR has so much positive momentum and we look forward to the continued growth of the sport.”