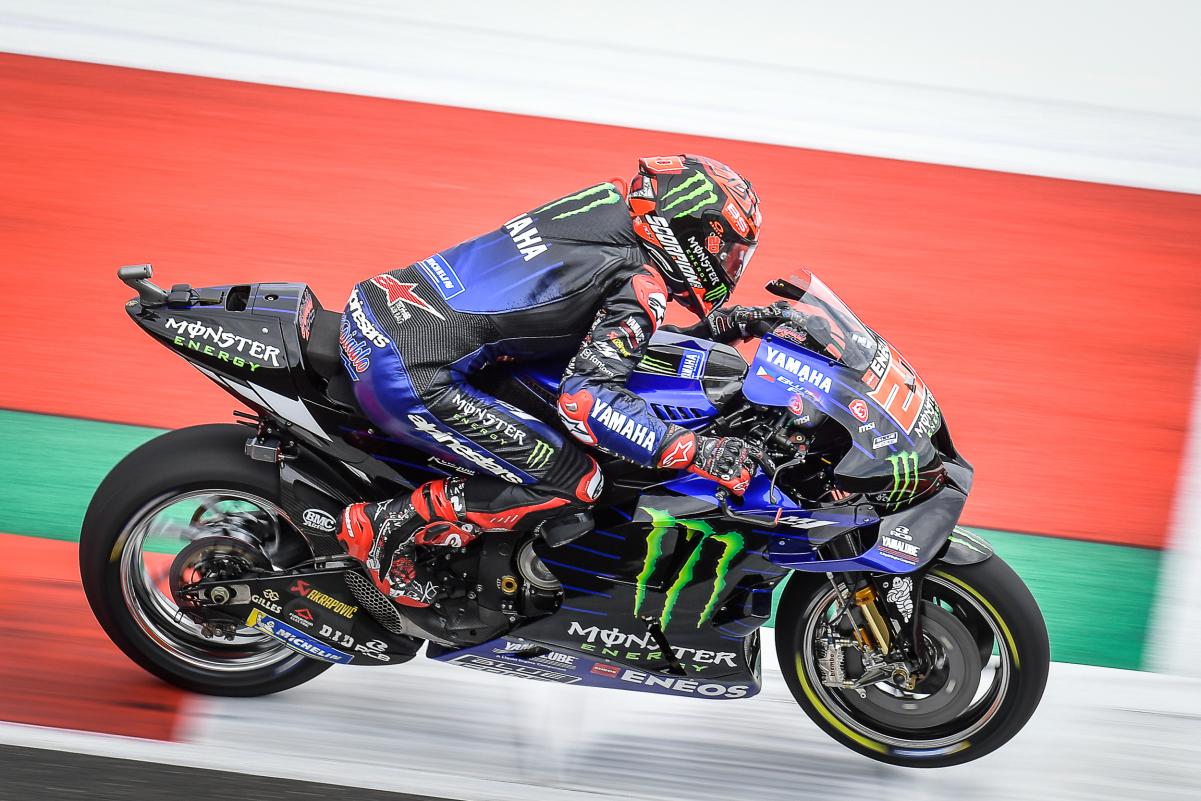 The first part in MotoGP qualifying in Indonesian GP saw a big pack of riders trying to make it through to Q2. Ducati’s Francesco Bagnaia led the way from Gresini Ducati’s Fabio di Giannantonio pushing the VR46 Ducati riders to third and fourth.

For Honda, it wasn’t the cleanest of sessions with both Marc Marquez and Pol Espargaro having big moments on their bikes. In fact, the former eventually crashed at Turn 13. He rushed onto the second bike for a last attempt, but it didn’t work well.

He crashed on the second bike as well at Turn 12 which ended any chance of making it to Q2. There were falls for VR46’s Marco Bezzecchi and Suzuki’s Joan Mir, both of whom didn’t make it into Q2, with Bagnaia leading the pack after setting a 1m31.219s lap.

He led di Giannantiono who set a 1m31.631s as VR46’s Luca Marini just missed out in third and will start the Indonesian MotoGP race from 13th ahead of teammate Bezzecchi with Marquez eventually ending up 15th from his earlier set time.

Teammate Espargaro slotted in 16th from RNF Yamaha’s Andrea Dovizioso, with Suzuki’s Mir in 18th ahead of LCR Honda’s Alex Marquez and Aprilia’s Maverick Vinales in the Top 20. The pair of Tech 3 KTM riders were 21st and 22nd in the order.

It was Raul Fernandez ahead of Remy Gardner with RNF’s Darryn Binder in 23rd and LCR’s Takaaki Nakagami 24th to round out the 24 runners.

The second part in MotoGP Indonesian GP qualifying saw Yamaha start off in style with Fabio Quartararo leading the way as he did in the practice sessions. But it was not so smooth for them after Franco Morbidelli crashed out early in the session at Turn 5.

Quartararo wasn’t troubled all-through to take MotoGP pole in the first-ever Indonesian GP with a 1m31.067s lap. Despite looking strong early in the session, Ducati’s Bagnaia was pushed off the front row after he failed to improve on his lap times.

But both the Pramac Ducati had enough in tank to make it in the front row where Jorge Martin was second with Johann Zarco third. A late improvement from KTM’s Brad Binder saw him finish fourth with Gresini’s Enea Bastianini in fifth.

Bagnaia was sixth eventually from the other KTM of Miguel Oliveira, while Suzuki’s Alex Rins was eighth after coming back from a fire in FP4. Ducati’s Jack Miller was only ninth from Aprilia’s Aleix Espargaro, who had a late crash in the session. Di Giannatonio was 11th with Morbidelli in 12th.