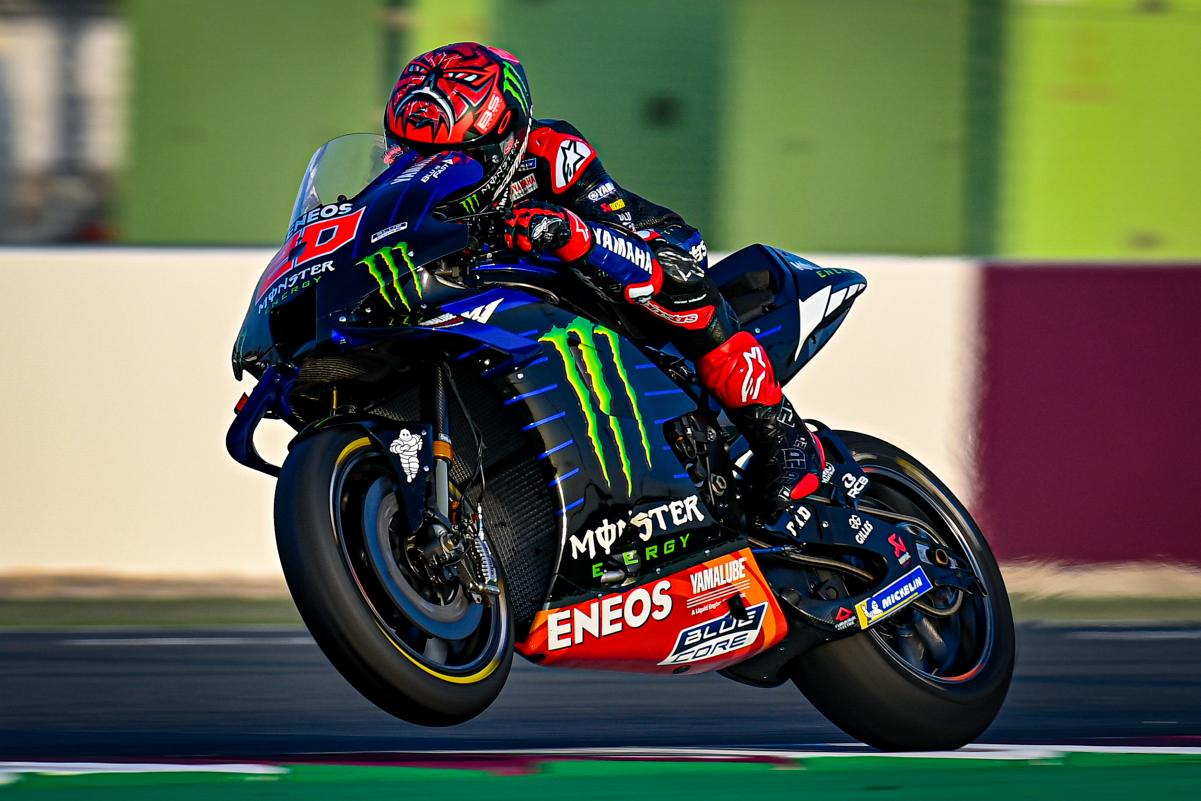 Yamaha’s Fabio Quartararo edged out Ducati Jack Miller by 0.077s on Day 2 of the Qatar MotoGP test at Losail circuit.

Much like Day 1, it looked like Aprilia’s Espargaro will top on Day 2 of Qatar MotoGP test at Losail International Circuit, but for Yamaha’s Quartararo, who set a 1m53.940s to displace Aprilia’s A Espargaro – the Frenchman was the only to dip in the 1m53s bracket.

Espargaro was then also beaten by Ducati’s Miller, with Petronas SRT’s Franco Morbidelli just 0.001s behind the Spaniard. Honda’s Stefan Bradl was fifth with Pramac Ducati’s Johann Zarco doing well once again to round out the Top 6 runners.

The other Yamaha of Maverick Vinales was seventh, with the two Suzuki riders Joan Mir and Alex Rins in eighth and 10th,  respectively, where a late quick lap from Ducati’s Francesco Bagnaia put him in ninth. It pushed KTM’s Miguel Oliveira to 11th then.

The Portuguese rider ran the holeshot device which the Austrian manufacturer is testing. Honda’s Pol Espargaro showed improvement on Day 2 to be 12th ahead of two LCR Honda of Alex Marquez and Takaaki Nakagami. Both the riders had crashes, though.

Marquez crashed in the final corner, while Nakagami did so in Turn 2. Pramac’s Jorge Martin also had a crash in Turn 15 as he finished 19th eventually. Ahead of him were Yamaha’s Test Rider 1 in 15th, Avintia’s Enea Bastianini in 16th, Aprilia’s Lorenzo Savadori 17th and Avintia VR46’s Luca Marini in 18th.

The Top 20 was rounded out by Petronas SRT’s Valentino Rossi, with Tech 3 KTM’s Danilo Petrucci in 21st, Yamaha’s Test Rider 2 in 22nd, Tech 3 KTM’s Iker Lecuona was 23rd and KTM’s Brad Binder in 24th ahead of the four test riders.

Here’s how Day 1 of Qatar MotoGP test panned out