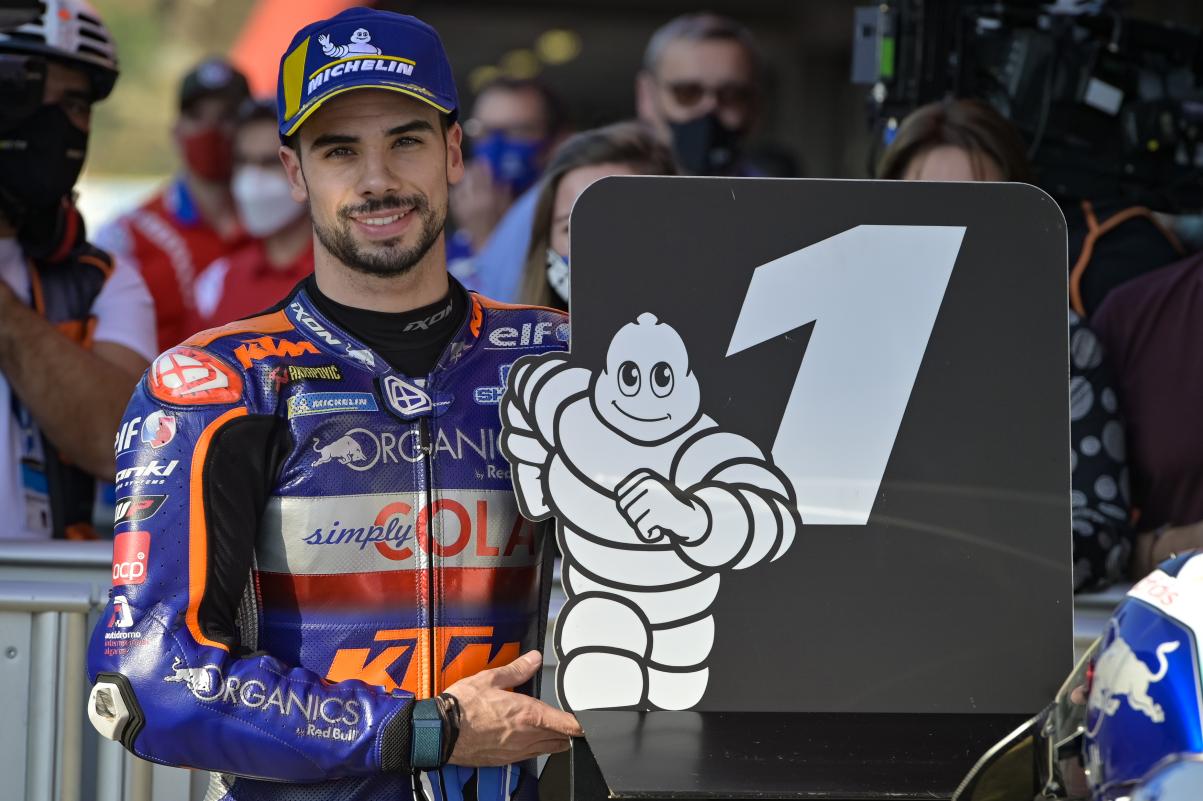 He and Suzuki’s Alex Rins cleared Honda’s Stefan Bradl but the German fought back to fifth. Espargaro had a moment to go wide and drop back with Rins dropping at the fag end of the Top 10 as well. Petronas SRT’s Fabio Quartararo was eighth after Lap 1.

It wasn’t long in that position for Mir as he hit the back of Zarco and dropped to 20th as KTM’s Brad Binder was caught out in this to fall back to last as well. The South African eventually retired after a crash, joining a hurt Pramac’s Francesco Bagnaia.

Replays of the start revealed a shoulder bump for Bagnaia from Mir, which hurt him. At the front, meanwhile, Oliveira led the way calmly from Morbidelli and Miller in the Top 3. The fight for fourth saw Espargaro recover well to pass both Bradl and Crutchlow.

The group was joined by Zarco, who slotted in seventh behind Rins, as Rins passed Quartararo for eighth, while Nakagami rounded the Top 10. Honda’s Alex Marquez was another mover to 11th ahead of Dovizioso and Aprilia’s Aleix Espargaro.

One of the MotoGP riders’ to lose out was Vinales in 14th ahead of teammate Valentino Rossi in the final scoring position. It was getting troublesome for Yamaha as Quartararo went down from ninth to 12th after losing out to Nakagami, Dovizioso and Marquez.

In the fight for fourth ahead, Espargaro went wide again to concede the position to Crutchlow but the KTM rider immediately fought back to re-take fourth with the Birt leading Bradl, Zarco and Rins tucked up right behind.

Zarco eventually went past Bradl for sixth as behind them, Dovizioso cleared both Nakagami and Rins to eighth, as the Suzuki rider dropped to 12th after both Espargaro and Marquez managed to clear him for 10th and 11th respectively.

Rins had the Yamaha train behind with Vinales leading Quartararo and Rossi, where the Spaniard passed the Frenchman. It was timely win for Mir with the 2020 MotoGP title in Valencia, as the Spaniard was forced to retire due to damage to his bike.

In further misery, Rins lost to Vinales for 12th as Rossi passed Quartararo for 14th. While the battle raged in the fag end of the points position, the front pack has Miller closing in on Morbidelli for second, as Zarco passed Crutchlow for fifth.

Just behind them, Dovizioso passed Bradl for seventh as Nakagami, Espargaro and Marquez tucked him the German. There was late dramas still to come with both Zarco and Crutchlow losing out in the end stages, allowing others to capitalise.

It was Nakagami, who pounced on the opportunity along with Dovizioso, Bradl, Espargaro and Marquez. At the front, meanwhile, Olievira was unbeatable throughout, as the local rider secured his second MotoGP win in Portuguese GP at Algarve.

Miller ended up second after passing Morbidelli in the final few corners to help Ducati win the constructors’ championship, as Espargaro was fourth from Nakagami, Dovizioso, Bradl, A Espargaro and Marquez in the Top 9, while Zarco dropped to 10th.

After struggles early on, Vinales managed to climb up to 11th with Rossi in 12th as Crutchlow ended up 13th eventually from Quartararo and Rins. Missing out on points were Ducati’s Danilo Petrucci in 16th ahead of Avintia’s Tito Rabat and Tech 3’s Mika Kallio.