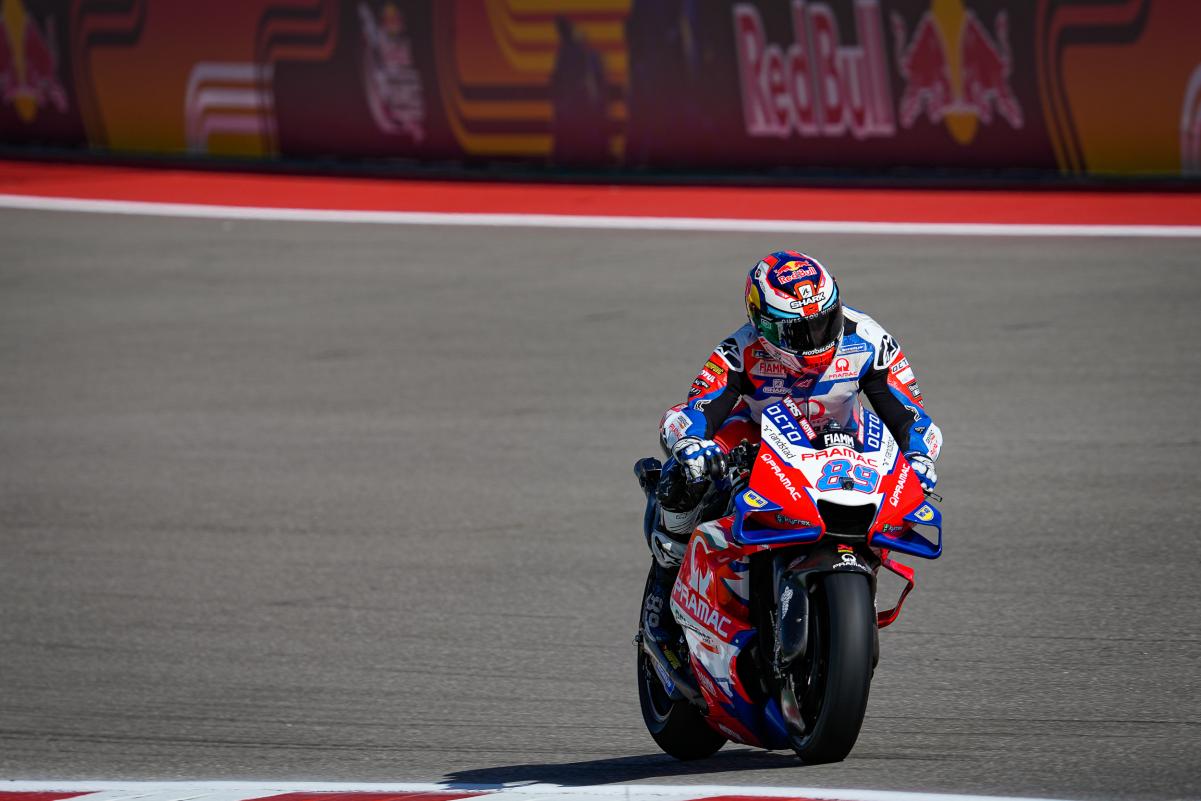 It was a Ducati show with Jorge Martin coming through from Q2 to MotoGP pole in Americas GP with Jack Miller second and Francesco Bagnaia third.

The first part in MotoGP Americas GP qualifying at Circuit of the Americas saw an early crash for RNF Yamaha’s Darryn Binder, whose weekend has seen falls already. As the lap times started to come through, Tech 3 KTM’s Remy Gardner had a fall in the final sector.

It was Pramac Ducati’s Jorge Martin setting early pace with a 2m02.487s lap, with Suzuki’s Alex Rins second from Aprilia’s Aleix Espargaro after first run. The second run saw disaster for the Argentina MotoGP race winner with a crash at Turn 8.

It ended his hopes to make it in Q2 as slipstream mayhem ensued with riders waiting for their rivals to lead the way. The early lap from Martin stayed on with Rins making it into Q2 with a 2m02.723s lap, with Espargaro ending up third to start 13th in Americas GP.

Yamaha’s Franco Morbidelli was only 19th with KTM’s Miguel Oliveira 20th from Tech 3 pair of Raul Fernandez and Gardner as LCR Honda’s Alex Marquez and RNF’s Binder rounded out the 24 MotoGP runners in the Americas GP.

The final part of MotoGP Americas GP saw early fall for Gresini’s Enea Bastianini but the Italian managed to continue on. As the first laps started to come in, Yamaha’s Fabio Quartararo had an uncharacteristic crash with about eight minutes remaining.

He rushed back into the pits where he was seventh from his first fast lap. It was Ducati’s Jack Miller leading the way with a 2m02.327s lap with teammate Francesco Bagnaia second and Pramac’ Martin third ahead of the second and final run for the riders.

It was quite the fight between the Ducati riders where Bagnaia went fastest initially but he was beaten by Miller. However, Martin went up by 0.003s to take MotoGP pole in Americas GP after his 2m02.039s lap to lead a Ducati 1-2-3-4-5.

Miller ended up second with Bagnaia third, Pramac’s Johann Zarco fourth and Bastianini coming through to be fifth after his early fall. The Italian continued his games along with Honda’s Marc Marquez until the chequered flag.