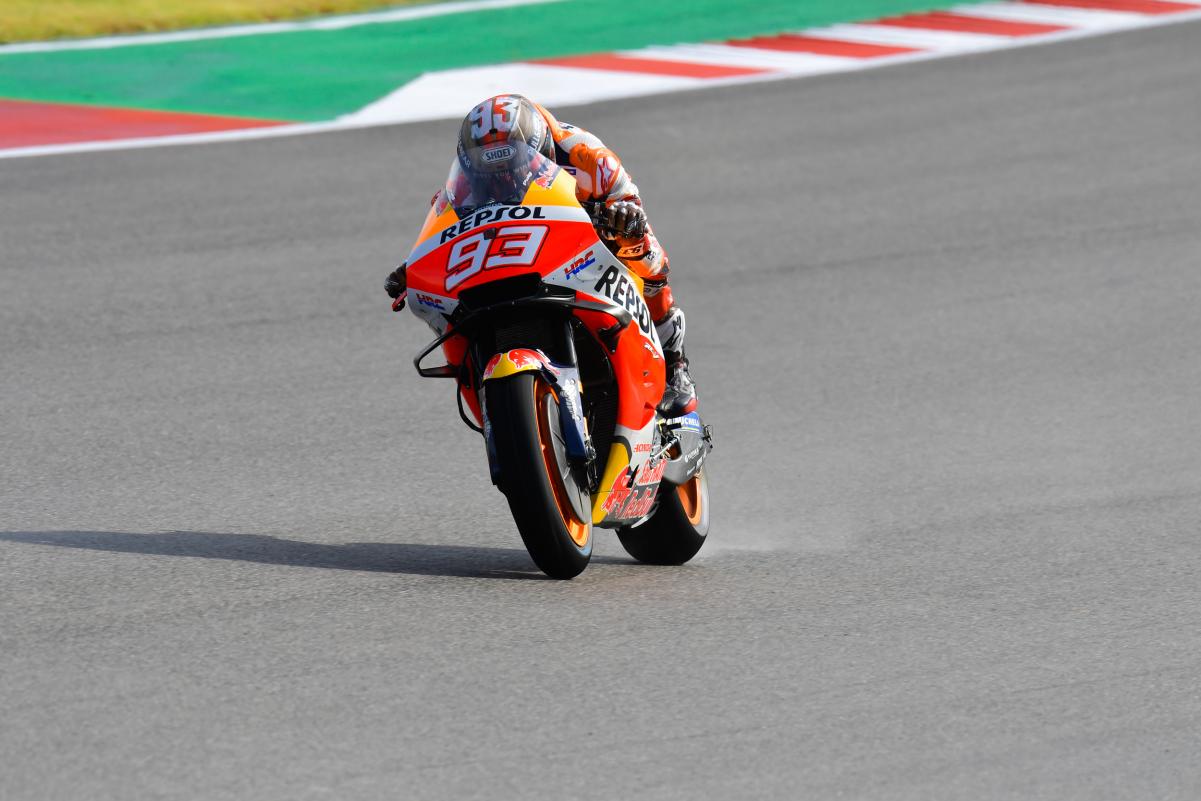 Pole-sitter Francesco Bagnaia did not have a good start to MotoGP Americas GP abode his Ducati as he slipped to fourth behind leader Honda’s Marc Marquez, Yamaha’s Fabio Quartararo and Suzuki’s Alex Rins in the opening lap.

In fact, Bagnaia lost to Pramac Ducati’s Jorge Martin too, who cleared Rins for third. Behind, LCR Honda’s Takaaki Nakagami steadied himself in sixth but crashed out at Turn 12, as Ducati’s Jack Miller took his place after passing couple of riders.

He got through Suzuki’s Joan Mir and KTM’s Brad Binder, who were having a battle of their own. Pramac Ducati’s Johann Zarco got himself into the Top 10, but crashed out at Turn 1, which promoted Honda’s Pol Espargaro to ninth from Avintia Ducati’s Enea Bastianini.

The Italian was in the Top 10 from KTM’s Miguel Oliveira, who had a bad start but passed multiple riders to be 11th from LCR’s Alex Marquez, Petronas SRT’s Andrea Dovizioso, Avintia’s Luca Marini and Aprilia’s Aleix Espargaro in the Top 15.

The Spaniard started to progress up, but it didn’t last long after he crashed at Turn 13 to end a nightmare weekend. Up front, Marquez started to build on a gap lap after lap, leaving Quartararo to defend from Martin, who had Miller on his tail soon.

The Australian cleared both Bagnaia and Rins, where his teammate too got the better of the Suzuki rider to be fifth. Mir kept Binder at bay for seventh as Bastianini cleared Espargaro for 10th, with Oliveira joining the fight too.

It was quite the team play at display at the front when Miller allowed Bagnaia through for fourth as the Australian started to struggle. The Italian then started his chase of Martin for third place, where the Spaniard made a mistake to allow the Ducati rider to close up.

In fact, Martin started to struggle a lot and Bagnaia eventually passed him for third. To add to his misery, the Pramac MotoGP rider was handed a Long Gap Penalty for taking a short-cut at Turn 4-5 when he made mistake, being chased by the Italian.

Up front, it was continuation of a MotoGP win record for Marquez when took the chequered flag at COTA in first place in Americas GP after starting third. Quartararo had a lonely finish in second as Bagnaia rounded out the podium slot after a fightback.

Rins passed Martin for fourth as Bastianini ended up sixth when Mir and Miller collided on the final lap. The Suzuki MotoGP rider was looking a way through in the left-hander but made contact, which allowed the Avintia rider through on the inside.

Mir was seventh from Miller as Binder was ninth and Espargaro 10th. Oliviera kept 11th from Marquez, who fended off Dovizioso charge as Marini and Petronas SRT’s Valentino Rossi completed the Top 15 points positions in 14th and 15th.

In fact, Rossi was last on Lap 1 but came through to 15th, as Tech 3 KTM’s Iker Lecuona was 16th from Nakagami, who got going again. The other Tech 3 of Danilo Petrucci was 18th from Yamaha’s Franco Morbidelli, who dropped to last.

UPDATE: Following the collision between Mir and Miller, the FIM stewarded handed a 1-place drop penalty to the former for irresponsible riding. As a result, the Suzuki rider drops to eighth while the Ducati rider gains a place to be seventh.