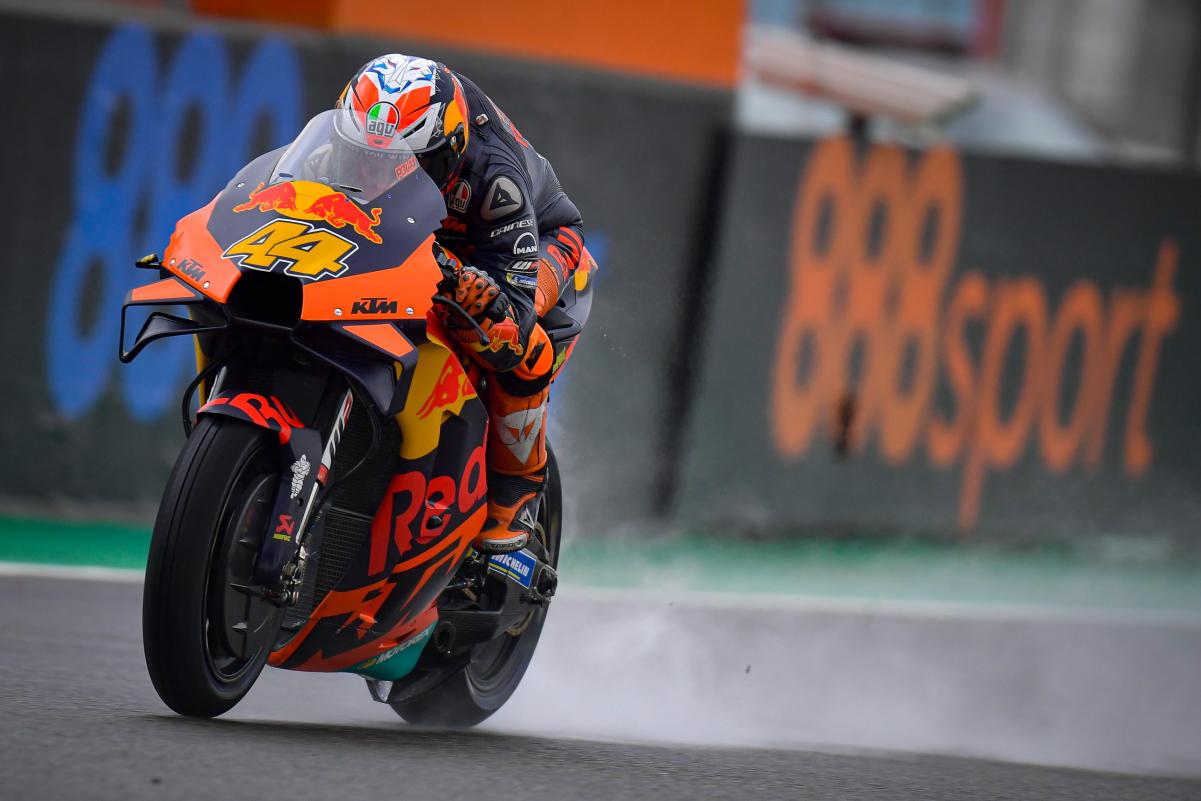 It was tricky start to first part in European GP MotoGP qualifying at Valencia due to the mixed weather conditions as despite sunshine, the circuit was still wet for the dry tyres. The positions at the front changed hands between multiple riders at the start.

But Tech 3 KTM’s Miguel Oliveira (1m10.795s) took charge from Honda’s Stefan Bradl for the longest time until Pramac Racing Ducati’s Francesco Bagnaia displace the German MotoGP rider to slot himself into second in the fight for a place in Q2.

A late lap from Avintia Ducati’s Johann Zarco helped him to be fourth with Honda’s Alex Marquez behind him, while Yamaha’s Valentino Rossi was sixth and Maverick Vinales only 11th before their last runs were to come at a wet Valencia circuit.

The final runs saw a change in second place but Oliveira’s 1m40.771s was enough to get him into Q2 as Zarco improved with a 1m40.821s to make it in as well after pushing out both Bradl and Bagnaia, where the German will start 13th despite late Turn 1 crash.

Marquez slotted in 1th from Vinales – who is to start from the pitlane – as LCR Honda’s Cal Crutchlow was 16th from Bagnaia, with Rossi slotting in 18th from Ducati’s Danilo Petrucci, Aprilia’s Lorenzo Savadori and Avintia’s Tito Rabat, who had a late crash as well.

Despite sunshine at Valencia, the second part of European GP MotoGP qualifying started with riders using the wet tyres still. The lead changed hands similarly like Q1 but LCR Honda’s Takaaki Nakagami had enough pace to be in front of the battle.

He had Suzuki’s Alex Rins and Petronas SRT’s Franco Morbideli to give company initially but a late run from Pramac’s Jack Miller brought him in the game too along with KTM’s Pol Espargaro. Avintia’s Zarco was another one to run late in the session.

There was a late drama, though, with a crash for Nakagami in the final corner. The Japanese rider managed to continue but his day was affected severely. It changed the course in the MotoGP pole fight with Espargaro going quickest post the crash.

The lap of 1m40.434s was enough from KTM’s Espargaro to secure MotoGP pole in European GP at Valencia as he managed to beat Suzuki’s Rins and despite the crash, LCR Honda’s Nakagami remained third in the order to seal the front row.

A slight twitch from Zarco stopped his pole charge but he still managed to be fourth from MotoGP title leader Suzuki’s Mir as Pramac’s Miller was sixth from Aprilia’s Aleix Espargaro and Tech 3 KTM’s Oliveira as Morbideli was the leading Yamaha in ninth.

KTM’s Brad Binder was only 10th with Petronas SRT’s Fabio Quartararo 11th and Ducati’s Andrea Dovizioso 12th, as replays showed a moment for the Frenchman as the two MotoGP title contenders had a torrid time in qualifying.

What a cracking race we have in store tomorrow! 🏁@polespargaro starts from pole with title contenders scattered throughout the grid! ⏱️#EuropeanGP 🇪🇺 pic.twitter.com/ydmTirkkjb