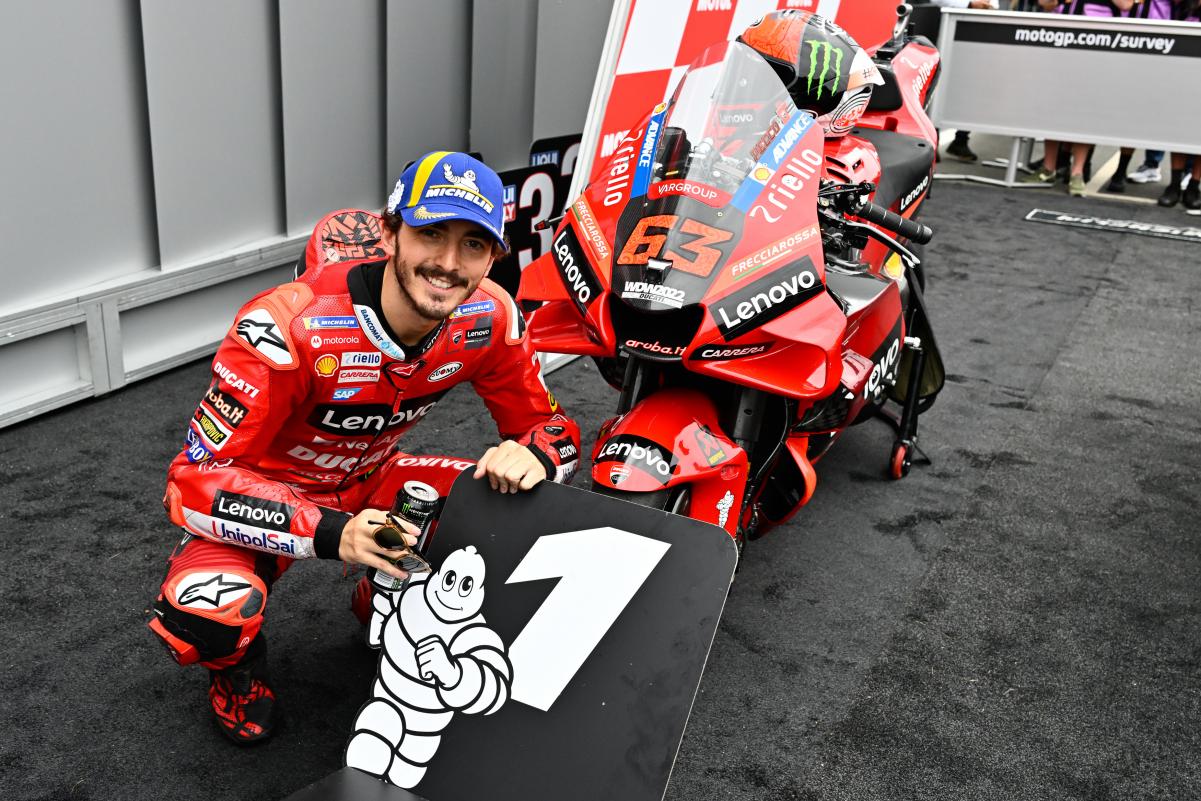 It was a clean start from pole-sitter Francesco Bagnaia on his Ducati to lead MotoGP Dutch GP at Assen under cloudy conditions. Behind him, the fight for second was on between Aprilia’s Aleix Espargaro and Yamaha’s Fabio Quartararo.

Despite the back and forth, Espargaro got ahead of Quartararo, with Pramac Ducati’s Jorge Martin in fourth from VR46 Ducati’s Marco Bezzecchi in the Top 5. He passed Ducati’s Jack Miller, who had a Long Gap Penalty to serve for irresponsible riding.

KTM’s Brad Binder was seventh from LCR Honda’s Takaaki Nakagami, Aprilia’s Maverick Vinales and KTM’s Miguel Oliveira in the Top 10. After Miller served his penalty, he dropped to 10th as Bezzecchi cleared Martin to move himself into fourth.

Moments later, Quartararo tried a move on Espargaro on the inside at the left-hander and he slipped taking the Spaniard along with him. The Aprilia rider had to go through the gravel to drop towards the end of Top 15, while the Yamaha rider got back up to the back.

He ventured into the pits but returned back, as Bagnaia continued to lead the MotoGP Dutch GP. The incident which will be investigated after the race, helped Bezzecchi to be second from Martin as Binder was fourth from Vinales in the Top 5.

Nakagami was sixth from Miller and Oliveira, Pramac’s Johann Zarco and Gresini Ducati’s Fabio di Giannantonio in the Top 10. The grand prix saw further crashes for Yamaha riders with Franco Morbidelli going down at Turn 5, while RNF’s Darryn Binder falling too.

Few laps later, Quartararo had another crash at Turn 5 which was a major highside. He hurt himself a bit to make it three Yamaha riders out of the grand prix. Nakagami, meanwhile, was handed a Long Gap Penalty for exceeding track limits too many times.

Before anything could settle down, rain flags were displayed by the organisers but no one dived to swap bikes, as Bagnaia continued to lead from Bezzecchi but Vinales moved up to third after clearing both Martin and Binder.

In fact, Miller cleared them too to be fourth with Binder in fifth from Martin. Behind them, Espargaro climbed back up to seventh bringing Suzuki’s Joan Mir along in eighth, as Oliveira was ninth from the other Suzuki of Alex Rins in the Top 10.

Gresini’s Enea Bastianini was 11th from Nakagami, who served his penalty. Up front, Bagnaia eventually eased to win MotoGP Dutch GP as Bezzecchi secured a handsome podium from Vinales, who fended off a later charge from Miller.

The Australian made it through at one point but went too hot which allowed Binder to close in on Miller. This brought Espargaro on their tail and the final lap move on both of them in the sequence of corners allowed the Spaniard to move up to fourth.

Espargaro took the inside line to made it through as a minor touch between Binder and Miller saw the latter take avoiding action to end up sixth. Martin was seventh from Mir, Oliveira and Rins in the Top 10, while Bastianini was just outside in 11th.

Nakagami ended up 12th from Zarco, di Giannantonio and Marquez in the Top 15 points position. The lone Yamaha of Andrea Dovizioso was 16th with VR46’s Luca Marini only 17th after he was tapped by Mir at the start of the grand prix.