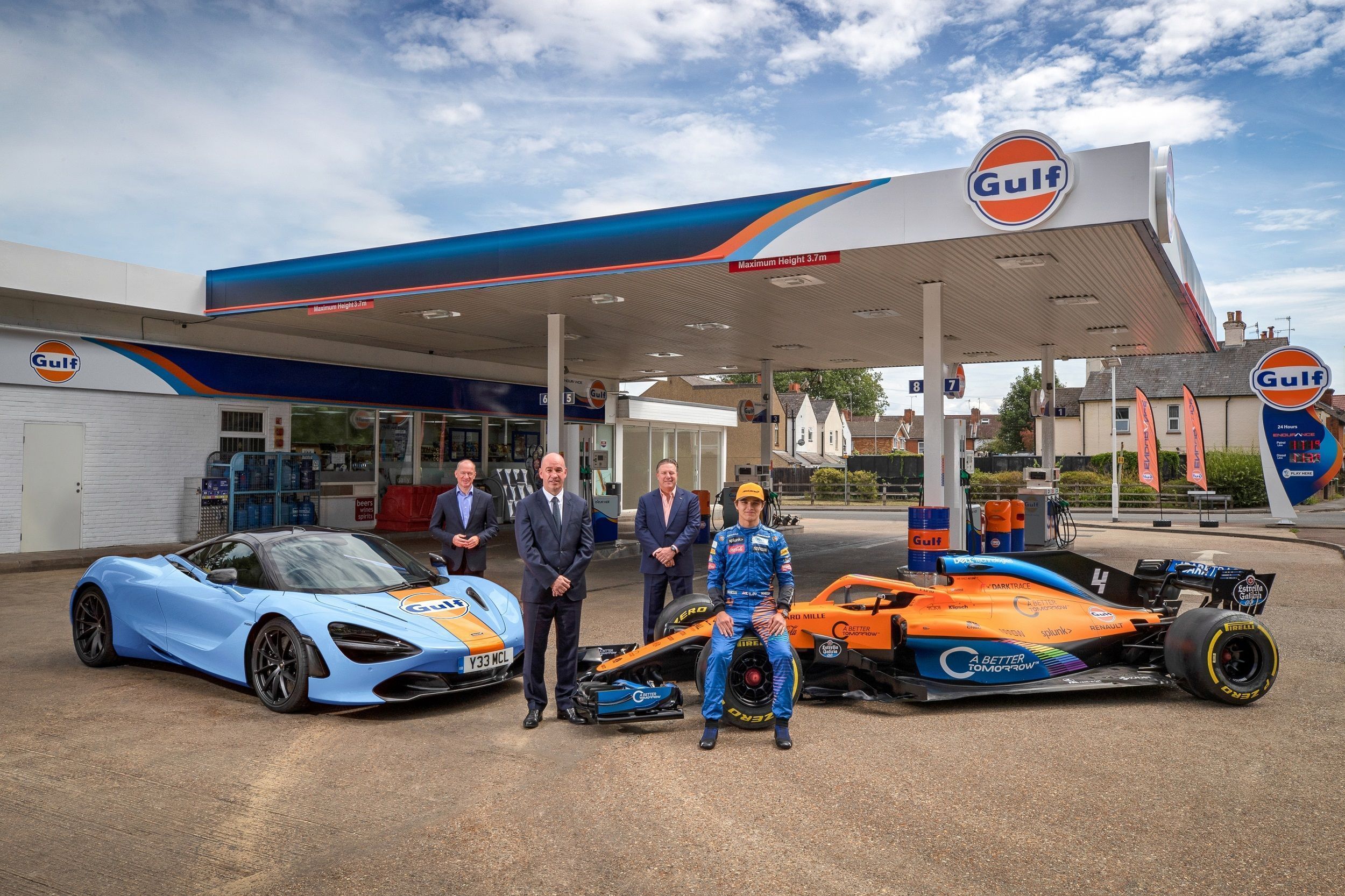 McLaren announced a new multi-year partnership with Gulf Oil starting from the British GP, which carries both F1 and Automotive side.

The news of a to-be partnership was already doing rounds since last week when McLaren were shooting in the United Kingdom with Lando Norris and Zak Brown present at a Gulf Oil petrol station. The team even teased with ‘coming soon’ photos.

The multi-year deal and re-unification was officially confirmed on Tuesday ahead of the British GP. The logo of Gulf Oil will be present on the car and team gear throughout the 2020 F1 season. On the car, it will appear on the engine covers and wing mirrors.

The deal not only caters to F1 but also its supercar side as Gulf Oil will become the preferred lubricant supplier to McLaren Automotive. The branding will also be displayed at PURE customer events as exclusive customers will get the option to change their liveries to the iconic theme.

Mike Jones, CEO, Gulf Oil said: “This is a very exciting partnership that brings the Gulf brand back into elite motor racing. The history books are full of remarkable tales that tell of what Gulf and McLaren have achieved in the past.

“Now we are together once more to write the next chapter of this unique partnership. We’re proud to be working alongside a brand that shares our future aspirations and our ambition for innovation both on the road and on the track. We look forward to working together and developing both Gulf and McLaren’s class-leading capabilities further.”

At the same time, Brown added: “We’re delighted to welcome Gulf back to McLaren and reunite two iconic brands back together in a new and exciting partnership. Gulf is part of McLaren’s history and are well-known for their innovation and technical excellence in the industry, with which aligns with McLaren perfectly. We are looking forward to starting our partnership together this season.”

And finally, Mike Flewitt, CEO, McLaren Automotive stated: “It’s great to be able to welcome back Gulf after a long historical association which has seen the name adorn many McLaren road cars and race cars over the years.

“McLaren has a rich history of working with class-leading partners and we’re delighted to continue this trend via our renewed partnership with Gulf. Like McLaren, the Gulf name is synonymous around the world with technical excellence and innovation and the excitement of going racing and motoring.

“Every supercar will have Gulf fuel and lubricants when it leaves the McLaren Production Centre and I know our customers will be thrilled to be able to work with our in-house bespoke team on the option of being one of the few to be able to personalise their McLaren supercar in the iconic Gulf livery.”

While the deal has been struck between McLaren and Gulf Oil, there is no mention if the F1 team will use its products in racing activities. The outfit is to switch to Mercedes from 2021 onward where Brown had told FormulaRapida.net last December that they are likely to use Petronas which comes with the German brand.

It’s official! We’re so excited to return to racing with @McLarenF1 and develop our road products with @McLarenAuto. Tune in to find out more on what we’re going to be doing together with our improved technology. 👇#GulfXMcLaren pic.twitter.com/Uw6DvLh9NM

Here’s what Zak Brown told us regarding Petronas